The interior of “NFT Skybar” is long and narrow. It opened on October 18, 2022. Photos: Frank Rumpenhorst (photos), dpa

Frankfurt’s skyline is famous: no wonder bars on the upper floors attract many visitors. But there are also exciting bars to discover at ground level in the nightlife metropolis.

The view is magnificent: From the 47th floor of the “One” high-rise in Frankfurt’s Europaviertel, it stretches across the city lights to the Taunus. With a cocktail in hand, the guest sits behind floor-to-ceiling glass windows in winter, and in summer the operators also want to set up chairs on the surrounding terrace. For security reasons, only exactly 199 people are allowed in the “NFT Skybar” at the same time, including staff. The line in the lobby of the “nhow” hotel, which includes the bar on the top floor, is similarly long at the end of the evening.

It is important to hotel manager Hermann Spatt that the bar is accessible to all Frankfurt residents and visitors. Hotel guests have priority, “but everyone is welcome,” he emphasizes. You cannot reserve a seat. Only the few guests who bought a digital artwork on the opening night, so-called NFTs, can safely enter. An artist had designed an NFT for each of the ten “signature drinks” created especially for the bar. On the drinks menu a “Banksy” made of gin, maple syrup and sherry, a martini with asparagus for 16 euros each or the alcohol-free “Mona Lisa” with lemongrass, ginger and green cardamom for 12 euros. 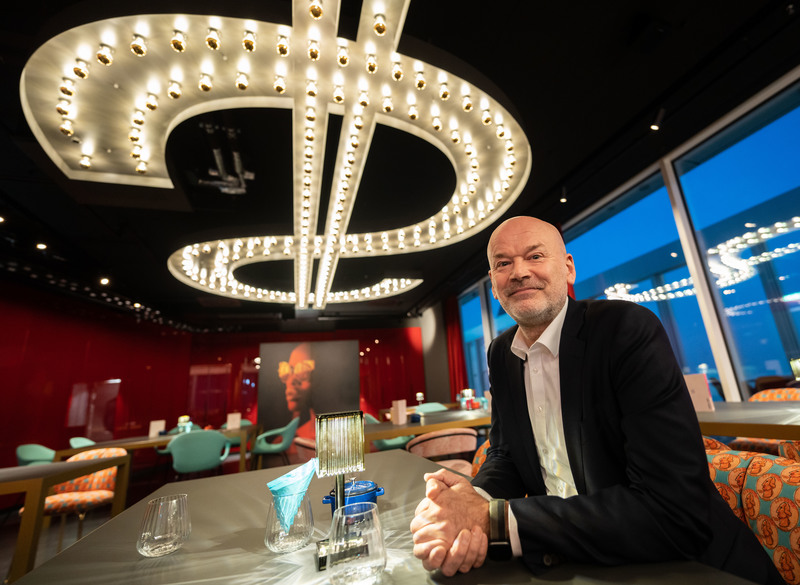 Hermann Spatt, CEO of “NFT Skybar”. The bar offers space for 200 guests at a height of 185 metres.

Design-wise, everything in the bar revolves around the topic of money. The wall behind the stairs, lined with colorful cushions, is covered in Bitcoin symbols, the bar stools are decorated with coins, and small round lamps form a dollar sign above the restaurant area, which is currently closed. Every “nhow” hotel has a thematic concept, Spatt explains, in Frankfurt the obvious choice was “money”, “but with a wink”.

Who has the tallest bar in town?

“NFT Skybar” bills itself as “Germany’s highest bar” – but that seems to be a matter of definition. The bar in the Maintower in the banking district is actually a few meters and several floors higher: the Panorama Bar under the viewing platform is on the 53rd floor and at a height of 187 meters the “NFT-Skybar” is on the 47th floor. only 185 meters high. According to marketing manager Jenni Oettel, the competition is two meters higher, but the gastronomy there is “not specifically declared as a bar”.

In the opinion of some Frankfurters, the only city in Germany with a reasonable skyline, there are other bars at high altitudes, such as the “Tøndebaren” on the 39th floor of the Henninger Tower in Sachsenhausen or the “Oben” on the 15th floor of the skyscraper “One Forty West” at the Senckenberg facility.

However, height is not the only thing that Frankfurt bars can score with. It is often the small, hidden bars that are worth a visit. The small bar “The Tiny Cup” with only a few seats in the building of the vegan star restaurant “Seven Swans” in the city center, e.g. Operator Sven Riebel was recently named “Host of the Year” by the bartending magazine “Mixology”. 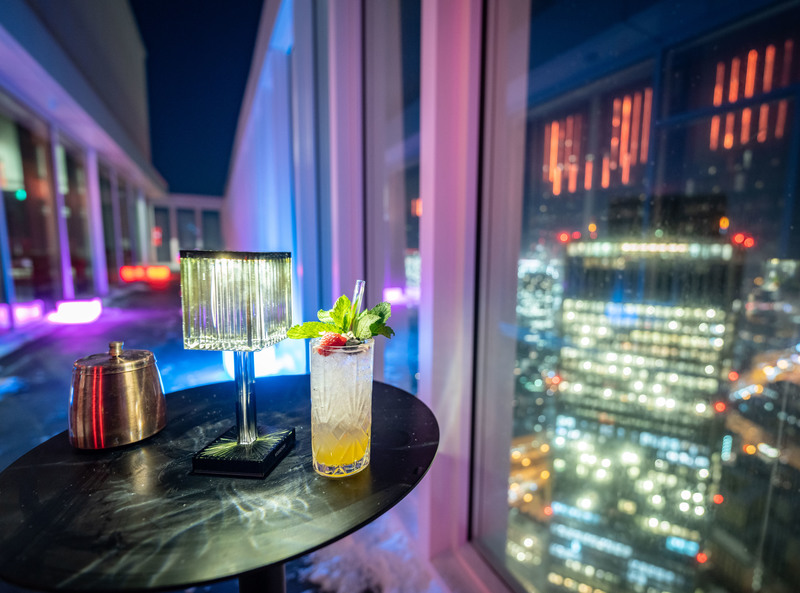 The view from the outdoor area of ​​the “NFT Skybar” in the “One” high-rise on the edge of Frankfurt’s exhibition center.

In the bar of only 17 square meters: subtle background music, two comfortable benches, pleasantly dim lighting. Living room atmosphere and working close to the guest are his goals, says Riebel, who opened the bar in 2015. The small space makes it easier to start a conversation. However, there is no compulsion to do so. A maximum of 18 guests could be accommodated. The bar is aimed at “friends of cultivated drinking culture” and offers reinterpreted cocktail classics – but without umbrellas, artificial cherries or pineapple decorations. Vermouth is currently in demand. And cognac is making a comeback, says the 44-year-old. There are 20 drinks on the menu, plus standards that a bar should have, such as the “Whiskey Sour”.

A classic among bars is back – albeit only temporarily: The legendary “Jimmy’s Bar” in the Grandhotel Hessischer Hof, which was closed at the end of 2020, has been open again since mid-December. Operators are Micky Rosen and Alex Urseanu, who have several other bars, restaurants and hotels in Frankfurt – until the hotel reopens. For decades, the dignified bar opposite the fair enjoyed cult status, and not just at the book fair.

For the 2023 edition, the gastro editorial staff of the magazine “Frankfurt geht aus” placed the bar “Yaldi” in the Bahnhofsviertel in first place in the category “Scene bars”. The “White Rabbit” in the city center and the “Hunky Dory” on Baseler Platz are the next places. When it comes to “classic bars”, the bar at the hotel “Roomers” is at the top of the podium, followed by the “Old Fashioned Bar” in Alt-Sachsenhausen and the “Logenhaus” at the northern end.