Their relationship has not been easy and problem-free for a long time, but now Egypt and Turkey will put their relationship on a new foundation. This is what Egyptian President Abdel Fattah al-Sisi and his Turkish counterpart Recep Tayyip Erdogan recently said at the opening ceremony of the World Cup. In the presence of the Emir of Qatar, Tamim bin Hamad Al Thani, the two heads of state shook hands and announced that they wanted to get along better in the future.

In fact, shortly after the meeting, relations between the two countries began to move. According to agency reports, intelligence delegations from both sides met in Egypt over the weekend. There were “significant” talks between them, an unnamed senior Turkish official told the Reuters news agency. Both sides discussed military, political and commercial issues, including energy projects, the official said. In addition, Turkish Foreign Minister Mevlut Cavusoglu said on Monday (28 November), both countries want to resume full diplomatic relations and appoint their respective ambassadors “in the coming months”. The two countries severed diplomatic relations at ambassadorial level in 2013.

Immediately after the meeting between the two heads of state, the Egyptian Foreign Ministry also announced that further steps would follow the meeting. The aim is to normalize bilateral relations after “years of tension”. But the negotiations that have been held so far have not yet led to a solution to the existing differences of opinion, it states restrictively.

The list of disagreements and rivalries between the two countries is long. These date back to 2013. At the time, the Turkish government had repeatedly described the army’s dismissal of then-Egyptian president Mohammed Morsi, who came from the ranks of the Muslim Brotherhood, as illegitimate. Erdogan called al-Sisi a “putschist”. After Egypt classified the Muslim Brotherhood as a terrorist organization and banned it, many Muslim Brotherhood members found protection in Turkey.

Conversely, the Egyptian government accused Ankara of supporting Islamist organizations – particularly the Muslim Brotherhood. The relationship remained strained for years. In the spring of 2019, Erdogan even declared that he had no intention of reconciling with al-Sisi. “I refuse to meet with an anti-democratic person who sentenced Morsi and his friends to prison,” Erdogan said at the time.

Also present in Turkey: The Muslim Brotherhood – here a demonstration in Istanbul in 2015

Most recently, however, Ankara had asked the Egyptian television stations operating in Turkey, which are affiliated with the Muslim Brotherhood or other opposition groups, to moderate their criticism of the Egyptian government. In fact, the Egyptian opposition’s options are increasingly limited, says Kristian Brakel, head of the Heinrich Böll Foundation’s office in Turkey. A number of Egyptian opposition figures are now toying with the idea of ​​settling elsewhere. “It cannot be ruled out that this trend may increase,” says Brakel.

Politically and economically, the two countries also faced each other as rivals in the civil war in Libya: while Egypt supported the strongman of the government-in-exile in Tobruk, Khalifa Haftar, with his help to prevent a possible government formation with the participation of Islamists, Turkey stood firm supported the then Prime Minister of the internationally recognized government, Fajis al-Sarraj. In 2019, she had entered into an internationally criticized agreement with him that redefined the maritime borders of both countries. According to this, Turkish sovereign territory would have extended to the vicinity of the Greek island of Crete. Turkey suspects significant gas deposits there.

So far, Egypt has clearly sided with Greece in the dispute over gas reserves. In the summer of 2020, both countries signed an agreement defining their respective economic zones in the Eastern Mediterranean. At the time, the Turkish government had criticized this agreement as a “pirate agreement”. 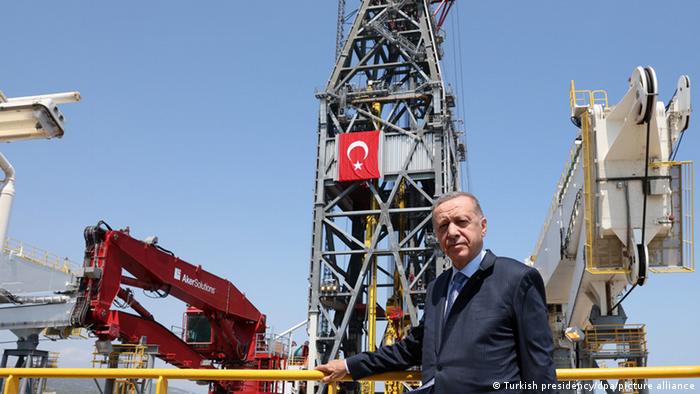 Ready to explore and interested in gas deals: Erdogan on board a Turkish drillship, summer 2022

Now, however, Ankara is apparently increasingly focusing on reconciliation and the search for a new partner. According to Brakel, Turkey also sends similar signals towards two of Egypt’s traditional partners, namely Saudi Arabia and the United Arab Emirates (UAE). For years, these three countries were partners in the international military coalition led by Saudi Arabia against the Houthi rebellion in Yemen. The two Gulf states also share the Egyptian government’s attitude towards the Muslim Brotherhood, in whom they see an ideological and power-political challenge and thus also a threat to their own autocratic rule.

Not least because of the high inflation, the government in Ankara feels compelled to adjust the course, says Brakel: “There are now significant financial injections from these countries in the run-up to the Turkish election campaign,” he says. It is quite conceivable that the two rich Gulf states would have made the solution of the Egyptian-Turkish problems a prerequisite for this.

At the same time, the two Gulf states are aware of Turkey’s geostrategic importance, shows an analysis from the online magazine Al Monitor. They also see the various investment opportunities that the Turkish market offers. Erdogan had already paid a visit to the UAE in February this year. Turkey has now signed several cooperation agreements with both countries. 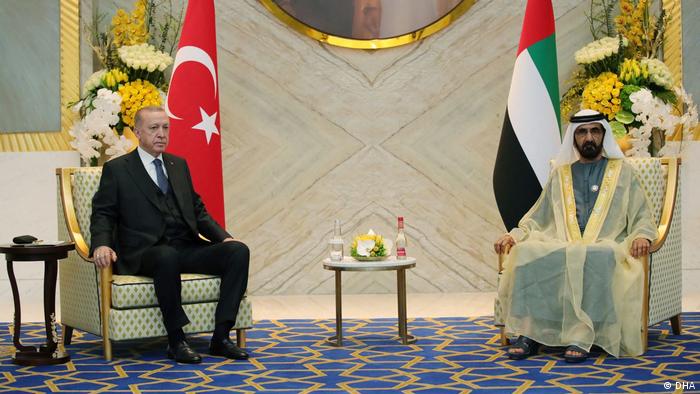 This should also encourage Egypt to expand trade relations with Turkey. According to a study by the Carnegie Middle East Center, the volume of trade between the two countries has already more than doubled in the past 15 years. In this way, both countries also tried to compensate for supply bottlenecks from Asia, especially China, caused by the corona pandemic, adds the English-language edition of the Turkish daily al-Sabah. In the eastern Mediterranean, too, the two states aim for an understanding. “This is the most important issue for Egypt and Turkey,” quoted Al-Sabah Ahmed Zikrallah, an economist who teaches at Al-Azhar University. “It seems to me that both countries are trying to find solutions together.”

All in all, however, the government in Cairo will probably have much less interest in the rapprochement than in Ankara, says expert Brakel. Because in Cairo, there is still one important reason to trust Greece more than Turkey in the Mediterranean: its membership of the European Union. “Greece offers Egypt access to the European market. This also makes it a much more attractive partner from Egypt’s point of view than Turkey could ever be.”