The Marshall Major IV impresses above all with its iconic Marshal design and as an ultra-compact commuter headphone. However, the sound is quite unbalanced and the processing quality is not as high as the price suggests.

Are you a fan of on-ears and cool design? Then Major IV, in typical Marshall style, is an obvious candidate. But what can the on-ear headphones in guitar amp design really do? We took a closer look at the Marshall Major IV in the test. 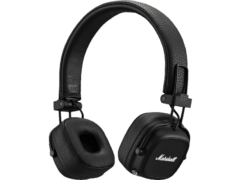 Marshall Major IV at a Glance

Marshall is not only famous for guitar amps, but also for headphones like the Major. The brand’s OnEar classic is now in its fourth generation. As on-ear headphones, it has the typical advantages and disadvantages of the design, but also tries to convince with a lot of style – and above all, a lot of battery. According to Marshall, the Major IV can run for up to 80 hours, partly because the headphones do not use energy-intensive noise reduction. The big question that inevitably arises with products focused on an eye-catching appearance remains: What does the Marshall Major IV hide behind the facade? With a price of around 150 euros, it is not exactly cheap. We looked carefully in the test – and heard.

If you want to compare: All on-ear models that we have been able to test so far can be found in our list of the best:

The design, the manufacturer’s product page, the brand’s lettering, even the short guitar riff that plays when you turn it on, everything points to the Marshall Major IV being a really rocking pair of headphones. You can hear his claim from the first note: your music jumps at you with Marshall Major IV without much hesitation, he is not shy. Bring Me The Horizon and Babymetal drive us in their song Kingslayer literally in front of you, you can really feel the drums rumbling through your head.

This power is still fun with the first few notes, but quickly becomes exhausting. At the same time, the Marshall Major IV throws powerful bass and overemphasized treble into your ear canal so violently that it simply becomes uncomfortable with longer listening times and at higher volume levels. At the same time, the sound pattern melts in the middle tones, which affects voices in particular. Unfortunately, Marshall headphones do not allow you to make adjustments via an equalizer. For our listening test with Silmarillion, spoken by Achim Höppner, for example we would have liked to take some bass out of the narrator’s voice. So the Marshall Major IV is definitely not neutral.

The design is not the only discipline in which the Marshall Major IV excels: there is also the battery life. According to Marshall, that’s 80 hours in wireless operation. It is remarkable: A Teufel Supreme On comes to about 25 hours, a Sony WH-CH510 to 35 hours. Should the Major IV then run out of power, it is quickly restored: 15 minutes of charging should fill the battery for 15 hours. A USB-C cable is included in the box, but the Marshall Major IV is also compatible with wireless charging stations should you need one.

Your music reaches the Marshall Major IV either via Bluetooth or via connector. A spiral cable is included for this purpose. You can also use this to connect two Marshall Major IV headphones and play the same music on both. The wireless connection is via Bluetooth 5.0. Unfortunately, the Major IV only supports SBC, you have to do without higher resolution Bluetooth codecs such as AAC or aptX.

Operation: Simple with a joystick

The operation of the Marshall Major IV is quite simple: on the right earcup you will find a joystick, as is used by many on-ear headphones. Here you can adjust the volume, navigate between tracks and answer calls, which is more tactile than headphones with touchpads like the Sony WH-1000XM5. The Marshall Major IV’s joystick is firm and responds quickly and accurately in our tests.

However, the small joystick is the only way to operate the Bluetooth headphones. There is no control app, which is now often found in models in Marshall’s price range. This also means that Major IV does not offer an equalizer and does not allow other personal settings. If you don’t need an app for your headphones anyway, it shouldn’t bother you much. Nevertheless, the Major IV falls behind comparable models such as the Teufel Supreme On. There is also no possibility of operation via voice assistant.

With rough edges: Major IV in the idiosyncratic Marshall design

With Marshall headphones, design plays a more important role in the purchase decision than with some other brands. After all, the products, like Marshall’s Bluetooth speakers, are known for the eye-catching design in the style of their own guitar amplifiers. The Major IVs do not disappoint on this front either. If you like Marshall design, then you’ve come to the right place. The idiosyncratic, angular shape of the earcups in particular catches the eye and makes the Major IV something special. In our opinion, the shape has no negative impact on wearing comfort: the padding is firm and in the right place without creating uncomfortable pressure points.

It also helps that the Major IV is light: it weighs just 165 grams. The headband in particular is light as a feather, which naturally improves wearing comfort. The padding is adequate, but not particularly thickly padded. It is made of thin leather-look vinyl wrapped around two thin plastic straps. The high-quality craftsmanship is different, but the headphones look nice and are comfortable to wear.

The headband is also much more flexible than we are used to from other on-ear or over-ear headphones. You can open and turn it very far. You can also use the hinge on the ear cups to roll up the headphones to save a lot of space. In our testing, the Major IV didn’t take any damage from our folding experiments, but we don’t recommend overdoing it due to the less robust materials.

The Marshall Major IV are comfortable on-ear headphones that are a real long-term companion with their excellent battery life of around 80 hours. At the same time, with the typical Marshall look, it also looks good and is more of a fashion item than other headphones. The simple operation and the flexible design are clear advantages, but unfortunately they also have disadvantages: In light of the lack of control app, there are no setting options and no equalizer. The sound of the Marshall Major IV is powerful and makes you happy when you first hear it, but it is not particularly balanced and quickly becomes tiring. The selected materials and workmanship are also not as high quality as the well-thought-out design suggests.

Overall, the Marshall Major IV is a competent pair of headphones, but it’s far from the most comprehensive or best-built model we’ve tested to date. In its price range, there are models that perform better on paper and in practical tests. Whether the price is worth it to you depends on what is important to you in a pair of headphones. If you value a cool design and simple operation and like to stuff your headphones into small pockets, the Marshall Major IV is a good choice.

You can find Marshall Major IV on MediaMarkt: 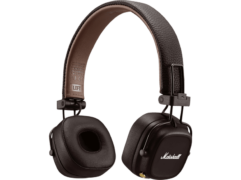 What do you think of Marshall Major IV? How important is design to you as a purchasing criterion? Tell us in the comments!