According to the results of a current study from the Karlsruhe Institute of Technology, seasonal heat and cold storage in underground rock layers can make a significant contribution to the decarbonisation of the construction sector.

The aquifer storage principle at a glance: Cooling in the summer (left) and heating in the winter is possible using the aquifers underground. Graphics: Ruben Stemmle (AGW/KIT)

The next complaint was made recently: Germany is still lagging behind in meeting the climate protection targets agreed at European level. The building sector in particular is still far from the targets set by the EU for 2030. More than 30% of the country’s final energy consumption is currently used for heating and cooling buildings. Researchers at the Karlsruhe Institute of Technology (KIT) have therefore investigated what opportunities the increased involvement of thermal aquifer storage could open up for the decarbonisation of this sector. In their study published in the journal Geothermal Energy in October 2022, they attest that the use of natural reservoirs has great potential to achieve an energy supply with lower emissions.

Aquifers in the subsoil therefore have a high ability to store thermal energy. The surrounding stone has an insulating effect. For example, heat from solar heating systems or waste heat from industrial plants could be stored underground by drilling, and the heated water could be pumped back up when needed, for example to supply heating networks or heat pumps, the Karlsruhe researchers believe. Low-temperature aquifer near-surface thermal energy storage (LT-ATES) has been shown to be particularly effective. Here, the temperature of the water is not much higher than that of the surroundings, so little heat is lost during storage.

More than half of the area in Germany is suitable

Researchers at the Institute for Applied Geosciences (AGW) and in the younger research group Sustainable Geoenergy from KIT have also investigated which regions in Germany are suitable for low-temperature aquifer storage. “The criteria for efficient LT-ATES operation include suitable hydrogeological conditions such as the productivity of groundwater resources and the groundwater flow rate,” explains Ruben Stemmle, member of the Engineering Geology research group at AGW and first author of the study. A balanced relationship between heating and cooling energy needs is also important. This can be determined approximately via the ratio between heating and cooling degree days. In a spatial study, the research team combined the hydrogeological and climatic criteria.

It was shown that 54% of the area in Germany – seen in perspective until the year 2050 – is very or suitable for low-temperature aquifer storage. The potential is mainly concentrated in the North German Basin, the Upper Rhine Graben and the South German Molasse Basin. 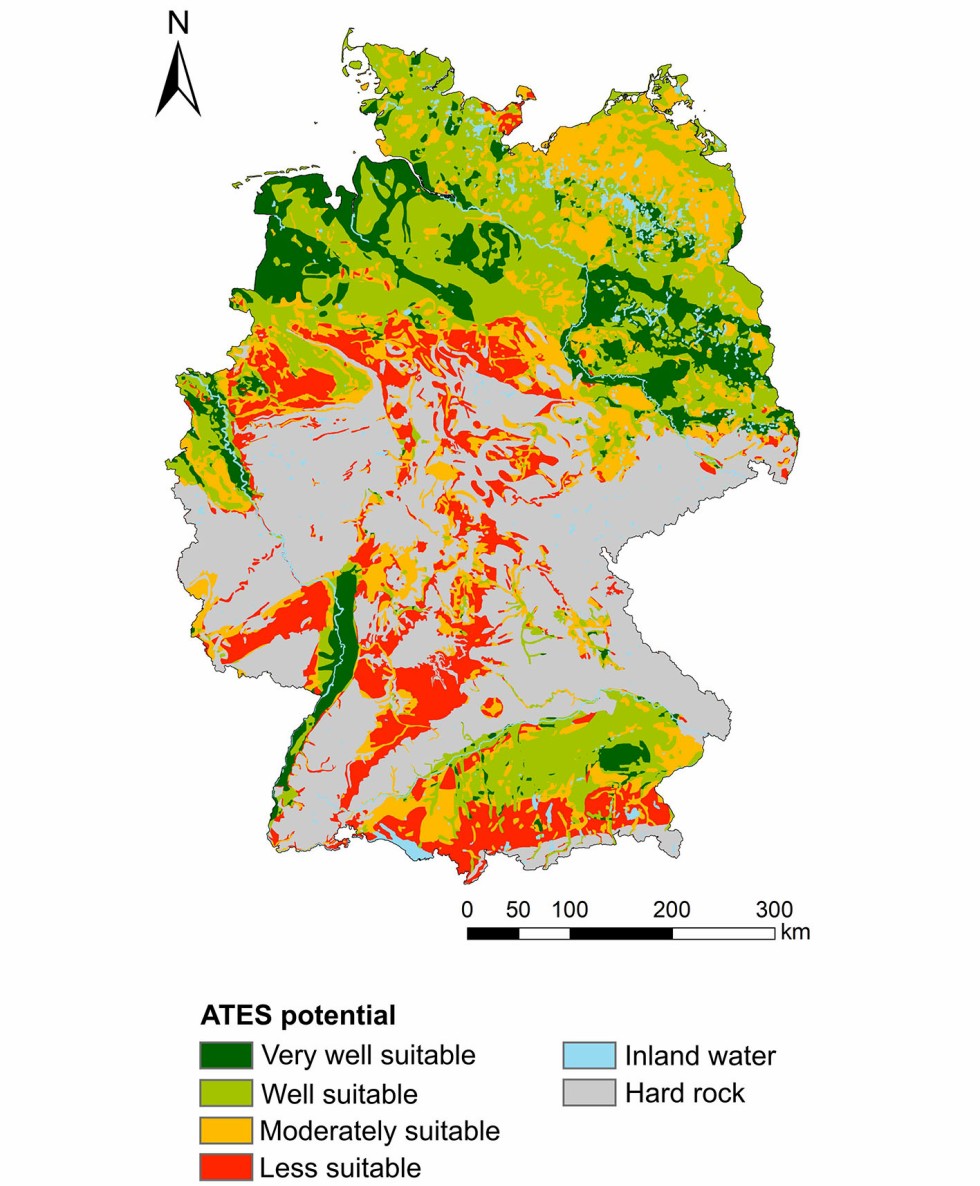 Researchers at the Karlsruhe Institute of Technology (KIT) have determined that Germany has significant potential for low-temperature aquifer storage, and that this potential is expected to grow in the future due to climate change. The map shows the storage possibilities for aquifers in Germany. Graphics: Ruben Stemmle (AGW/KIT)

In addition, the research team predicts that the very good or good areas are expected to continue to grow by 13% in the period 2071 to 2100. This is mainly due to a relatively strong increase in the very suitable areas and due to an increasing need for cooling – caused by climate change. In water protection areas, however, tank storage is only permitted to a limited extent and in individual cases. As a result, eleven percent of the technically very good or suitable areas are lost. “All in all, however, our study shows that Germany has great potential for seasonal heat and cold storage in aquifers,” Stemmle sums up.

Construction practice: What must be considered when awarding compensation benefits?

Consumers are rethinking their heating habits

BDH and en2x are testing the use of “green” fuel oil

Associations call for the current F-gas regulation to be maintained

Heat pump: air, ground or water – what are the differences?