About two months before the start of the ninth Formula E season, Porsche has officially presented its Gen3 car to the world. As in previous years, the German manufacturer uses the combination of black, white and red that is traditional for it. In addition to the car fashion show, there was an update on the test drive of the Porsche 99X Electric Gen3.

The first three years of Porsche works’ involvement in Formula E didn’t exactly wow fans of the brand. A narrow victory is on the credit side so far. In the team classification, they never got better than seventh place. But with the major turning point in the electric series, Weissach’s electric project should finally turn onto the road to success.

The third generation of Formula E vehicles, which will be introduced in 2023, is bursting with superlatives. The series manufacturers are talking about the fastest, lightest, most powerful and most efficient e-racing car format the world has ever seen. Impressive figures such as 350 kilowatts of power (476 hp), 600 kW maximum recovery and potential top speeds of up to 320 km/h underline the significant leap compared to Gen2.

The officially registered manufacturers DS, Porsche, Jaguar, Nissan, Mahindra and NIO, who have tested the new cars intensively in recent months, are responsible for implementing these ambitious goals. Most recently, their customers, including the big names McLaren and Maserati, have interfered in the demanding preparations. The big challenge: The combination of standard components such as chassis and battery with the in-house developed drive.

The new Formula E generation is narrower and more robust than its predecessors.

More action on the slopes

After the first test rounds, the Porsche drivers reported that the handling had changed significantly compared to the last generation. Due to the massive acceleration and the higher speeds, it has now become more important to get out of corners cleanly.

A lot has also happened optically with the model change. The wheels are freer than on the predecessors. Overall, the construction is more robust. In the past, fenders used to fly when they came into contact with an enemy. Due to the higher speeds and narrower cars, even riskier racing is expected. However, it is not yet clear how the new vehicles will behave in traffic. This has not been tested yet.

Technically, there are also a few question marks. The standard batteries, which are made from sustainable minerals in the Gen3 cars, caused problems during the first rounds of testing by all teams. They must store excess energy when decelerating thanks to ultra-high-speed charging with an output of up to 600 kW. Whether the planned fast loading feature will be introduced as a strategy element is still questionable due to the issues. 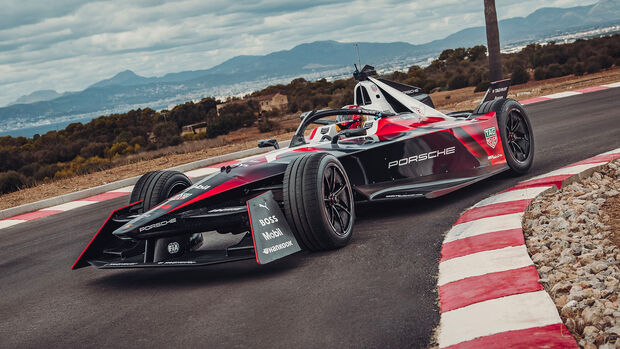 During the first test runs, almost all teams struggled with problems with the standard battery.

The manufacturers themselves are responsible for the rest of the drivetrain. The homologation phase is currently underway. At Porsche, we are confident that the hardware will live up to our high standards. But you won’t see how competitive you really are until the start of the season on January 14th in Mexico, when all the teams put their cards on the table.

Porsche has not only added technology, but also personnel. Antonio Felix da Costa has joined the works team from DS Techeetah and replaces André Lotterer as Pascal Wehrlein’s teammate. The 2020 champion knows how to win races and titles.

The Portuguese has already settled in well during his first test rides: “As new to the team, I spent the last few weeks getting to know the engineers and mechanics and finding my place. The team made it very easy for me. I felt comfortable from the start felt comfortable. Porsche is a brand that stands for victories. We want to deliver them as soon as possible with the new Porsche 99X Electric Gen3.”