The good news first: LEGO began shipping the sets from the second round of the BrickLink Designer Program to pre-orderers just over a week and a half ago, and according to various letters, many sets have already reached customers. However, there were also isolated issues with payment processing and the double points initially shown from the LEGO VIP weekend promotions and from December 2021 were not credited.

In this article we would like to give you an overview of the kits that are now being supplied and also briefly address the above issues. These are the drafts that you could vote on between November 9 and December 14, 2021 in the second crowdfunding phase of the BDP.

The sets of the second BDP round at a glance

A total of nine designs competed in the second round of the BrickLink Designer Program, but only the five most crowdfunded were actually produced by LEGO as sets. As our readers correctly predicted in a poll, the Modular LEGO Store, Venetian Houses, Retro Bowling Alley, Mountain Windmill and Clockwork Aquarium all came out on top. 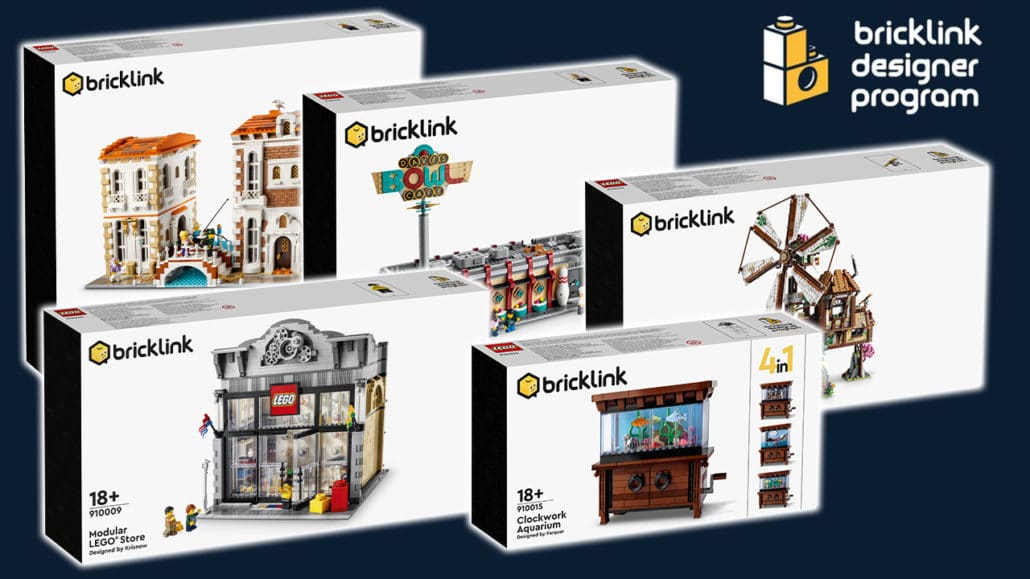 The maximum capacity of 10,000 copies produced was only reached by the first two sets mentioned. Interestingly, the LEGO Store even produced a few more copies – probably due to a technical glitch. These two sets sold out in relatively short order, while sales of the remaining three designs were slower, all eventually leveling out between 8,000 and 9,000 copies before the crowdfunding phase ended on December 14, 2021.

At that time, LEGO had promised to deliver the sets from this round to the third quarter of 2022, i.e. for the period between July and September, which has now been exactly fulfilled with the shipment that has now started.

Construction instructions can be downloaded

Fortunately, the building instructions for the sets that have now been delivered have now also been made available online by LEGO, many thanks for the many tips that have reached us in this regard. You can either call this up via the LEGO building guide app or download it the classic way as a PDF. You can find the instructions on the linked design pages above on BrickLink, or you can simply follow our direct download links to the PDFs from the list below.

LEGO’s statements on the subject of double VIP points if you ordered the sets during the VIP weekend or during the December promotional period were apparently less reliable than the delivery time forecasts. And even with the settlement of the payment, there are apparently isolated problems.

The crowdfunding period overlapped with LEGO last year VIP weekends on 20 and 21 November, which included a double VIP points promotion on all purchases. We had previously had LEGO customer service confirm that this promotion would also apply to the BDP sets:

thank you for the good conversation.

As mentioned, the double VIP point weekend can be combined with the BrickLink Designer program.

I wish you a lot of fun collecting points 🙂

LEGO itself also stated in the BDP FAQ on BrickLink that VIP points could be collected, but without any indication of how double point actions would be handled. When the VIP weekend finally started, LEGO made it clear in the fine print on the promotion page of the LEGO online shop that not only were the BDP sets excluded from the free gifts, but they were also excluded from the 2x VIP points promotion.

As you may have noticed, the “spontaneously” inserted Venetian houses (910023) were not out of the question under these conditions, and the double points for all BDP sets were even displayed in the shopping cart. So much confusion and conflicting statements, with the result now that LEGO apparently for all sets only simple VIP points credited even if they were ordered as part of the promotional weekend. This is correct according to the final campaign conditions, but not for the Venetian houses. It also contradicts what was displayed in the shopping cart during the ordering process.

Between 10 and 12 December 2021 Finally, there was another campaign with double VIP points, according to which none of the BDP kits excluded – here too, LEGO only credited the simple VIP points with the delivery, at least in our sample.

So we recommend you: Be sure to check again whether the VIP points in your BDP order were reserved correctly if it fell in one of the above periods. Our self-experiment showed that after a friendly complaint, the customer service, citing the conflicting communication and the fact that the double points were also displayed in the shopping cart, even for the sets that were excluded during the VIP weekend the other half of the points are subsequently credited Have.

We cannot legally judge the extent to which you are entitled to the double points, but at least in the case of the Venetian houses and for all sets from the order period between 10th and 12th December 2021, it is most likely worth contacting the customer polite service again to follow up. You may still have to contact LEGO involuntarily, as we have heard of isolated invoicing issues when paying for pre-orders.

As the kits from the BrickLink Designer program are pre-orders, the payment information and corresponding confirmation were entered nine months ago. There are now isolated reports of customers receiving reminders or requests for payment, even though payment was correctly made in advance when the order was placed. I can also personally report a similar case from the recent past, but we will address this topic in more detail in a separate article if necessary.

For the time being, we just want to point out that currently at LEGO partially lost payment information for orders from a long time ago go, which then means that you must actively contact customer service and will be asked to do so Proof of payment to submit. As far as we know, this happens by payment via Bank transfer (advance payment) and gift card Before. that We cannot estimate the frequency at this timeso it would be very helpful if you contact us in the comments or via email if you are also affected.

Have your kits already been delivered and have you set them up yet? How happy are you with it? Are you perhaps affected by the invoicing problem and have your VIP points been booked as expected? Feel free to share ideas in the comments!