Candela now offers more to the eye: The new C-8 immediately catches the eye with its reduced, modern exterior. It looks dynamic – and the boat must actually be incredibly fast. At the Helsinki Inwater Boat Show a few weeks ago flow look at it, a little later it went around Cannes and only recently it was buzzing around at Interboot Friedrichshafen on Lake Constance.

Exactly: Candela C-8 is really everywhere. As with the first C-7 model, behind the more modern design of the second motor yacht from the Swedish innovation leader is an electric foil drive that gets the boat flying in no time. Economy and driving experience are revolutionary.

The manufacturer himself talks about “the magic of the flying carpet”. “Flying” is made possible by the hydrofoils under the fuselage, called foils. In combination with an in-house developed electric drive, which develops up to 50 kW of power on an extendable shaft, they lift the boat out of the water at speeds of 17 knots and thus ensure extremely reduced frictional resistance.

Riding a candela is like bathing in a hot spring © Candela

The C-POD, as Candela calls it, works in coordination with a sophisticated sensor system that stabilizes the boat “in flight” even at high speed. With the Candela C-8, this is up to 30 knots, almost silently. The manufacturer states the working speed at 24 knots. According to Candela, this costs about 1.1 kilowatt-hours of electricity per nautical mile, which is equivalent to about 0.13 liters of gasoline. This means that the C-8 uses less energy on average than a modern small car over a distance of 100 km.

The battery allows a range of at least 60 nautical miles at operating speed. After these approximately 110 kilometers, the energy storage unit is recharged in about 3 hours using a three-phase power source (three-phase current) with 32 amperes. This is very fast compared to current technical solutions on boats. With the Schuko plug, it takes 20 hours. Like the C-POD, the foils are maintenance-free and last a lifetime, Candela promises. 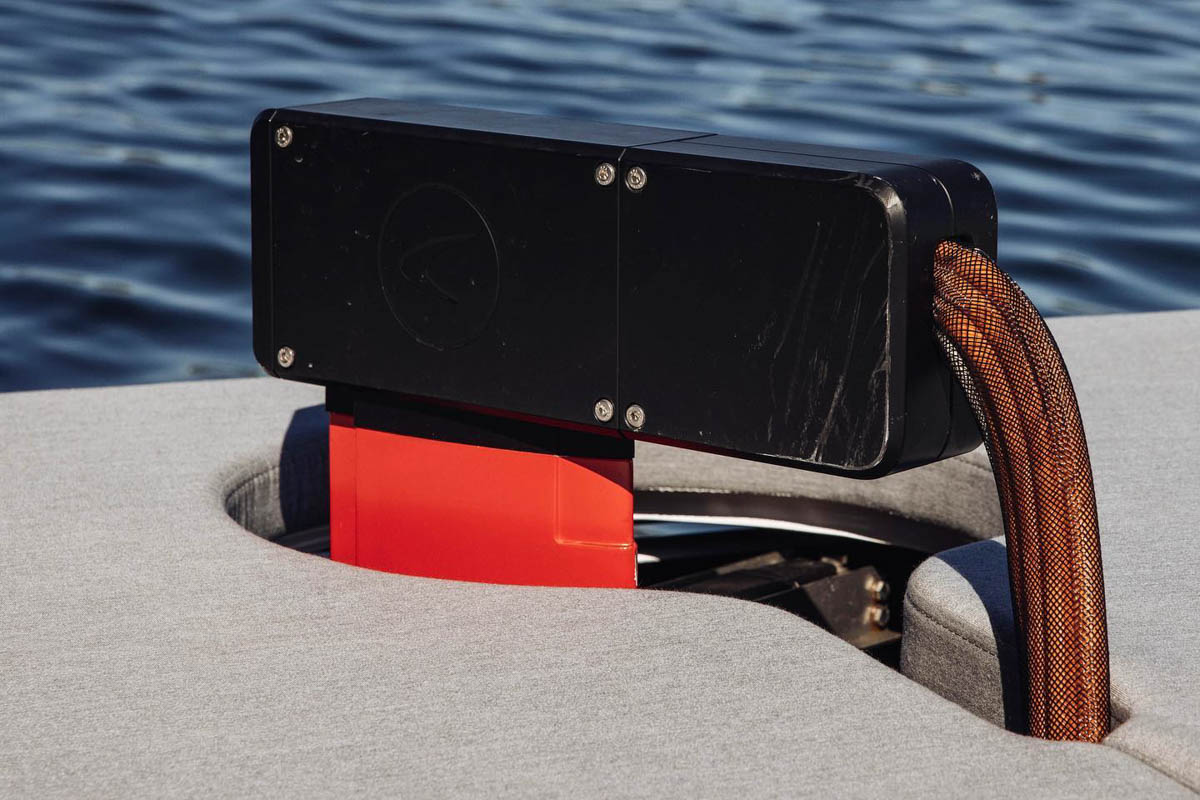 The foils are retracted and extended as needed. The thick cables supply them with energy © Candela

The Swedish entrepreneur Gustav Hasselskog has thus reached another milestone on his journey. Candela C-7 in retro look, winner of the BOB Award 2019 thanks to the revolutionary technology, gets a modern, almost minimalistic design boat with C-8. Its stem is almost vertical, the windshield is elegantly rounded, the sidewalls are flat at the top, creating a strong visual impression of dynamism. 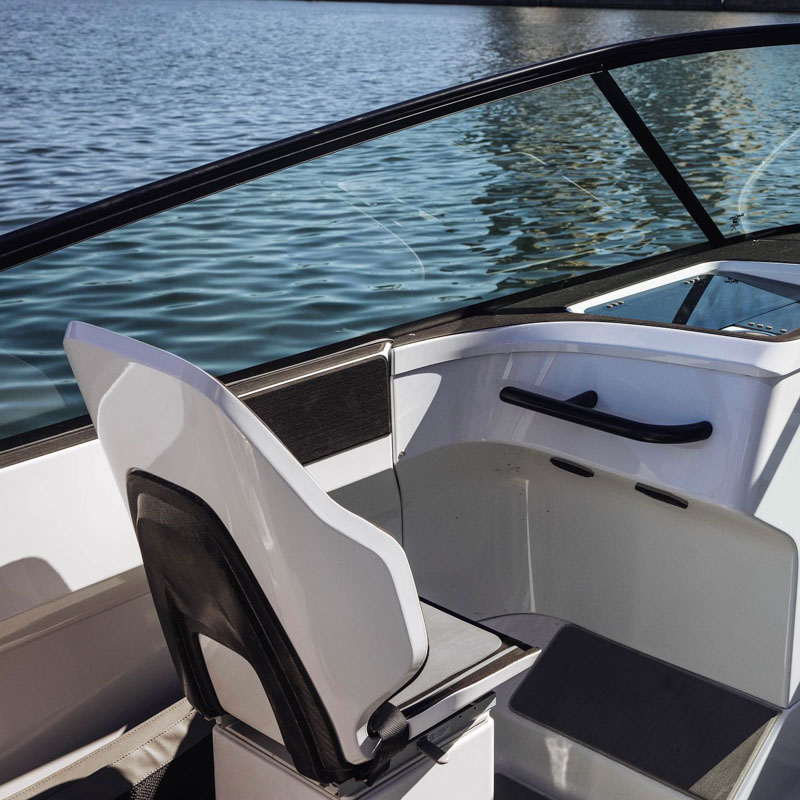 Individual seats in the cockpit © CandelaThe hull grew by 80 centimeters to 8.50 meters in length. It is made of carbon fiber reinforced plastic (CFRP). The complete boat weighs only 1,800 kg. Its interior has been noticeably upgraded: the C-8 is more than an electric runabout. She has a cabin with two berths, which is lit by a skylight in the forecastle. A hardtop with integrated fabric roof that can be opened is also available as an option for the open cockpit, covering the three individual seats in the helm station and the bench seat behind.

Minimum draft of up to 0.5 metres 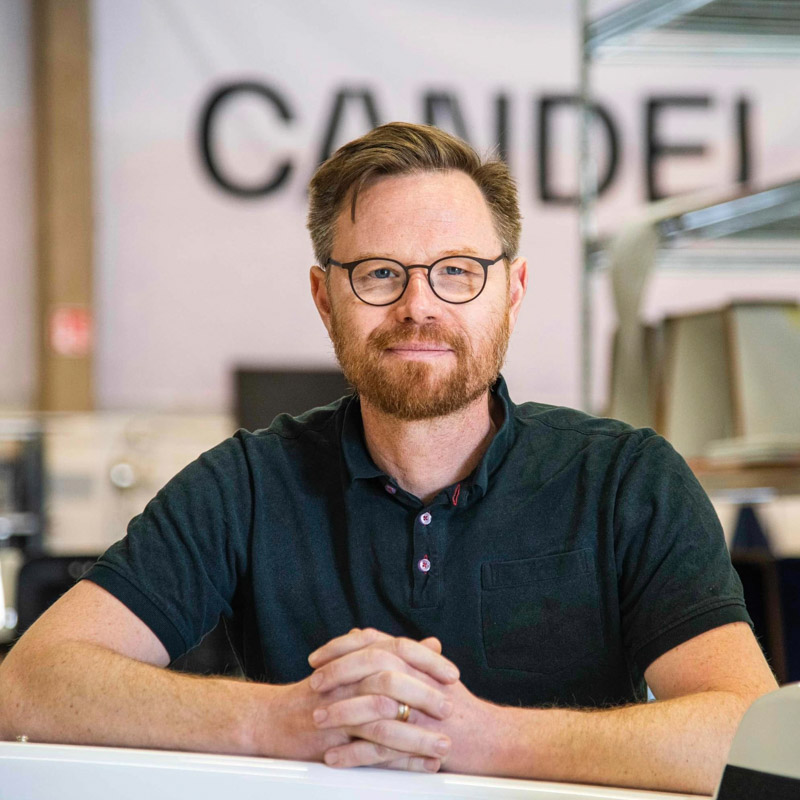 The founder Gustav Hasselskog © CandelaThe draft of the hull depends on the trim of the foils and the propulsion unit. In “shallow water” mode, the Candela travels over water depths of up to 0.5 meters without touching the ground. When “gliding” for trips up to 20 knots with extreme wave height, shallow areas of up to 0.9 meters can be easily crossed. With “foiling” with the highest efficiency, even 0.8 meters above the ground are possible. When driving slowly with the foils extended, the draft is 1.5 metres. In any case, up to eight people can ride along.

Two hull and two upholstery colors are optional. The price of 345,100 euros includes engine, batteries, a proprietary navigation system with a 14.5-inch screen in the cockpit and the smartphone app. As is common today with cars.