With the Polestar 3, the Swedes are entering the electric SUV segment. With the Polestar 3, which has an output of up to 380 kW, the Geely subsidiary is introducing a radar-monitored interior for the first time. Thanks to the 111 kWh battery, the range should be on par with an internal combustion engine.

The first SUV from the electric car brand Polestar competes with the Porsche Cayenne in terms of size, price and performance: the 4.90 meter long and 360 kW (490 hp) 3 Series is the largest model from the Geely subsidiary to date. The basic price is 89,900 euros. At launch, all variants are equipped with a rear-mounted, twin-motor powertrain with torque vectoring via a dual-clutch system on the rear electric motor. One-pedal driving is just as possible as energy-saving rolling with the front electric motor.

In the basic version, the engines deliver 360 kW and 840 Nm. The targeted WLTP range is 610 kilometers. Energy is provided by a 111 kWh, 400 volt lithium-ion battery. The 17 modules with 204 prismatic cells are housed in an aluminum housing. Charging takes place at the wall box with up to eleven kW and at the DC fast charger with up to 250 kW. There is also an adaptive two-chamber air suspension and active shock absorbers. The technical foundation for the Polestar 3 is provided by the SPA II platform, which will also underpin the next Volvo XC90.

The Polestar 3 accelerates from zero to 100 km/h in five seconds. The optional performance package adds 20 kW and 70 Nm for an additional 6,600 euros. This means that the sprint from a standing start is three tenths of a second faster. The top speed of both models is limited to 210 km/h. In addition to the extra power, the performance package includes 22-inch wheels instead of the standard 21-inch wheels. There are also details such as Swedish gold seat belts and a laser-engraved light strip in the interior.

The power of the electric motors and the capacity of the battery are simply on the page: 380 kW with the performance package, 111 kWh both models.

Typical of the Volvo sister brand is the interior with a central 14.5-inch display and a smart choice of materials: the customer can choose between microfiber, leather or wool. The leather is animal welfare certified and the origin of the wool is traceable.

Nvidia and Snapdragon in the cockpit

There is a Polestar premiere in the cockpit: the 3 is the brand’s first model with an Nvidia Drive Core computer. It uses Volvo software to process data from the car’s sensors and cameras. The software must remain up to date via over-the-air updates without having to drive to the workshop. For passenger entertainment – such as sound system, screens and smartphone pairing – Polestar uses Qualcomm’s Snapdragon cockpit platform. 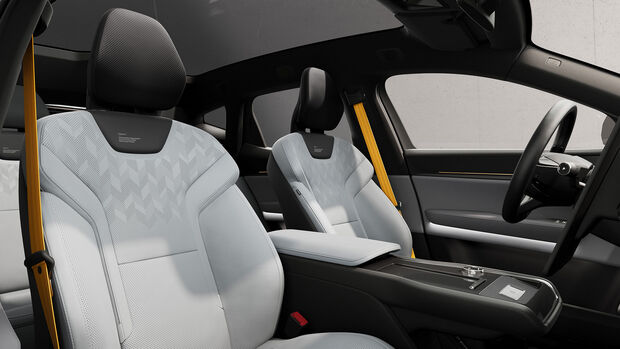 The interior protects children and pets with radar monitoring.

For the first time, radar sensors in the interior monitor the movements of passengers. This is to prevent, for example, children or pets being left in the stationary car and exposed to temperatures that are harmful to health. While driving, two cameras ensure that the driver remains alert. Smart Eye cameras monitor the eyes of the person behind the wheel. If this is distracted, there are messages and tones. If necessary, the software initiates braking.

A total of five radar modules, five external cameras and twelve ultrasonic sensors monitor the car and its passengers. An announcement in the direction of Tesla, because the competitor from Texas plans to rely exclusively on cameras in the future. For Polestar, the “smart zone” in front becomes a design feature: A heatable radar module, a camera and other sensors are placed under the front air vent.

Production in the USA and China

CEO Thomas Ingenlath said some time ago about the Polestar 3: “We want to build for Americans in America”. The new model will be produced at the Volvo factory in Charleston, South Carolina, where the upcoming XC90 will also be built. Volvo enables Polestar to achieve cost savings through financial and industrial synergies; In addition, Polestar should benefit from the Swedes’ safety technologies. In addition, local production will also have an impact on pricing and the carbon footprint. First, the Polestar 3 will be manufactured in China. Production in the US will begin in mid-2024.

The Polestar 3 can be ordered online now in North America, Europe and China. Ingenlath believes that as a “premium electric performance SUV, it will define the design of SUVs in the electric age”. The premium SUV segment is the fastest growing in the US market. The company also assumes that switching to fully electric vehicles will be the fastest. The Polestar 5, to be launched in 2025, is the first to say goodbye to the SUV segment. With a flat front, it also strives for good aerodynamics.

CEO Ingenlath also promised in November 2021 that the Polestar 3 will be one of the most climate-friendly cars ever. Only recently has Volvo, a major shareholder in Polestar, calculated in a life cycle analysis for the C40 Recharge how electric cars must produce fewer CO2 emissions in the future.

Polestar comes standard with 3 LED lights, glass roof and 21-inch wheels. The Pilot package with Luminar lidar and the Plus package also include additional extras at launch, such as a Bowers & Wilkins sound system and a head-up display. The Pilot package includes an additional Nvidia controller, three cameras, four ultrasonic sensors and a cleaning function for the front and rear cameras. Real-time data and an improved 3D scanning of the environment should equip the Polestar 3 with autonomous driving capabilities.

Ingenlath presented the brand’s vision and growth goals to investors in November 2021. The Polestar boss emphasized that the brand is already represented in 14 markets worldwide. By the end of 2023, the brand aims to expand its presence to at least 30 global markets. Polestar plans a tenfold increase in global sales from around 29,000 vehicles in 2021 to 290,000 vehicles in 2025. “From now on, Polestar is all about growth,” says Thomas Ingenlath.

With the 3, Polestar introduces an electric SUV with the same performance and price as a Porsche Cayenne in the world of combustion engines. The range should also not cause range anxiety at 610 kilometers. A disadvantage of the 111 kW battery, however, is its weight: the power storage drives the empty mass to at least 2,584 kilograms.