Dusseldorf Investors saw the preliminary strong recovery in the leading German index Dax in the past trading week as an opportunity and took advantage of it. Many of them have dumped their unwelcome equity positions from their portfolios. Sentiment expert Stephan Heibel draws this conclusion after evaluating the Handelsblatt survey Dax-Sentiment and other indicators.

This has increased liquidity among private investors. So in the event of another downturn in the stock market, they will not be so heavily exposed. “It will be difficult for downside momentum to establish; downside moves should lose momentum early in the coming days,” explains Heibel.

As expected at the beginning of the last trading week, the extreme sentiment values ​​last Monday led to a significant recovery in the financial markets. At the beginning of the week, the Dax rose by six percent, although the announcement of a cut in daily oil production by the Opec plus cartel is likely to weigh on the economy and further fuel inflation.

As the week progressed, most of the recovery movement was abandoned. Surprisingly strong US jobs data, which should also keep inflationary pressures high, finally led to a sell-off on Friday afternoon. In a weekly comparison, there was only a paltry plus of 1.7 percent left in the Dax.

Find the best jobs now and
get notified by e-mail.

But the recovery has done little to mitigate the extremely downbeat sentiment and extreme pessimism among investors. Although the sentiment data no longer reaches the extreme values ​​of the previous week, there is a lot of skepticism about the recovery. “Investors mostly expect the bear market to continue,” concludes Heibel.

This skepticism is particularly evident in the five-week average of the sentiment indicator, which has barely recovered from the previous week’s record low. 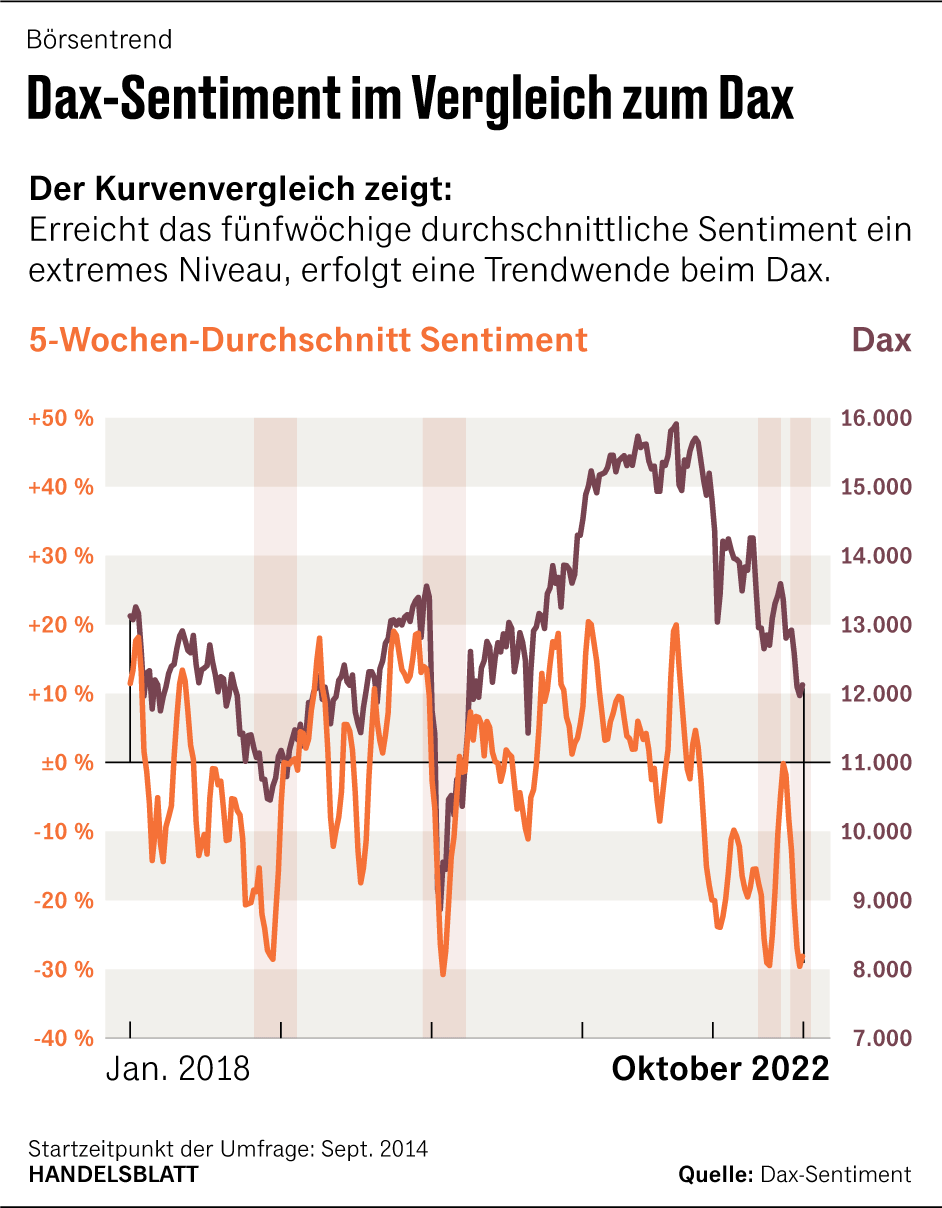 But what is missing for a sustainable trend reversal is the final divestment. A final sell-off denotes a situation where many investors dump their shares on the market regardless of prices and fear even greater losses. Prices drop significantly with high trading volumes.

Since there are no other sellers to lower prices for a long time, this is often the end of a correction. As long as this final sell-off is lacking, the markets will remain in an intact downtrend with intermittent price recoveries. There was exactly such a short-term price recovery in the last trading week.

With a value of minus 5.0 after minus 6.9 in the previous week, investor sentiment remains extremely low. Uncertainty also remains at a high level of minus 3.7.

Future expectations remain pessimistic with a value of minus 0.6. So-called bears, who expect falling prices, continue to dominate the bulls, who bet on rising prices.

At any rate, there is still a moderate willingness to invest with a value of plus 1.7. However, due to the negative sentiment, these are only speculative investments that should be quickly liquidated again after moderate price increases.

With a value of minus 2.5, the Euwax sentiment on the Stuttgart stock exchange, where private investors trade, shows only a moderate hedging tendency against falling rates. Negative values ​​mean that private investors are more likely to bet on falling Dax quotes and vice versa. This value has remained constant in a weekly comparison. It shows that many investors have hedged against falling prices when the Dax prices have risen in the meantime, leaving them in the black with their short products.

The put-call ratio for institutional investors who hedge via the Frankfurt futures exchange Eurex is relatively low at 1.1. With put options, investors benefit from falling prices or hedge price risks, with call options they benefit from rising prices.

The professionals wind up their hedges at the current level. In the US, investors remain cautious. CBOE’s put-call ratio continues to show strong interest in put protection.

US fund investors have slightly increased their investment ratios again. After only 13 percent in the previous week, 38 percent of the capital is already positioned long this week, i.e. at rising prices.

Extreme fear in the US market

The bull-bear ratio for US private investors is minus 31 percent and shows a clear overhang of the bears. However, the extreme values ​​of the previous two weeks, each with more than minus 40 percent, were no longer reached.

The “Fear and Greed Indicator” for the US markets, calculated from technical market data, is trading at 25 percent, signaling extreme fear in the market. Short-term technical indicators, on the other hand, are already back in neutral territory after a few days of the recovery rally.

There are two assumptions behind surveys like the Dax sentiment with more than 7,000 participants: If many investors are optimistic, they have already invested. Then there are only a few left who could still buy and thus drive prices up.

Conversely, if the investors are pessimistic, the majority of them have not invested. Then only a few can sell and thus push the lanes down.

Would you like to participate in the survey? So let yourself be automatically informed about the start of the sentiment survey and sign up for the Dax sentiment newsletter. The survey starts every Friday morning and ends on Sunday afternoon.

More: Investors make these ten mistakes from the point of view of stock market psychologists