9 September 2022 – A survey shows that around 46 per cent of respondents are in favor of promoting digital skills from primary school onwards. The population’s dissatisfaction with digital education is particularly high in Bavaria (25.3 percent) and Baden-Württemberg (28 percent).

The new school year has started throughout Germany, in Bavaria and Baden-Württemberg the summer vacation ends this week. In the classroom, digital skills are in greater demand than ever. According to a current representative population survey by the Association of the Internet Industry Eco
and the market and opinion analysis company Civey
64.2 percent of the respondents demand that children learn at school how to counter bullying and hate on the Internet. 58.7 percent of respondents consider safe use of the Internet and basic data protection knowledge to be relevant. The connection between the subjects of digitization and sustainability is also a relevant topic that must be addressed in school. About a third of those questioned are in favor of putting this context more in focus in the curriculum. 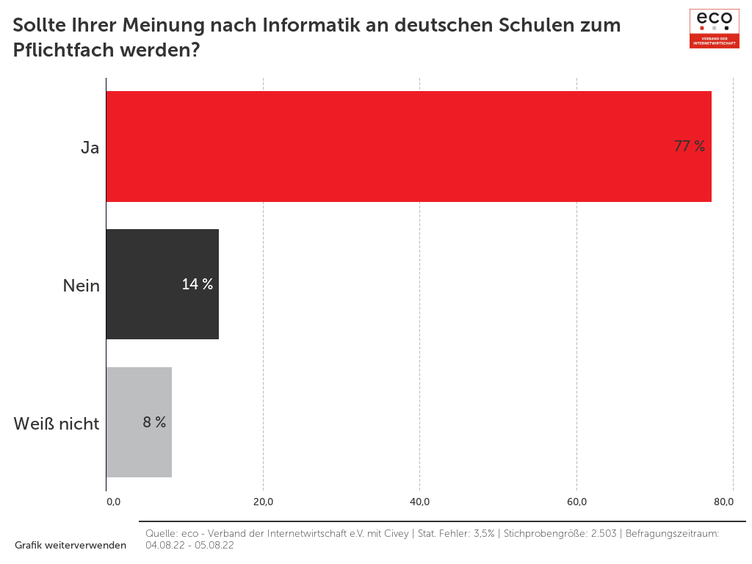 Graphics: eco – The Association of the Internet Industry

For the majority of Germans, it is too late

Graphics: eco – The Association of the Internet Industry

“Digitalisation will continue to shape and above all change our society and economy in the coming decades. Digital competences lead to innovation strength and are therefore essential success factors for the professional success of each individual, as well as for digital sovereignty and the competitiveness of the digital and business location Germany”, says eco-managing director Alexander Rabe. Access to digital education at all levels in the education system and in all phases of the education process is therefore a fundamental prerequisite for a successful digitization of the economy as a whole, continued Rabe. “The only way we can counter the current shortage of skilled labor, which many of our member companies and user industries in the ICT sector complain about, is to get school children excited about the subject of digitization in an age-appropriate way as early as possible. and to teach the fundamentals of digitization.”

Digital education as a political task

Especially during the shutdowns as a result of the Covid 19 pandemic, it became clear that the German education system is at a disadvantage when it comes to digitization. The digital political opinion barometer collected by Eco together with Civey since the government was formed in April 2022 shows that the topic of digital education is also currently high on the political agenda of the federal government for many Germans. About 27.6 percent of respondents currently consider digital education to be one of the most pressing policy issues facing the federal government.

The values ​​are very high in southern Germany: in Bavaria (25.3 percent) and in Baden-Württemberg (28 percent), around a quarter of respondents believe that digital education in the state must be improved.