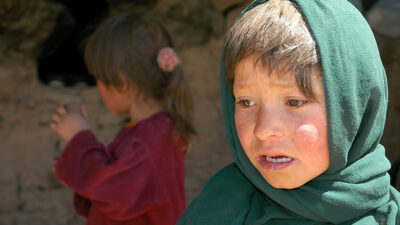 In Afghanistan, the population has suffered from hunger since the withdrawal of Western troops. International sanctions hit the population hardest. Children suffer the most, as a report from Save the Children shows. According to this, every second girl does not go to school.

A year after the Taliban took power, many Afghan children are suffering from hunger, depression and anxiety, according to a study. Girls in particular are having a bad time in the country on the Hindu Kush, which is also suffering from a serious economic crisis, “Save the Children” announced on Wednesday in Berlin. The Afghan director of the aid agency, Chris Nyamandi, spoke of a “children’s rights disaster” and called for more humanitarian aid to the country. In addition, the international community must find a way to support the economy and stimulate the banking system.

According to the organization, the report, published Wednesday, included data from children and caregivers from about 1,450 Afghan households. According to this, 97 percent of the families surveyed in May and June declared that they could not feed their children adequately. Girls eat even less than boys. Also 26 percent of the girls and 16 percent of the boys showed signs of depression. Many young people also suffered from anxiety.

Almost every second girl does not go to school

The study shows that the Taliban’s ideology particularly affects girls. More than 45 percent of the girls surveyed do not go to school. Many girls are prevented from going to school because of the ban on high school, which the new rulers have introduced, but also for financial reasons. A fifth of the boys surveyed said they did not go to school.

As during the first Taliban rule between 1996 and 2001, the Taliban banned women from much of public life. Junior high schools for girls are mostly closed. A serious economic crisis is also creating problems for the Afghans.

Human rights activists are calling for the sanctions to be eased

The distress is exacerbated by international sanctions. Among other things, several governments, including the United States, and the World Bank froze the assets of the Afghan central bank after the Taliban seized power a year ago. This is why Human Rights Watch has called for the easing of restrictions on the banking sector in Afghanistan. This is the only way to combat the humanitarian crisis effectively, the Washington-based human rights organization said.

There is an urgent need for an agreement to allow the people of Afghanistan economic activity. “The growing hunger and health crisis is acute and stems from a banking crisis,” said Human Rights Watch Asia researcher John Sifton. The country is currently experiencing a serious liquidity crisis and a shortage of banknotes, criticized the human rights activists. Companies, humanitarian organizations and private banks can therefore only operate to a very limited extent. At the same time, millions of people have lost their jobs because foreign donors have significantly reduced their funding for education, health and other important areas.

Every second person suffers from hunger

Almost half of the population suffers from hunger in Afghanistan. Nearly 90 percent of all Afghans have not had enough to eat in some way since last August, Human Rights Watch said. According to the human rights organization, the problem is less a lack of food than economic difficulties. Food importers could not pay for the goods, and people in exile could barely give their relatives money.

“Millions of starving Afghans live in the horrible reality of seeing food in the market and not being able to buy it,” Sifton said. At the same time, inflation and rising prices have caused the price of food and fertilizer to rise dramatically. The Taliban have ruled the country since Western troops left the country unprepared and hastily, effectively ceding power to the Taliban. (epd/me)