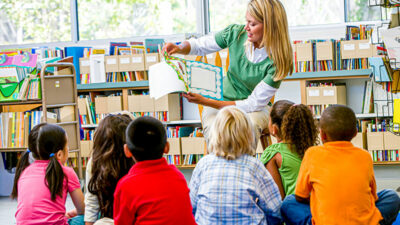 Daycare centers fear they will not be able to continue supporting children who speak little or no German because a federal funding program is about to expire. The money has so far been used to pay for additional specialists.

The unions accuse the federal government of letting the successful funding program expire, contrary to their announcement. The parties SPD, Grønne and FDP had declared in the coalition agreement that they wanted to “further develop and consolidate the language daycare program”.

In particular, children from families with a history of migration would be disadvantaged in the future and disadvantaged in their educational opportunities, criticize the associations. The federal head of the Association of Catholic Daycare Centers for Children (KTK), Paul Nowicki, told the Evangelical Press Service that the integration of Ukrainian children poses additional challenges for the facilities. There will also be an urgent need for additional specialists for language support in the future.

According to the Federal Ministry of Family Affairs, the federal government has recently provided around 200 million euros per year to language daycare centers. A spokeswoman for the Association of Cities and Municipalities told “Evangelical Press Service” that the municipalities expected the federal government to provide “permanent funding” for the program instead of ending it, which had been very well received in practice. In their open letter, the associations also appeal to the federal states to continue the program.

Ministry of Family Affairs: It is up to the states

A spokeswoman for the federal Minister for Family Affairs Lisa Paus (Greens) explained that it is now up to the federal states to continue funding language support. Language teaching is not a niche subject, but belongs at the center of quality development. In the future Kita Quality Act, the federal government will therefore legally anchor language support and strengthen it financially, she explained. The language day care institution training is, on the other hand, a temporary model project to draw attention to the importance of language promotion.

For the years 2023 and 2024, the federal government has earmarked two billion euros for the promotion of pre-school education and quality development in daycare centers. The framework for this must be provided by the Kita quality act, which is being drafted and will replace the Good Kita act. Within the framework of this law, the federal government wants to prioritize language teaching – but the federal states make decisions about how the funds are used.

No more funding for the language daycare program

For eleven years now, the federal government has supported language education for kindergarten children who do not speak German as their first language with model programs. In mid-July, the Federal Ministry of Family Affairs informed the daycare workers that the budget proposal for 2023 no longer provided funds for the continuation of the language daycare program and that the language support would be handed over to the federal states as a permanent task.

According to the ministry, the federal funds allocated so far have been sufficient for 7,500 part-time positions for additional language teaching specialists in 6,900 day care centers, reaching about half a million children. Every eighth daycare center is now a daycare center with language support, it said. (epd/me)