Dusseldorf A look at the news and Dax developments over the past week shows a discrepancy. There were few really positive surprises. Just a bunch of reports that weren’t as bad as feared.

The companies’ quarterly figures were not as weak as expected. And the US Federal Reserve’s (Fed) interest rate decision remained in line with forecasts with a 0.75 percentage point move. Nevertheless, the leading German index Dax rose by 1.7 percent last week, the American index Dow Jones even by 2.8 percent.

Long-term investors, who usually start building new positions after good news, were probably not responsible for this development. Apparently, sellers who didn’t part with their stocks further because there was no new bad news in the past week were responsible. That alone was enough for a positive stock market development.

A week ago, sentiment expert Stephan Heibel stated that the leading German index was in the first phase of the relief rally. It is still unknown whether the further development will be sufficient for the stock markets to switch back to a violent rally mode. The participants in the Handelsblatt survey Dax-Sentiment at least have their doubts. This can be seen, for example, from data from the Stuttgart stock exchange. Because there, investors increasingly protect themselves against falling prices.

Find the best jobs now and
get notified by e-mail.

For the sentiment expert Heibel, on the other hand, it is not the first time “that the bottom of a correction occurs because there are no longer any sellers”.

And it wouldn’t be out of character if equity markets continued to stage a gradual recovery from then on, punctuated by respites as issues like the Ukraine war, inflation and supply chain disruptions resurface. However, there may be successive solutions to this negative development. Then the stock markets should be significantly higher than today. 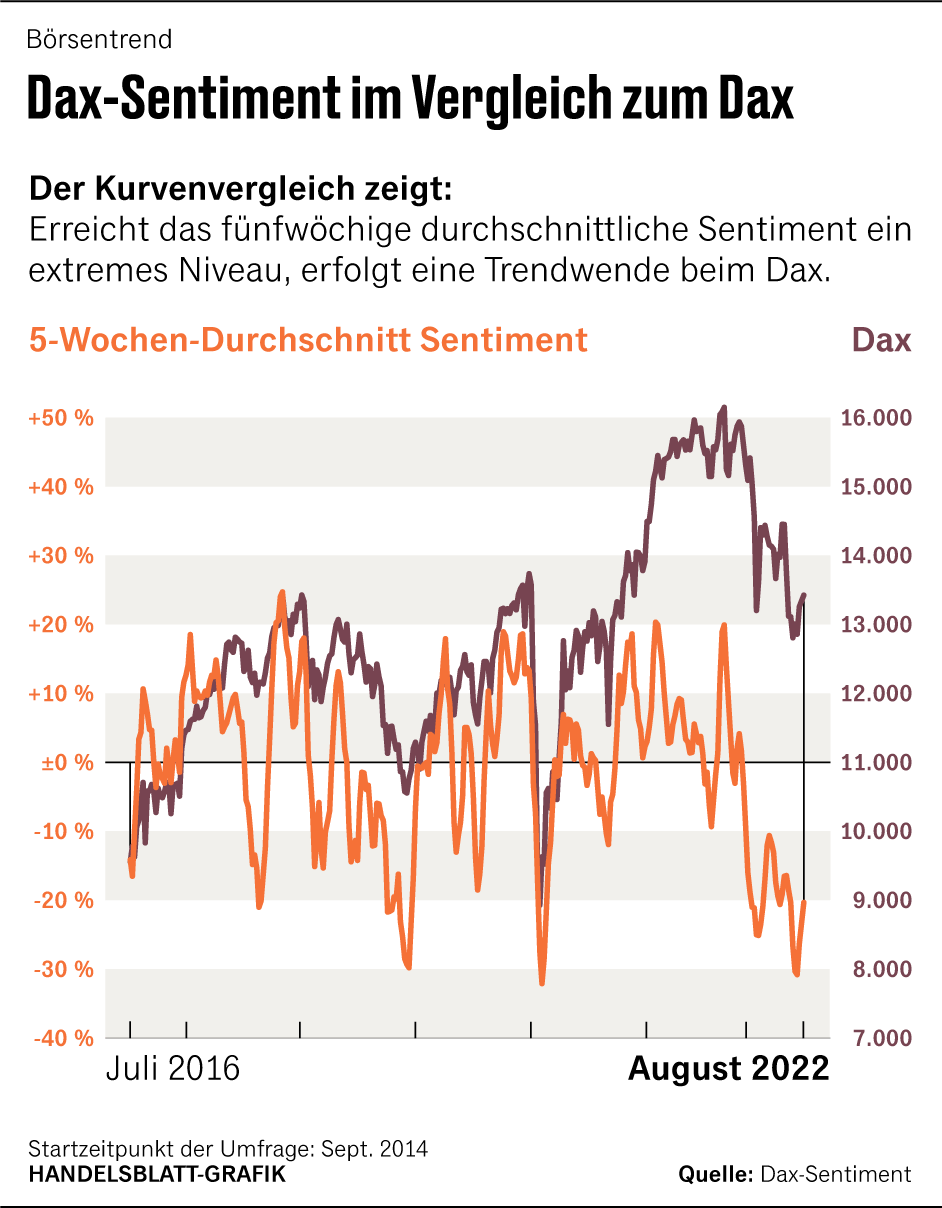 However, according to Heibel, the difference between Germany and the US remains. While in the Federal Republic of Germany a cold winter is coming due to a lack of gas and industries may have to limit their production, joy over already subdued inflation dominates in the United States.

The Ukraine war is far away for the Americans, supply chain problems are being solved there. And energy shortages are not unknown in the United States. “On the contrary, there is still too much gas there because the biggest gas terminal still needs to be repaired after an incident in June,” says the sentiment expert.

The gas, which cannot be liquefied, must now be consumed on the domestic market at dumped prices.

Investors are less reassured by the reports than by developments on the stock market. Sentiment on shares turned positive for the first time since the beginning of the year. The value is plus 0.1. The mood is now neutral again for the first time.

The uncertainty is also disappearing, although with a value of minus 1.0 it has not yet completely disappeared. The volatile market events of the past few months have left too deep a mark for one to present himself with complacency after two positive weeks on the stock market.

The expectation for the Dax development in three months remains moderately positive with a value of plus 0.7. The bulls dominate, but it’s not really optimism. The willingness to invest has jumped to plus 2.9 – so investors see further opportunities in the coming weeks.

Euwax sentiment on the Stuttgart stock exchange, where private investors trade, has fallen further and is now trading at a value of minus 6.5. Again, significantly more put leverage products are bought as protection against falling prices than call derivatives on the Dax. It is a sign that private investors do not really trust the price increase. There is no conviction that the German stock market has already bottomed out.

On the other hand, the put/call ratio on Frankfurt derivatives exchange Eurex, where institutional investors trade, shows a fairly neutral positioning of 1.4.

In the US, the put/call ratio on the Chicago futures exchange CBOE falls to 0.95. American professionals are increasingly dependent on further rising rates. While fears of energy problems in the coming winter continue to weigh on the mood in Germany, the US appears to be slowly accepting the war in Ukraine as a given.

US fund investors slightly increased their investment ratio by two percentage points to 47 percent. This means that the rate remains low because a level of 70 percent or more is considered normal.

The bull/bear ratio for US retail investors has risen to minus twelve, remains pessimistic. The increase in mood is solely due to the decreasing number of bears. The neutral camp has grown by four percentage points to 32 percent.

The “Fear and Greed Indicator” for the US markets, calculated from technical market data, shows very little fear at 42 percent. Other short-term technical indicators signal that a respite is more likely in the near term.

There are two assumptions behind studies like the Dax sentiment with more than 7,000 participants: If many investors are optimistic, they have already invested. Then there are only a few left who could still buy and thus drive prices up. Conversely, if the investors are pessimistic, the majority of them have not invested. Then only a few can sell and thus push the lanes down.

Would you like to participate in the survey? So let yourself be automatically informed about the start of the sentiment survey and sign up for the Dax sentiment newsletter. The survey starts every Friday morning and ends on Sunday afternoon.

More: Investors make these ten mistakes from the point of view of stock market psychologists