If you underestimate this DAC because of its size, it’s your own fault! iFi ZEN One Signature is very impressive in its price range and at the same time looks really smart!

iFi audio stands out from the crowd of hi-fi electronics manufacturers. Unlike many manufacturers, the British brand focuses not on size, but on understatement. iFi audio builds miniature hi-fi units. With a special eye for head-fi, i.e. enjoying music over headphones, iFi designs audio electronics that can be placed on any desk. Particular attention is paid to the D/A converter. The iFi ZEN One Signature is one of them, and at just under 400 euros, it is in the middle of what iFi audio offers. It has no room for headphones, but it can receive music via USB or Bluetooth and pass it on to your amplifier as an analogue signal. We tested how well this succeeds in our listening studio.

iFi ZEN One Signature in detail

The iFi ZEN One Signature packs a whole lot of the latest technology into a footprint of just 158 ​​x 100 millimeters. Without its Bluetooth antenna, it is also only three and a half centimeters tall. With these dimensions, it really fits on any desk and even in the tightest hi-fi cabinet. The first thing you notice on the front are two round windows. The one in the center is decorated with the iFi logo, the one on the right is blank, but is crowned with the inscription kHz. Both light up during operation and provide information about the audio format (large window) and its resolution (small window).

You can buy the iFi ZEN One Signature directly from Amazon: 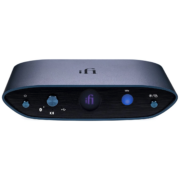 The standby button and source selection are on the left edge of the front. You can choose between Bluetooth, S/PDIF and USB. Another button on the right end of the front dims the two screens and starts pairing mode if you hold it down. The source selection is thus not automatically linked to the pairing. A smart move as it saves you having to rescan for your Bluetooth radio every time you change sources.

The back is crammed with all the important connections. You can send your music signal to the device via an optical, coaxial or USB-B cable. This even works wirelessly via Bluetooth 5.1 and thanks to the Bluetooth codec aptX – in all its different variants – and LDAC also in excellent quality. Of course, the iFi ZEN One Signature also supports the usual suspects SBC and AAC. So you can pair any mobile phone with the DAC.

As a special feature, you can also use the coaxial input as an output. If you select a source other than S/PDIF, it extracts the signal digitally. An exciting option, although you’ll probably end up using the pair of RCA jacks most of the time. You can use them to route the analog signal to your amplifier or active speakers. In addition, the iFi ZEN One Signature also offers you a symmetrical output in the form of a plug. So if you want even more out of your music, this output is your choice.

iFi audio prefers to use chips from Burr-Brown in its products. Same here. Although we are far from giving chips an audio grade, it is still crucial that the D/A conversion remains “bit-perfect”, that is, the original signal is not affected by the conversion. This is exactly what iFi audio says about the ZEN One Signature.

With its help, you should be able to convert music files up to a maximum resolution of 384 kHz with a bit depth of 32 bits to analog voltage. DSD is supported, as is the MQA format used by streaming service Tidal. The iFi ZEN One Signature can not only reproduce this, but also decode it, thus getting the full resolution out of your subscription. You get the best high resolution via the USB interface. The optical and coaxial inputs are each limited to a resolution of 192 kHz.

Unlike the iFi Zen DAC V2, which we also tested, the ZEN One Signature has no headphone outputs and no volume control. The jack on the back always emits full volume and is therefore not suitable for headphones.

The D/A converter gets its power from an external 5V power supply. Although the USB-B interface could theoretically also be used as a power source, the ZEN One Signature does not support this function. Unlike the Zen DAC V2, you are dependent on the power supply.

Easy to use on any source

To use the iFi ZEN One Signature D/A converter, simply connect it to your amplifier with a cable and supply it with power. You can already use it as a high-quality Bluetooth receiver. Operation is also very simple via the other connections. Computers running iOS recognize the little box immediately, so you can select it as the output device in the audio settings. For Windows and Linux, you must first install a driver. iFi audio offers this for free on its website. Finally, all you have to do is select the source and the ZEN One Signature will send your music to your hi-fi system.

iFi ZEN One Signature in the sound test: the next level

To find out what difference the iFi audio D/A converter makes to the sound of our hi-fi system, we connected it to our Rotel RA-1592MKII with a cinch cable. The bolide amplifier itself has an excellent converter and has already proven itself in many tests as a powerful but neutral companion. But as soon as we connected our Roon software laptop to the ZEN One Signature, our mouths dropped.

To make one thing clear: the differences that can be heard between different D/A converters are much smaller than the differences between speakers or amplifiers. So if you want to improve the sound of your hi-fi system, you should always start with these components first and then move on to finer details such as D/A converters or sources. Nevertheless, the differences in our tests were clearly noticeable.

The improvement over Rotel’s converter was noticed in the first few seconds by Roger Waters Perfect Sense, Pt.1 clear. The thunderstorm that had previously been looming over you now seemed to unleash its full force directly upon you. The sound effects seemed to come further out of the Audio Physic Midex and at the same time came from much higher up. The voice wandering around you could also be accurately located. Roger Waters then appears in front of you, razor sharp, large and detached from the background. Where the cheaper iFi ZEN DAC V2 mercifully hid a few years of its voice, now you could hear every harsh undertone.

Classical music is also noticeably revived under the iFi ZEN One Signature’s auspices. The Bremen ensemble Los Temperamentos has reinterpreted baroque music from Latin America on their album Entre Dos Tiempos. The result is bursting with life and dynamics even without an external DAC. With him, however, it becomes clear for the first time that the harpsichord is also tinkling between violins, drums and clapping hands. All the instruments breathe a sigh of relief, the space they are placed in takes shape and size, everything seems wider, more airy.

The fact that the DAC never loses control is impressively demonstrated by Kae Tempest’s singing I saw light. The effects moving from one side to the other require a lot of control from any hi-fi system. Here it is important to precisely control quick impulses that immediately disappear in order to make room for the next note. Rotel already did this brilliantly, but the external DAC from iFi audio gives every beat even more punch.

Design: Cool and well thought out

Like the iFi Zen DAC V2, the iFi ZEN One Signature can shine with its absolutely smart design. The metal housing has a clean finish and the bluish surface gives the DAC a fresh character. The brightness of the two round indicators can be dimmed or switched off completely. So the colorful lights don’t bother you when you don’t need them. On the other hand, the division into format and resolution is extremely practical, as you can assess at a glance what kind of music format is being played in which resolution.

iFi audio proves once again that big sound doesn’t need a big house. In the ZEN One Signature, the best components work hand in hand and produce a brilliant sound that even brings the 2,800 euro Rotel RA-1592MKII DAC to its knees. For just under 350 euros, you get crystal clear sound that expands your sound image considerably in all directions. To notice clear differences, you have to dig much deeper in your pocket. In addition, there is the extensive range of sources including Bluetooth. The iFi ZEN One Signature is therefore an urgent recommendation for anyone who wants to do something good for their otherwise well-equipped hi-fi system.

Click here for the iFi ZEN One Signature offer:

What do you think of the iFi ZEN One Signature? What value do you place on D/A converters? Tell us your opinion in the comments!