At Rapido, the furniture is always central. The 2023 season is no exception. For the first time, a new plant is moving in, which can hardly be surpassed in its reduction.

The living world called Luceo is reminiscent of Scandinavian design not only because of its minimalist design and clear lines, but also because of the very light wooden interior. And one of the high class variety.

The matte decorations make the wood look tangible. Solid wood is even used on the table edge of the 80dF series, but due to its black color it is only recognizable at a second glance. Black also creates a contrast on the kitchen wall. On the other hand, the fact that no expense was spared on sophisticated lighting effects can be considered typical of Rapido.

Something else is not unusual at Rapido, but has otherwise become rare: with the exception of the Distinction series, buyers can freely choose between the new Luceo furniture and the classic Nacarat furniture, at no additional cost.

Integrated 8F and 80dF get a facelift 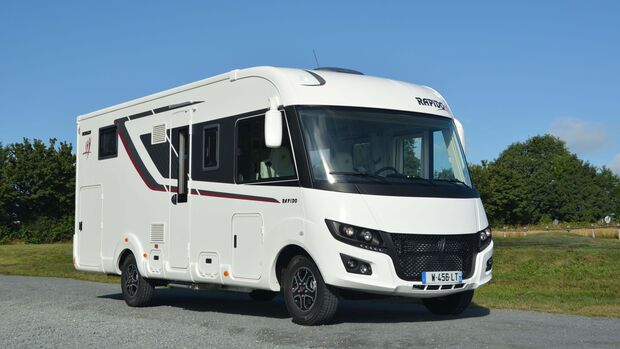 There are also small revisions to the integrated ones. Here is 8086dF.

In any case, Luceo’s life world fits well with the renewed integrated models in the 8F and 80dF series. Matte black on the outside also forms a strong contrast to the white walls. A little trick on the radiator grill creates a more dominant appearance here.

Besides a small reduction in the offer, there is only a small change to report in the layout of the integrated. The newly introduced rear seating group model 854 F now has a true U-shaped sofa, an electric folding bed and a shelf behind the front passenger seat. Here we presented the Rapido 854 F. 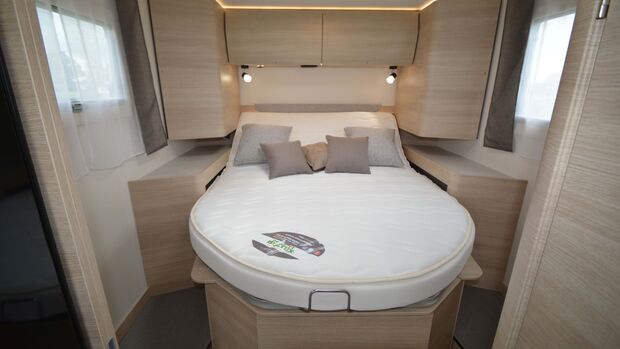 More freedom of movement in the semi-integrated Rapido C50.

The semi-integrated ones continue to develop in a similar way. Here too, Rapido limits itself to a small optimization. The C50, Rapido’s most compact queen-size bed model, has an adjustable slatted frame. During the day, you can move the bed slightly towards the back wall, whereby the headboard rises. It doesn’t sound spectacular, but it is a decisive plus in everyday freedom of movement, especially in the C50. We have already tested the old version of the C50: Click here for the full article.

Other changes can be seen on the radiator grill and in the cab: the C-series, like the 6F-series and the vans, moves from the Fiat Ducato to the Peugeot Boxer. Only those who order an automatic will continue to get the Fiat.

The Rapido traditions include variants with extended equipment that are not intended as a special model. In model year 2023, they are again called Ultimate Line. Select floor plans are only available as Ultimate Line. The package includes unusual technology such as a heated table base for the integrated models and a built-in vacuum cleaner. Other details relate to the optics. This goes from the exterior decor to the cushions to the dark and backlit shower column that shows stronger contrasts with the matte black floor grate.

The Rapido caravans also benefit from the new bright furniture. The campers will be available in 2023 with a new base vehicle: the Peugeot Boxer.

If RV manufacturers don’t bring the spectacular news for once, it doesn’t have to be a bad thing. Sometimes it is good to focus on existing models. For example, the semi-integrated C50 benefits from a new, sliding slatted frame that provides more freedom of movement. Light furniture also always creates an airy feeling in the room.