With the next-generation consoles Playstation 5 and Xbox Series X, console gamers can now experience what PC gamers have enjoyed for many years: Games with high frame rates, i.e. 120 Hz, at the same time with high resolution, i.e. 4K/UHD. The screen manufacturers have also thought of the console players, as not everyone plays on the television. Most, but not all, 4K 120Hz or higher displays now have HDMI 2.1, which is necessary to run 120Hz at 4K/UHD resolution. Sony’s Inzone is a new brand with a focus on gaming peripherals. One of the first Inzone products to hit shelves is the outrageously expensive Sony Inzone M9, a 27-inch 144Hz gaming monitor aiming for a foothold in the high-end.

Basically, it impresses with Full Array Local Dimming (FALD) for better contrast display, highlights and deeper black tones. It also supports DisplayHDR 600 and everything Playstation 5 has to offer. So in addition to HDR screen also Freesync. But more on that later. It should probably be suitable for anyone who wants to play a PS5 on their desktop, with the same screen, but wants to operate a gaming PC. But he does not manage this balancing act, as was already teased at the beginning. But one after the other.

Visually, the Inzone M9 pays tribute to the design of the Playstation 5, including the white back panel with black accents. The panel sits on a sliding rail in the middle that lets you adjust it vertically to change the height, while two smaller legs support the main stand, just like a tripod. A hinge in the center of the screen keeps the screen and stand connected.

In addition to the unique stand, a small insert hides the screen’s speakers and gives the screen a hint of RGB lighting, which many gamers crave. The lighting is limited to the back of the screen and is subtle enough not to be annoying.

At the bottom right is an OSD control stick and the power button. Hidden in the OSD are the usual gaming support tools, including a frame rate counter and reticle, as well as an FPS gaming picture mode – this optimizes brightness and contrast for first-person shooters. One can also access these options through the Inzone app, although the app doesn’t offer anything extra beyond easier OSD control on PC.


In the middle of the back of the screen are the ports, which include a DisplayPort connector, a headphone jack, three USB-A ports, a USB Type-B upstream port, two HDMI 2.1 and a USB Type-C connector. The HDMI 2.1 connection is important to achieve higher frame rates above 60Hz when connected to a Playstation 5.

The screen is also surprisingly light, weighing only 7.7 kg with the stand and 5.7 kg without. This makes it lighter than many other 27-inch monitors. It measures approximately 62 x 48 x 25 cm – with the stand, which can be removed to mount the screen on a VESA mount if desired. The monitor itself has a small stand, whose ergonomic features were sacrificed for the design. It therefore has no pivot function, and the height can only be adjusted by approximately seven centimeters. It also cannot be rotated around its own axis (rotate function).

In addition to the measurements with a PC, we also connected the Inzone M9 to a Playstation 5 to experience the exclusive PS5 functions. This includes Auto HDR Tone Mapping, which automatically detects your PS5 on launch and optimizes the HDR settings. There’s also Auto Genre Picture Mode, which automatically switches the screen to Game Mode when playing games (to minimize input lag), or to Cinema Mode when watching movies from a streaming service or from a Blu-ray disc.

As expected, everything works as it should. It may be small things, but having less menu to navigate is always a welcome addition. The power button turns off the console even if you turn off the screen. Nevertheless, these gimmicks aren’t necessarily a selling point for console gamers.

However, we were disappointed with the integrated speakers in the Inzone M9. The sound, while loud, sounds hollow, probably partly because it comes out of the back of the screen and partly because built-in speakers rarely do better than mediocre ones. The basses were also almost inaudible. Sony might have done better to place the speakers in a more favorable position. In the same price range, there are already good quality televisions suitable for gaming, which almost always offer better sound than almost any monitor. We would have expected more from Sony, especially at this high price, which is still in the four digits at market launch. 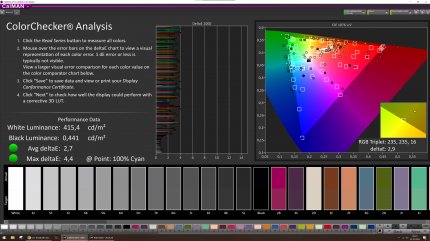 
Anyone looking for a 4K/UHD screen of this size from 144 Hz will only find IPS panels. There are already more than 20 screen models with these characteristics in the price comparison, but only a few different panels. Several 28-inch models make the price entry and cost around 500 to 600 euros depending on model and equipment. The main difference to screens almost twice as expensive as the Inzone M9 is the 8-bit color depth and the lack of HDR (or only HDR 400, which is not HDR).

In short: If you primarily play games and do not make any (HDR) demands, the 28 models have a significantly better price-performance ratio. If you see yourself as a color sommelier and make higher demands on the screen, you will have to dig disproportionately deeper in your pocket. Would you like to drink a well-mixed whiskey cola or would you prefer to go to a whiskey tasting? Hope you understand my point.

The Sony monitor’s 10-bit color depth results in a correspondingly high coverage of color space, which also meets the professional requirements needed for video or image processing. For the gamer himself, these good color properties are almost “too much of a good thing”, since the sRGB color space is absorbed by a large margin. He has no more in SDR gaming, just as little from the good color fidelity. In our measurements, the monitor fulfills all IPS clichés – the positive as well as the negative. It has strong viewing angles and colors, is quick to respond (more on that later), but also only has a mediocre (SDR) contrast that only comes close to 1,000:1. With over 400 cd/m², it is more than sufficiently bright and can also be easily dimmed down to dark rooms.

Next page
Next page