June 14, 2022 – In 134 German regions, the purchase price of properties is already high relative to local rents. It is hardly worth buying here anymore. According to Boligatlas 2022, investments only make sense where prices will rise in the coming years.

The opportunities for potential property buyers are becoming fewer. The reason: Purchase prices go through the roof, especially in the big German cities and in popular holiday areas. The distance to the regional rents is getting bigger.

Postbank – a branch of Deutsche Bank AG – came to these conclusions in its “Housing Atlas 2022”.

The evaluation is an annual, multi-part series of studies examining the German real estate market from various aspects regionally down to the district level. The current evaluation has been prepared by the Hamburgische Weltwirtschaftsinstitut gGmbH (HWWI) for 401 independent cities and districts on behalf of the financial institution.

Information about the study

When analyzing the investment opportunities, the experts compare the price level of the offered properties in relation to the regional rents.

The authors of the Housing Atlas use the so-called multiplier as a measuring instrument to calculate the ratio between rents and purchase prices of real estate. It shows how many annual rents it costs on average to buy a condominium in the same region or city. Prices and rents from 2021 were included in the calculations.

For comparison: in 2020, buyers would have to pay an average of 25.7 annual net rent for a similar condominium in the portfolio (VersicherungsJournal 20 May 2021). In 2019, there were still 24 annual rents (28.8.2020). With a maximum multiplier of 25.0, experts are currently talking about a relatively moderate purchase price level.

In holiday regions and big cities, it is no longer worth buying

According to the housing atlas, North Frisia has the highest multiplier of 82.3. The districts of Rostock, Vorpommern-Rügen and Nordvest-Mecklenburg as well as the districts of Aurich, Wittmund and Leer are also in the top ten. The Bavarian districts of Miesbach (51.7) and Garmisch-Partenkirchen (45.1) also belong to the top group.

In larger German cities, it can hardly pay to buy anymore. Hamburg currently has the highest multiplier (43.2). Munich, Berlin and Potsdam are also more than 40 annual net rents to be paid for a condominium of the same size.

For 134 regions in Germany, multipliers of over 30 were calculated in 2021, thus showing a very high price level. These include some rural and urban areas for which the housing atlas predicts a negative price trend up to 2035.

In many regions, the boom has already reached its peak 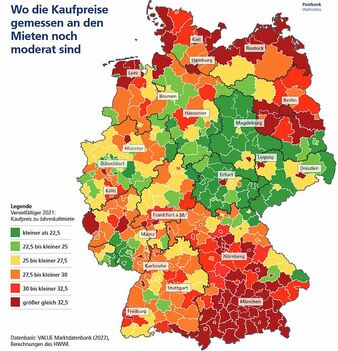 In these regions, buyers would buy condominiums at a very high price and will probably have to accept value losses in the future. “The real estate boom has already reached or passed its peak here,” says Postbank.

Example Rostock: Here, purchase prices in 2021 were already around 4,535 euros per square meter (multiplier of 56). At the same time, a price development of minus 0.84 per cent is expected for the future, according to Postbank experts.

Similar forecasts also apply to Cochem-Zell in Rhineland-Palatinate and the independent cities of Amberg, Schweinsfurt (both Bavaria) and Schwerin in Mecklenburg-Western Pomerania.

“A high multiplier entails the risk that future price increases are already included in the current valuations, which may lead to a loss of earnings through resale. The higher the expected price development, the greater the chance of being able to make a profit on the later sale of the apartment, ”warns Eva Grunwald, head of real estate at Postbank and Deutsche Bank.

The study authors for the housing atlas see six districts in Bavaria, Lower Saxony and Saarland as top investment opportunities in Germany. These include, for example, the Saarbrücken Regional Association, Straubing-Bogen (Bavaria) or the county of Bentheim in Lower Saxony.

According to the evaluation, six rural areas and one district offer positive value increases with a slightly higher multiplier. However, the properties are only in Lower Saxony or Baden-Württemberg such as Lörrach, Wolfsburg or Osnabrück.

According to the specialists at Immowelt GmbH, the end of the boom in the real estate market is near. For ten of the 14 major cities in Germany with more than 500,000 inhabitants, they expect that purchase prices will fall or at best stagnate. The curve only points upwards in Hanover, Bremen, Hamburg and Munich (25 May 2022).

Immowelt AG investigated at the beginning of the year how the prices of condominiums in the metropolises develop compared to houses on the outskirts. The accommodation in the commuter belt will therefore be more affordable for those interested than a family-friendly property in the city (18 February 2022).

Condominiums, on the other hand, showed significant increases. The average price increase in 2021 compared to 2020 was as much as 14.2 percent. In 98 percent of all German boroughs and boroughs, second-hand condominiums have become more expensive (March 28, 2022). And this despite the fact that interest rates on home loans have been rising since the beginning of the year. They make the burden on buyers significantly more expensive (April 8, 2022). It shows Immowelt’s calculations.