The first series of NFTs will be titled “JUU-NIN-TO-IRO” and will be created by 10 top illustrators based on the theme “Traditional colors in Japan”.

Each version includes a 4-character kanji combination name and themes such as kanji characters, Japanese colors, Japanese painting, and kimono. These projects aim to share Japan’s distinctive culture with the world.

NFT transaction values ​​have risen rapidly in 2021, and the selling price of digital artworks is approaching the value of physical art.

With this in mind, the JINP project was launched with the goal of becoming a brand that attracts art lovers by sharing “Japanese traditional and modern culture” with the world. Our vision is to mix the traditional with the modern culture mix and preserve them for the future using blockchain technology.

Each of the JINP publications will feature a 4-character composite kanji and a series of works based on this theme.

In the second phase, we plan to develop an “ON-KO-CHI-SHIN” NFT artwork based on a traditional Japanese work by the world-renowned photographer “RK”.

In the future, JINP plans to develop NFTs that express the combination of “traditional and modern Japanese culture” using 4-character kanji combinations. 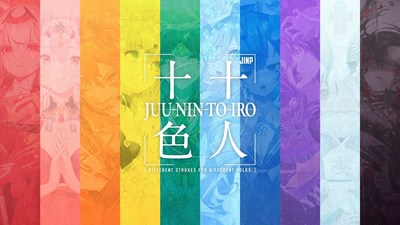 “JUU-NIN-TO-IRO” means “everyone has their own ideas and tastes,” or more literally, “ten people, ten different ideas or tastes.”

Inspired by the meaning of this phrase, JINP will this time develop an NFT series with the theme “Washoku”, which represents the traditional color in Japan.

Each “Washoku” color has a unique name that reflects a season or a kind of mood or taste Japan States. For this project, each illustrator will be responsible for one color. A total of 10 illustrators will create a work of art.

Period: The auction of the first series is scheduled to start on June 20, 2022
Marketplace platform: The Foundation
Website: https://juu-nin-to-iro.jinp.art

The NFT artwork is produced by the photographer RK with the theme traditional Japanese art.

* Details will be off end of June be available.