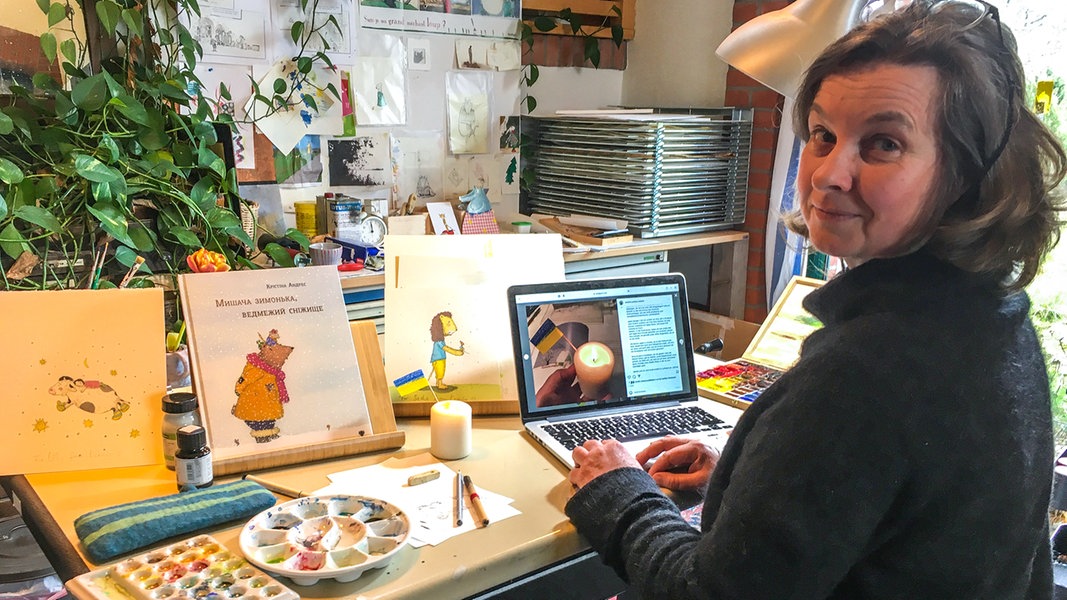 by Heike Mayer and Siv Stippekohl

Has held since the beginning of the war Kristina Andres contacted three women from the Krokus publishing house in Kharkiv. The artist, illustrator and children’s book author from Dobbin bei Dobbertin in Mecklenburg publishes what her Ukrainian publishers are going through. She draws comforting animal wishes and organizes the rescue of Ukrainian children’s literature from the war.

“Making books means sharing stories with each other,” wrote artist and children’s book author Kristina Andres on Instagram on February 24, 2022. In addition, she posts two photos of the same cover of her picture book “Mice Winter, Bear Snow”, one of the Austrian edition Hippo, next to the Ukrainian licensed edition from Krokusverlag in Kharkiv. “It always feels like a little miracle to me when one of my works pops up in a foreign language. A gift. A sign of peace.”

On this day, the story of Kristina Andres and her support for three women from the Ukrainian publishing house Krokus begins. “That day, there was nothing to say about how bad it would all get,” Andres says. On the first day of the war, she heard in the news that Kharkiv was under fire.

War instead of children’s book fair

She writes to Nargis and Anna and wants to know if they are okay. The two Ukrainians fulfilled their dream in 2019 and after many years of working at large publishers founded their own independent publishing house for European and Ukrainian children’s literature. Irina also worked at Krokus publishing house. Kristina has been in contact with all three women several times a day since the beginning of the war. The three women actually planned their first trip to the International Children’s Book Fair in Bologna at the end of March. Another licensing agreement for a work by Kristina Andres was also to be negotiated in Italy. But then the war began. Not a single Ukrainian publisher was present in Bologna this year.

For the first few days, Anna sends pictures and asks Kristina Andres to publish them on her behalf. She hesitates. May, should she show these pictures? She does not think for ten minutes and obeys the request. One of the photos shows a shot car belonging to Anna’s friends. Many of the photographs from Kharkiv are dark, the high-rise buildings have no basements. A photo shows Nargis’ 12-year-old daughter sleeping in the bathtub – for protection in the event of a bomb attack. Kristina Andres does not publish this picture. It remains private. Later, she will remove the pictures of the war so no children can see them there.

Escape from Kharkiv by train

The publisher Nargis speaks only Ukrainian and Russian. Kristina Andres therefore communicates with her daughter Liljya in English, talks to her. She advises to leave the city. “We have no car, we can not leave,” the child replies. But just a day later, Nargis and her daughter are already pushing into a train. She sends a picture of Lilya at the train station to Kristina Andres in Mecklenburg in her quiet studio on her mobile phone. “It was a picture we all know: many, many people, gathered, many suitcases, and I thought: Oh honey!”

Drawing of an elephant girl for Lilya

She texted Lilya and asked if she had a favorite animal and if she should draw it for her. “And she wrote back: Draw me an elephant!” Kristina Andres draws. In the evening, she posts a picture of an elephant girl online, wearing a skirt, flying, spraying a rainbow with her trunk. There are many wishes that the artist fulfills for the children. She draws a lizard for Timothy, a wolf for Nikita, a penguin for Polina, a cow for Lily.

“I will draw these animals as long as it takes “

The artist provides the pictures with a short greeting: “Here is a cow for you. I hope you like it. Love and hugs, Kristina”. Love and hugs are important to her, says Kristina Andres, “because I think all children need that now.” To her followers, she writes briefly what she knows about the children who would like an animal drawing. For example, Lily is 12 years old. When she was two years old, she got a little plush cow. She took them with her when she fled, that was the most important thing for her. In the picture of Kristina Andres, Lily sleeps peacefully, smiling and snuggles against the back of a huge, fat cow wearing yellow and blue slippers.

Ukrainian flag part of all photos

The colors of the Ukrainian flag appear discreetly in all Andres’ animal wishes. “It was important to me from the beginning because it’s just about this: this Ukrainian culture should be eradicated. It’s so clear. It’s just a small sign, but I just want these children to know that they are Ukrainian “Children are thought to know who they are and where they belong,” Andres emphasizes.

In addition to the animal wish pictures, the illustrator and author documents the three women’s path from the Krokus publishing house in Kharkiv in short, concise texts, “come what may. I never know in the morning what message I find on my cell phone, and I am always happy when it is there, says: We are okay. “

“Every morning Irina sends a Whatsapp message from near Kharkiv: We are ok. Which just means no one is hurt. Safe house […] When we wrote the other day, Irina had to interrupt because there was an explosion. No bombs, she reported minutes later, our defense got something out of the sky. […] Sometimes it is quiet, sometimes the noise from weapons robs them of sleep and nerves […] Anna packed the car again and left Barcelona yesterday morning. I get card needles from the road again. […] Spring is also coming in the Carpathians. Nargis sends pictures of crocus and of Lilya in front of a wild stream. I saw the first pictures of Lilya almost four weeks ago. On one she slept in the bathtub to protect herself from the bombs, on the next she sat on the train […] Now I see a girl smiling calmly at the camera, much less a child than before. ”
tina Andres on Instagram on March 26, 2022

No for now Save the books from the bombs

After a detour via Spain, Anna has meanwhile arrived in Germany. Nargis is in western Ukraine with her daughter Lilya. Irina stayed in a small village near Kharkiv and took care of other refugees for weeks under the most difficult circumstances. And she wants the publisher’s inventory out of town and moving the books to safer places. That was the plan, it’s postponed so far.

On April 8, Kristina Andres wrote in her short column about Krocus’ three wives: “The rescue of the books must wait. Irina follows her daughter-in-law and little granddaughter to Transcarpathia, to the western end of Ukraine. Everything is different after Bucha. The two should be brought “I will be back soon afterwards,” writes Irina, “they need me to help the refugees.”

Help for Ukrainian publishers and children

But Kristina Andres has long ago secured the digital print data from the Krocus publishing house in Kharkiv. In case of fall. And she’s looking for ways to help Ukrainian publishers. She finds support from Markus Weber from Moritz Publishing. Since the beginning of their column, he has been reading about the women of Kharkiv’s Krocus publishing house on social networks, thinking of the aid program “Adopt a Ukranian Book”, which he sought support for the children’s book fair in Bologna. at the end of March.

For the project, Kristina Andres sends him the print data for a book from Krocusverlag, which she really likes. “It’s a stroke of luck,” she says, “we know these pictures from the mothers who come to us with their children, and therefore I hope and wish that we have found the perfect book, which is now coming to the Ukrainians. children. will.”

“All alone my mother “will be published in May

Moritz-Verlag from Frankfurt am Main takes over the protection of the book about the Ukrainian Krocusverlag, which is to be published in Germany at the end of May despite the lack of paper: “Najmoisha Mama” (“Alone my mother”) with a text by Halyna Kyrpa and pictures of Hrasia Oliyko are printed in Germany in Ukrainian in a circulation of about 3,000 copies. Moritz Verlag is responsible for the organization of printing and distribution, and the printing company donates the printing.

The profit from the sale goes to Krokusverlag. The publishers must be helped, but also the children who have fled: Ukrainian literature should be made available to them here in Germany as soon as possible. Kristina Andres is also in negotiations with Literaturhaus Rostock about a digital reading format that is aimed at Ukrainian children and should also support Ukrainian artists.

In its emergency shelter in western Ukraine, the publishing house Nargis Krokusverlag’s publishing work continues. She writes to Kristina Andres in Dobin (and she writes on her behalf), “time in the Soviet Union took their childhood and youth, and now Russia is taking their childhood and who knows what else.” Will Kristina Andres ever publish her chronology of Kharkiv Krokusverlag or her blue and yellow animal pictures as a book to order? She does not think about that.

On April 10, the illustrator will upload a new drawing. With two unicorns. And a duck. The picture is for Ewelina, 8 years old. “She likes to paint and would like to become an artist later. Ewelina fled from Kyiv to Berlin with her mother.” Kristina Andres has a wish: one day she would like to put the originals in an envelope and send them to Ewelina and all the other children – to a safe place “which will hopefully be in Ukraine”.

A conversation with Sabine Bode, who for many years has dealt with the consequences of war and displacement. more

Sarah Fabi is a psychologist at the University of Tübingen and knows why we are more or less empathetic in some situations. more