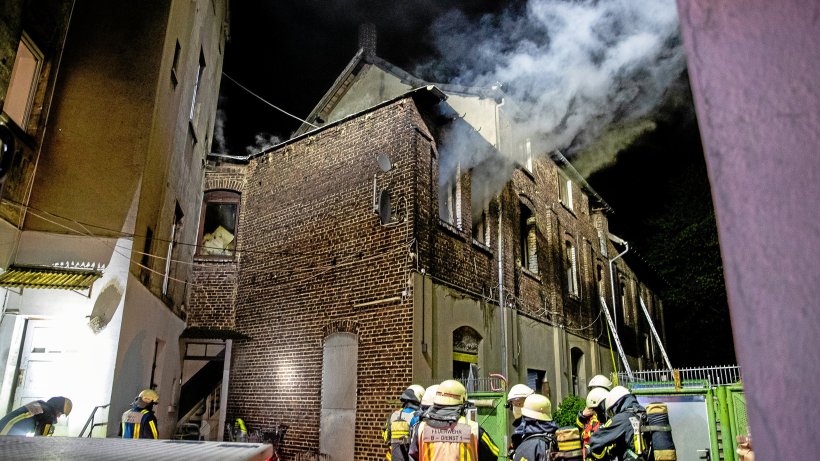 Bochum.
A man died in a fire in an apartment in Bochum-Langendreer. Firefighters returned to the scene Sunday morning.

At a fire in Bochum-Langendreer a man died Sunday night. According to the police, the fire victim is the 47-year-old resident of the apartment, who was not fully engulfed in fire until early in the morning. As reported by the Bochum Fire Department, the Fire in the apartment complex on Ümminger Straße, eleven people, including eight children, were rescued unharmed.

Bochum Fire Brigade: A person dies in an apartment fire in Langendreer

“Shortly before 3am early Sunday morning, passers-by reported an apartment fire in an apartment building on Ümminger Straße in Bochum-Langendreer,” the fire department said. They noticed flames and heavy smoke from an apartment. “When it was completely unclear if and how many people were still in the building, the fire trucks at the main fire and the police station in the center as well as the emergency services and the voluntary fire brigade were immediately alerted,” the fire brigade informs.

When firefighters arrived, it was then confirmed: An apartment on the first floor of the two-story house had been burned “to the full extent” and the flames shot out of several windows. “All occupants were still in the building at the time and therefore in acute danger,” it said Bochum Fire Department. Some of them had to be awakened by the emergency services.

According to fire chief Simon Heußen, the other residents were rescued through the stairwell. In the burned-out apartment, the emergency services would then have one lifeless male person found. On-site resuscitation was unsuccessful. “We assume that the dead man is the 47-year-old homeowner,” police said at the request.

In parallel with the rescue of people, the firefighters had brought the fire under control with three nozzles after 30 minutes. According to the fire chief, the turntable was neither used to save nor extinguish the fire. The post-extinguishing and clean-up work lasted until 05.30. 60 emergency services were involved in the operation. The house is uninhabitable due to the smoke.

When walking along Ümminger Straße on Sunday morning around 9.30am, there is not much reminiscent of the terrible fire and the large-scale efforts of the fire brigade during the night. Only the smell of burning in the air makes it unmistakable that something is different. The fire apartment is diagonally opposite Lidl, but not directly on the street, it is somewhat hidden.

The Bochum apartment is on fire – the house is not habitable at the moment. A man and a woman – local residents – are on their way into the driveway, which is a few meters long. “Late at night, a lot of firefighters and police suddenly came,” says the resident, who woke up. But he saw nothing of the fire in the apartment itself.

A police seal denied access to the house that morning. “The flame confiscated apartment,” it says. From the farm, broken and burnt-out windows can be seen. Shortly after ten o’clock the fire brigade arrives again, a little later followed by the police. The emergency services go back into the fire apartment, some residents come out of their houses and look at what is happening here on Ümminger Straße.

The cause of the fire is now being determined criminal police. According to the police spokeswoman, the fire investigation is still ongoing because investigators were initially unable to enter the apartment. The Ümminger Straße between Ambergweg and the Alte Bahnhofsstraße was closed until around 5.30 on Sunday morning.

To know what happens in Bochum every day: Here for free WAZ Bochum– Sign up for the newsletter!

More articles from this category can be found here: Bochum