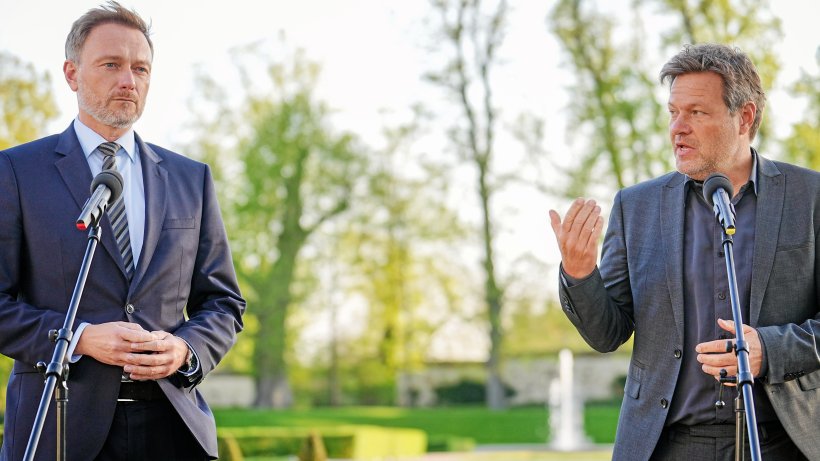 Berlin.
The Greens are hovering, the FDP, on the other hand, in the election valley: This is what is going on between FDP leader Lindner and the Green Vice-Chancellor Habeck.

It is a short scene that tells a lot about Christian Lindner and Robert Habeck: After the Schleswig-Holstein election, the FDP leader is asked if he does not want the Greens to be so successful. “Of course,” Lindner says. Pause for a moment, think again, and then ask back indignantly: “So, do you think we are so small?” He shakes his head annoyed.

Habeck questions are not feel-good questions for Lindner. He finally starts for the third time, this time with humor: “But that does not mean that Robert Habeck gets a discount from me in the budget negotiations. The sympathy and forbearance do not go so far as to be reflected in changed cornerstones for the financial year 2023. ”

Lindner and Habeck, the Liberal finance ministers and the green finance minister, are pretty much the best rivals in a traffic light coalition, as none of them were on the wish list. They are on first name terms, they try to be professional, but close friendship looks different.

NRW election – the next stress test for Lindner and Habeck

The next endurance test is on Sunday, with NRW voting. Most recently, there were signs of a head-to-head race between CDU Prime Minister Hendrik Wüst and SPD challenger Thomas Kutschaty. In the end, both could probably only rule with the help of the Greens – Habeck’s party is in the polls at 16 to 18 percent. Lindner’s Liberals, on the other hand, who currently sit in the black and yellow NRW government, are ten points behind and may not be needed at all.

“Professional. Not anymore,” says an FDP man who has been with Lindner for a long time when asked about the relationship between the two. Lindner finds it unfair that Habeck is currently scoring points as a politician, as the one who allegedly hits the right tone and the Germans’ mood in the crisis. “bladder” some in the FDP call Habeck’s style – but such a thing is currently well received. Others shrug: It’s like in a family: The one who makes the most trouble gets attention.

Habeck fans, on the other hand, feel comfortable with the Vice Chancellor’s verbose, graphic style. Like a few days ago Lindner and Habeck in the park at Meseberg Castle explained why the two-day cabinet retreat in Brandenburg was a good thing, Lindner dryly explained that one could “think strategically”. Habeck’s version sounded more like a philosophical symposium: “It was basically about thinking about the current situation on a larger scale and classifying it into the overall scenario.”

In the traffic light negotiations, Lindner had won the battle for the Ministry of Finance and thus won a house that had become a center of power for the federal government under Olaf Scholz. Habeck was left with the then relatively light Ministry of Economy. But the Russian war of aggression against Ukraine has pushed him into the center of attention.

Since then, Habeck has produced surprising images: The Greens are embarking on energy shopping in Qatar, introduces itself to the affected citizens at the Schwedt refinery, leases liquefied gas vessels. His personal polls are good, and even business leaders are praising the green minister. In the election in the north, where the Greens got a historically good result, 69 percent of those polled said Habeck was a “big supporter” of the state party. For Lindner, the share was 30 per cent.

How are you? “It’s going great,” Habeck says

Habeck in particular, who played out the rise and fall in public perception as party leader, has fond memories of how fickle public opinion can be. In the case of the Greens, they are also currently trying not to burden the coalition unnecessarily by getting on the nerves of their partners.

If you ask around Habeck’s house how things are going between him and Lindner, you get a diplomatic answer: The relationship is good and “very professional”. In case of doubt, the ministers themselves pick up the phone if there is anything to be clarified. Except in cases where they do not.

Habeck, for example, is well aware that his cabinet colleague – unlike him – is still the party leader and must take more account of opinion polls and the mood at the base when making decisions. But he does not want to wave every single signal to the liberal core electorate without comment. To Lindner’s original Tank discount idea For example, he let it be known about prime time airing on “Anne Will” that he did not think she was particularly clever – “everyone just says a little bit about what makes sense to them”.

At the joint performance in Meseberg, the question came to Lindner about it as well Relationship status between him and Habeck. After a moment’s hesitation, Lindner just reached out to answer the question when Habeck wrote, “It’s going great.”

This text was first displayed on waz.de.

The daily newsletter – now with all the important updates about the war in Ukraine.

Secure access to all WAZ PLUS items now at a special price of 40 € per year – click here for the offer!

More articles from this category can be found here: Politics