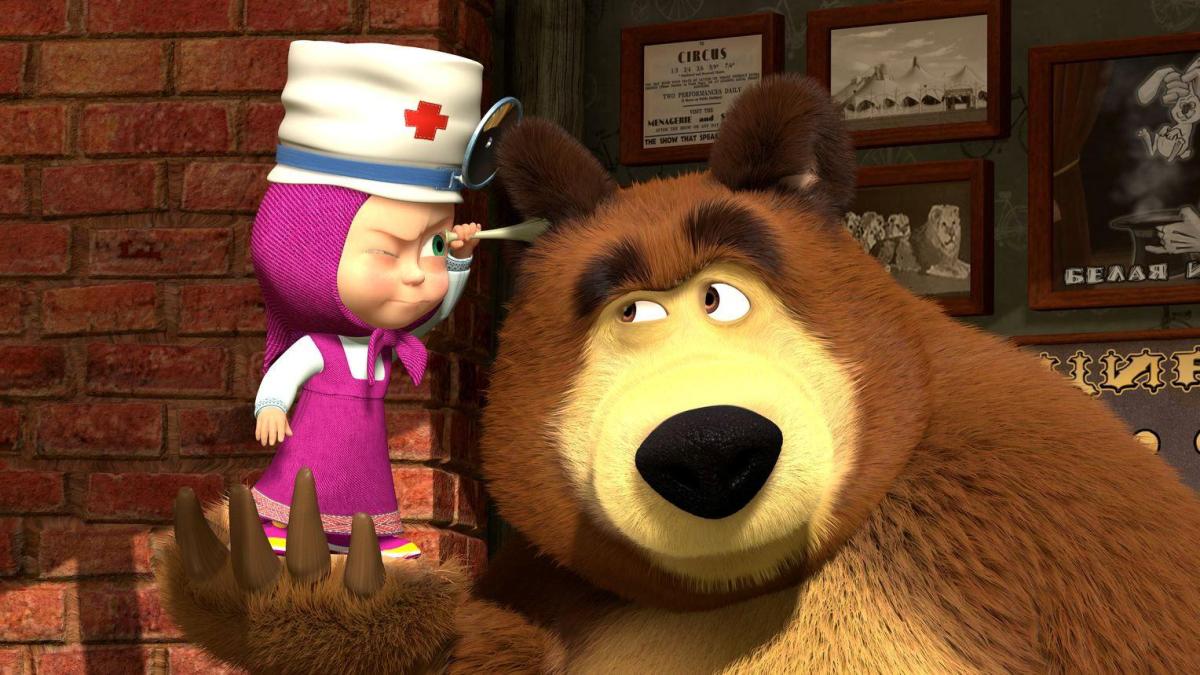 Dthe worst thing parenting does to parents is that they eventually find themselves becoming what they never intended to be – like their own parents. They say sentences to their children that they would never hear as a child. And is already halfway up the wall after the first chords of the theme song in an animated series.

My parents starred in “Tom and Jerry” – and “Thank You for the Flowers” by Udo Jürgens. Two seconds of the hyperactive brass overture of the hyperactive Russian animated series “Masha and the Bear” is enough for me today. And now I have to be a little careful.

Because you do not mess with Masha with impunity. At least if one describes the lad in the old Russian mother’s coat, who lives in a slightly battered gatekeeper house between steppe and forest somewhere in Russia (where Leo Tolstoy must have died a hundred and a few years ago) as an extended arm of Russian propaganda and in light of the Russian massacres in Ukraine along with opera diva Anna Netrebko on the list of Russian cultural values ​​to be boycotted.

The fact that the series, which started on Russia’s internet in 2009 and was produced in Moscow’s Animaccord Studio without state support, is just that – a cultural export hit that is only ballet and piano stars, the epitome of Russia as vodka and Kalashnikov – can not be seriously disputed. There are now 14 seasons (target age: three to five), they are broadcast in 150 countries and more than forty languages.

Only “Paw Patrol” and “Peppa Pig” have a similar reach among (small) children’s series. Girls in Indonesia are called Masha, and around the world there are probably far more Masha dolls collecting dust on children’s shelves than magic wands. Masha came in the “Guinness Book of Records” when one of what felt like a thousand adventures next to the tolerant bear became the most clicked content of the year with four billion views on YouTube.

Is it propaganda now?

The stories always follow the same mechanics, that’s the secret behind all children’s series. Masha visits her friend, the bear, who, unlike the disguised whisk, is only allowed to grunt, in his wooden hut deep in the forest. Then chaos breaks out. The scrap flies. Eventually, however, all goes well: the good bear and the rebellious girl love each other, and order is restored. Until the next raid.

With summaries like this, of course, it’s easy to pull gangs from Russian trolls. In fact, there has been no shortage of attempts to interpret Masha’s global success politically in recent years. In the London Times, Masha was characterized by a political scientist as a Putinic being.

The tolerant Russian bear – the subject of identification for all parents of marginally neurotic, ie completely normal children – is therefore so nice and tolerant that the children in the West do not hate Russia (symbol: bear!) So much. Concerned Baltic politicians intervened.

There were traces of triumph in the Russian propaganda response, some of which were news in prime time on Russian state television. The political and media reactions to the allegedly propagandistic children’s series were described as an excellent example of “Western Russophobia”. So – with such reactions and a possibly, perhaps, soon-to-be-threatened Masha boycott, fascism begins, it sounded. on Twitter the trolls started a Twitter war.

This time it should not happen. If everything that comes from Russia is suspected to be propaganda, just because it comes from Russia, one undermines the concept of propaganda to such an extent that in the end it means nothing at all. A ban on Masha only plays into Putin’s propaganda, as with Dostoevsky’s or Tolstoy’s ban and cancellation of “The Nutcracker” performances.

bang of the pictures

The problem with Masha is not politics at all. The creators of Animaccord insist on their independence, saying they did not get a ruble from the state (and they do not, after all, global merchandising alone brings the studio hundreds of millions of dollars a year). They do not even want to accept their character as an anarchist pioneer in feminism – when Masha, suddenly a symbol of Western decadence, is sometimes harshly criticized in conservative Russia.

And yet one looks at “Masha and the Bear” with a nauseating feeling. It starts with Masha herself, who is so typically designed as a future aunt with her apron and scarf that at least I can not see her without thinking of the crying old women of Mariupol. And it continues with the two wolves, whose crashed ambulance eventually lies next to the road like a sprawling refugee car.

But what I can tolerate is what my parents probably could not stand with “Tom and Jerry”: this pace, this tension in the story, this voice, these cuts. And in six minutes, everything starts all over again.

I’m scared of myself

“Masha and the Bear” is – like its radically decelerated alternative, “Teletubbies” – a series that aims to keep parents away from the television (or tablet) because they just can not stand it all. They prefer to take care of the household, walk through the house with mufflers. The moans and groans are abysmal when talking about children and fur animals – as my parents used to do with cats and mice. And leave the children alone in Masha’s cosmos to a point of neglect.

It can not be good for children’s brains, I think to myself now, these blatant images. This is how children are shot ready for the storm for TikTok. And then I scare myself.