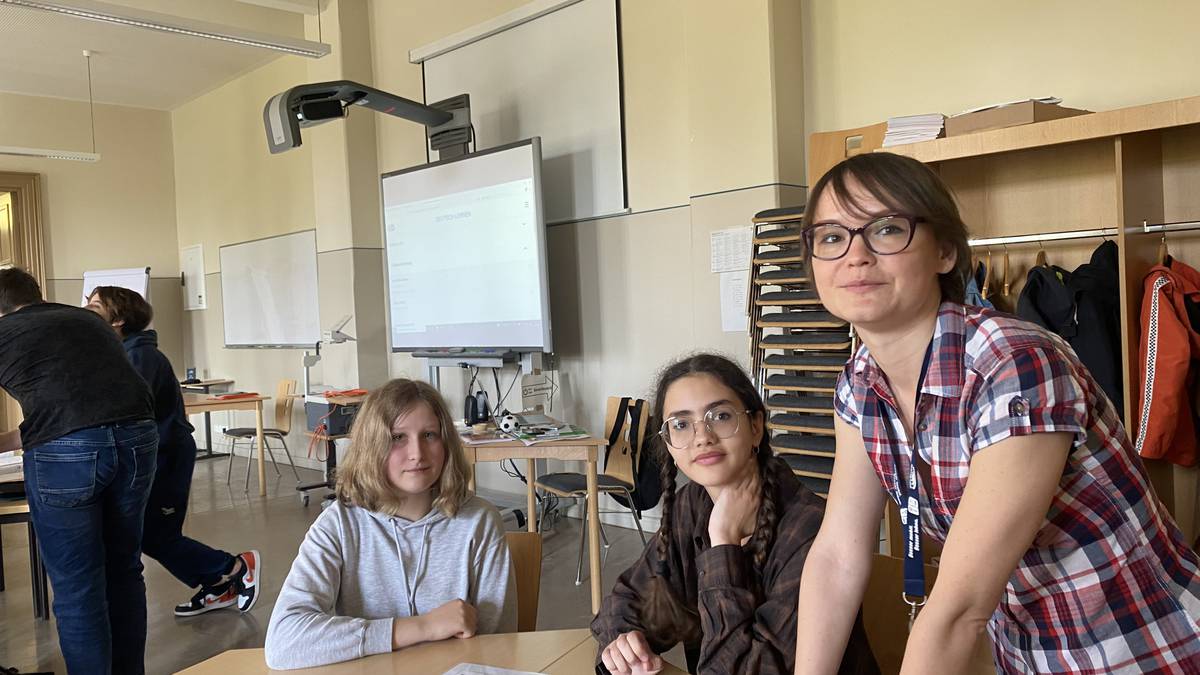 Liudmyla Mashkova starts each school day with a brief survey among her students. What have you heard from your relatives? Does anyone have bad news, does anyone have good news? The 37-year-old from Kiev shares the fate of a dozen young people between the ages of twelve and 16 in his class at Helmholtz Gymnasium in Potsdam. They all fled the war in Ukraine. They do not all know exactly how to proceed in Germany. So now they learn German, five hours a day.

+++ All developments about the war against Ukraine in the live blog +++

Mashkova has already used the textbooks from a German specialist publishing house in Kiev, and she has also used the software for computers and projectors. There she taught young people and adults German. When she arrived in Potsdam in March, the little woman with the short hairstyle and dark glasses knew immediately what she wanted. “I was sure I could help teach Ukrainian children here. And I wanted to bring my two children to safety. ” She drove the car for three days. She has relatives in Potsdam, where the three were initially able to find housing.

The European Union will initially provide Ukraine with an additional 500 million euros in military aid.

Mashkova’s husband is fighting in the military. They talk on the phone almost every day, she is not allowed to talk about it. When the war broke out, the whole family fled to the grandparents’ house in the country, 14 people in an enclosed space with nothing to do and the fear that the Russians might get closer. She now wants to teach in Germany for a year, says Mashkova, and then see what happens next.

Brandenburg has so far hired 42 teachers and teaching staff from Ukraine. There are no nationwide numbers, but all federal states are recruiting teachers from Ukraine and hiring, some since March, others only now.

Preparatory groups such as the mixed-age class taught by Liudmyla Mashkova are the exception in Germany. According to a study, schoolchildren who have fled from Ukraine learn in Germany primarily with schoolchildren from Germany and not in separate classes. In a representative survey of teachers at the Robert Bosch Foundation, 78 percent of those whose schools had already received Ukrainian children or young people indicated that they were taught in full or in part in regular classes. Only 18 percent of the respondents had education in separate so-called welcome classes.

During the study period from early to mid-April, schools in Germany admitted about 60,000 students from Ukraine, according to studies by the Conference of Ministers of Education. According to data from the Conference of Ministers of Education and Culture, more than 105,000 refugee children and young people from Ukraine were admitted to public or vocational schools in the first week of May. According to the federal states, most of them, more than 101,000, have already been taught.

The Association of Education and Science (GEW) calls for the rapid integration of refugee children and young people into normal classes. “For the coming school year, it must be ensured that the children and young people who have fled Ukraine are integrated into the regular classes at schools in Germany,” GEW chief Maike Finnern told the editorial network Germany (RND). “Welcome, intensive or language tuition can only be a temporary solution.”

Following the traumatic experiences of war and flight, it is important to offer students normalcy again and to enable social contact with their peers, she said reasoned. “However, this is only possible if the regular, language and welcome lessons are not completely crowded, and the support measures run over a longer period of time. “Schools urgently need support for a good integration offer, which also includes teaching in the mother tongue: more staff, extra premises and increased material resources are the requirements for politicians.”

In her class, the classes go well despite the age difference, says Liudmyla Mashkova. “The elderly help the younger, and those who have already had German lessons in Ukraine help those who are at the very beginning.” Mashkova’s protégés come with the German students of the same age so far only together to the sports club in the afternoon.

Is Ukraine losing the will to negotiate with Russia?

Ukrainian Foreign Minister has proposed to recapture Crimea. Military experts consider such statements to be dangerous: If Ukraine becomes more uncompromising and fully reckons with victory, Russia could even escalate the situation with the atomic bomb.

Students learn in a state of limbo. Many still keep in touch with their old classes via video conferencing, some also take exams there, to which Mashkova releases them. She wants to reach A1 level with the group before the summer holidays. An ambitious plan, they only started after Easter. But then the students would have something in their pocket, no matter where they ended up after the holidays.

At this point you will find external content from Spotify Ltd., which complements the article. You can see it with a single click.

I consent to external content being displayed to me. This makes it possible to transfer personal data to third-party platforms. More about this in our confidentiality notices.

16-year-old Lena does not have to ask. The girl with dark pigtails and large glasses has already had German lessons at home in Odessa. The family will stay in Germany, the mother is a doctor. Lena is also preparing for an education in Germany.

Can German schools cope with the attack from Ukrainian students?

The chairman of the Education and Training Association (VBE), Udo Beckmann, warns: “Schools have been at their limit in terms of staff for two years.” was addressed in urgent need of support from additional teachers, including the employment of Ukrainian teachers who have fled. ” But the use of multi-professional teams and interpreters must also be expanded as soon as possible.

“We will continue to feel both the effects of the pandemic and the influx from Ukraine to the schools at the beginning of the new school year,” Beckmann said. “Before the new school year begins, political leaders have a duty to ruthlessly disclose the restrictions that will arise in the face of staff shortages and the lack of room capacity that cannot be resolved in the short term,” he demands. “It can and must not be the job of school administrators and teachers alone to convey such contexts and deal with the conflicts that arise as a result,” Beckmann said.

No one knows exactly how big the challenge will be for the German school system. The chair of the Conference of Education Ministers (KMK), Karin Prien (CDU), calculated that Germany should prepare for up to 400,000 refugee students and should use 24,000 teachers for this.

Minister of Education Karin Prien: “The school system is still under massive pressure”

Germany faces the challenge of integrating refugee children from Ukraine into schools. How well are we doing? And: Are the schools really over the worst when it comes to Corona?

The credo of the Priens and the other education ministers in the federal states: integration is inextricably linked to learning the German language. It’s clear to everyone: at the moment no one knows how long people will stay. But for children who are there at the beginning of the next school year, it can be several years – everyone is aware of that. It is important to avoid the mistakes that were made in the past when it came to integration issues, the ministers believe. Basically, you have to approach the case from the beginning, as if you stayed here longer.