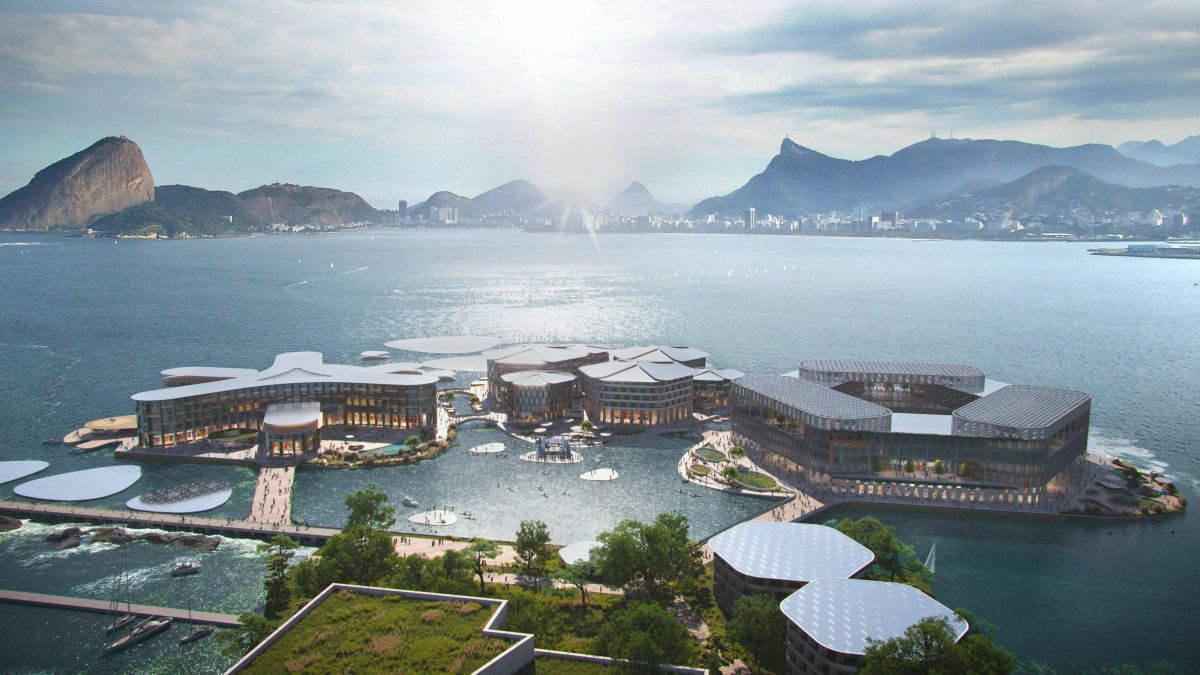 South Korea’s metropolis Busan is dressing as a leader in architectural technology, even before its application for the 2030 World Expo. In late April, the city, UN-Habitat and the Oceanix initiative presented the design for the first prototype of floating cities, which should provide coastal residents with a safe place to live, even when sea levels rise.

The concept is similar to an oversized water lily farm: From 2025, small, rounded fleets with four to six storey houses will be launched in a port in the coastal town, which will ultimately offer 12,000 people space to live, work and play on an area of ​​6.3 acres. Solar and wind power plants supply the city with electricity, which of course recycles its wastewater. Bridges connect the islands with each other and to the land.

Thanks to the modular design, the maritime community can even be expanded to accommodate more than 100,000 residents. Philipp Hofmann, head of Oceanix, as the project is called, therefore stressed the importance of the day for the design presentation: “Today is a crucial milestone for all coastal cities and island states on the front lines of climate change.” The initiative is well on its way to showing that floating infrastructure can create new land for coastal cities. And this sustainable.

Hofmann was forgiven for the profit. Because the dream of escaping from the climate to the sea has been unfulfilled long enough. It has been known for decades that climate change could engulf the habitats of several 100 million coastal residents due to rising tides. In the Pacific, even the island states could be under water.

Japan has always tried everything possible with electronics – and often the impossible. Every Thursday, our author Martin Kölling reports on the latest trends from Tokyo.

As early as 2010, the Japanese construction group Shimizu came up with the idea of ​​green life rafts with a diameter of three kilometers and a 1,000-meter-high tower in the middle. According to the concept, these mega-fleets were to float on the calm equator and offer 50,000 people places to live and work.

In 2019, the start-up Oceanix with a group of designers and the company of the Danish star architect Bjarke Ingels presented the more realistic variant for coastal development with support from the UN. That was good news for Ingels. The Japanese car manufacturer Toyota hired the Dane for its smart city “Woven City”, where the Japanese would like to try out new ideas for mobility and life.

In South Korea, he also found a potent partner for his floating city in Samoo, an award-winning architectural firm for Samsung, Korea’s largest group of companies. The idea is to build a floating foundation on a base of sustainably produced concrete, which houses machinery and storage space in the basement and supports a base plate for the buildings.

The weight of the flat development is distributed as evenly as possible. Greenhouses are also planned to provide the local community with vegetables all year round. Even the coffee grounds of the café-loving Koreans find agricultural application in Angel’s concept. The architect suggests that mushrooms should be grown on it.

For Busan Mayor Park Heong-joon, the modern version of Noah’s Ark is part of the city’s motto “The First to the Future.” His government wants to be the first to introduce and scale up “this bold idea,” Park said at the presentation of the design. “Because with rising sea levels and the devastating effects on coastal cities, our common future is at stake.” According to Oceanix, the first parts of the city complex are expected to be completed in 2025.

The project is always up-to-date. The World Meteorological Organization warned in a report this week that there is a 50-50 chance that the global average temperature will rise more than 1.5 degrees Celsius above pre-industrial levels in just one of the next five years. The 1.5 degree target has been the target since the Paris Agreement in 2015 to reduce the risk of irreversible climatological turning points.