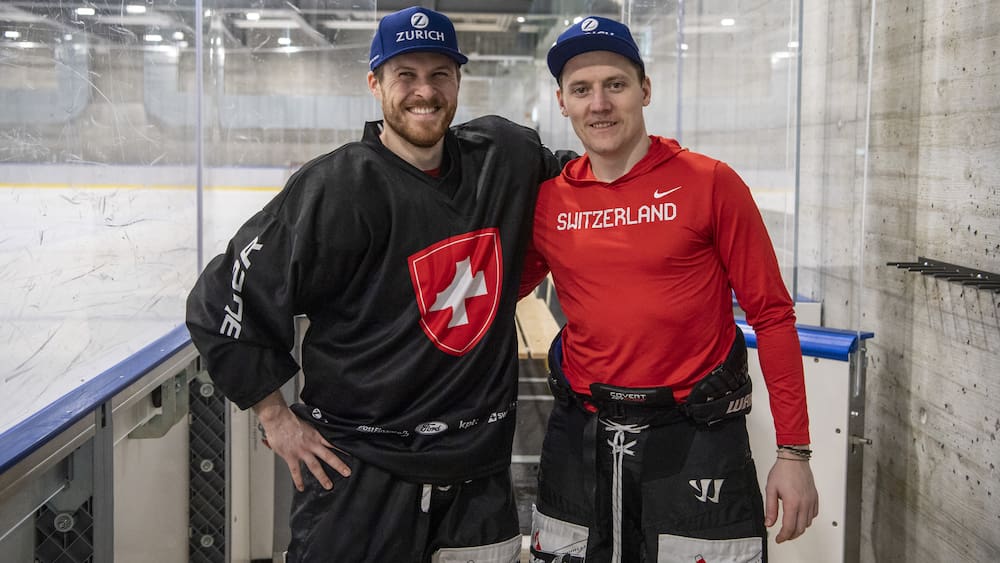 The Swiss national ice hockey team spends a few days in the performance center in Cham to prepare for the World Cup in Helsinki. On this ice, two players are constantly joking with each other: Christoph Bertschy and Killian Mottet. Things looked very different during the quarter-final series between Lausanne and Friborg Gottéron. Bertschy and Mottet were constantly in conflict.

Then national coach Patrick Fischer decided to unite the two in a storm line. Next year, the two will still be teammates in Gottéron. “I’m doing some preparation for Christian Dubé,” laughs the national team coach.

The photographer asks Killian Mottet and Christoph Bertschy to stand next to each other. Bertschy grabs Mottet in the collar: “So?” They laugh before lining up arm in arm. “Yeah, I think it’s better if you smile,” laughs Killian Mottet. You are relaxed.

Blick: How do you manage to get from the emotions on the ice to a friendly get-together?
Killian Motet: We’ve known each other for a long time, Christoph and I. But when they say that friendships do not exist on the ice, we give the proof. In this series, we really were not friends (laughs). It even rumbled a lot.

Christoph Bertschy: You can say it again! In this series, what happened happened. But when you are a hockey player, it is easy to forget it. You push it aside and continue living as before. Here we shook hands and then it was over. It has often happened to me that I have played against friends. When the final is over, there will also be other players you fought with. Just because you’re tough on the ice does not mean you hate yourself right away. These little fights give me a little more energy. I also think Killian …

Christoph Bertschy: It does not surprise me. But when you play the playoffs, you fight against everyone. It does not matter about Killian, Desharnais, Walser or DiDomenico. This is especially true when playing against each other as often as we do.

Killian Motet: We were often on the ice at the same time. But face-off was always the hardest thing, we always stood side by side and had only one wish: to grab the puck as soon as it was on the ice. As soon as our sticks touched, one could feel the tension. When we first played in the center circle, it went wrong every time. He put the stick down, I put mine over it, he put it down again. Now we both laugh at it. We both defended our colors and I think we did well.

Christoph Bertschy: Otherwise we would not be here on the national team.

Killian Motet: Obviously, we also wanted to show him where he was going in Friborg. The players, the audience, all made him impressed and looked forward to joining us.

Christoph Bertschy: Yes, I was impressed and I am very happy. But I experienced the exact opposite of what he experienced. Throughout the season, I have said that I want to achieve something with Lausanne, to do something good. When it came to the quarter-finals against Friborg, I was obviously very motivated. I also wanted to show them that it was the right decision to sign me. It obviously gave me extra motivation, even though it would have been cool if we had only played against each other in the semifinals or the final.

Did you talk to Killian during the negotiations?
Christoph Bertschy: no I do not talk to many people in such situations. That was the case when I came back from the US or when I was in Bern. I only talk to people I know really well, such as Andrea Glauser, who I have known since I was a child. But without player from Friborg.

Killian Motet: It was last year in preparation for the World Cup in Riga. But we talked just as much about Friborg and about Lausanne. As a player, you naturally wonder what is going on in the other clubs.

Christoph Bertschy: Yes it’s true. But I did not call you during the negotiations. I also knew it was a good thing, also because then I can play with you.

Kilian Motet: But I have not extended yet.

Christoph Bertschy: Have you still not signed?

Killian Motet: I still have a year left. So we’ll see. But I found out through social media that Christoph had signed in Friborg. Gottéron needs players like him who have so much quality. I was very happy when I found out. As for me, everyone knows I have a year left on my contract. We will see.

Christoph Bertschy: I do not think it takes me to convince him. he will be I hope so at least. At least it’s more fun for me to be with him on the ice today than when we face each other. Patrick Fischer would definitely like to see how things can work out between us. I think we’ve been to the Olympics together, right?

Killian Motet: Yes exactly. It actually worked pretty well. But you have to ask Patrick Fischer how he saw it. We know how to do it to make it work. We’ll see how it goes. I think it’s going to be fine.