The first gallery in Bavaria that exclusively curates NFTs is currently located in the center of Munich. It consists of a shop window that will show changing works over the coming weeks. The aim is not only to present the works, but also to initiate a critical study of NFTs.

Anyone standing on Marienplatz can hardly miss it. The tavern zur alten Hauptwache has existed there for over 300 years – but it is better known as Donisl. To the left of the inn is a small alley, the Donisl Passage. It is beaming right now out of a wide shop window. It features multiple screens on which digital artwork flickers: a urinal made of coarse pixels lying on its back, the Mona Lisa with an ominous mask in the form of the Bitcoin symbol, or a pulsating tangle of colors and shapes. The artworks are NFTs – that is, digital works such as images, animations or videos that have been immortalized with a post on a blockchain such as Ethereum or Tezos. The freely accessible exhibition bears the title Dawn of the Metaverse and is the first gallery in Bavaria to present exclusively NFT-based art.

The NFT show, which runs from May 7 to June 26, is organized and curated by Munich philosopher and artist Max Haarich and Gleb Divov, a Lithuanian digital entrepreneur and artist. The idea is that each work of art should illuminate an aspect of the meta-verse – where NFTs should represent a core technology. “We as a society are only in the beginning and can still think about the subject of metavers in so many directions that are a hundred times more creative and revolutionary than some of the consumer worlds currently being sold,” Haarich tells 1E9. “In selecting artists, we place emphasis on a balanced mix of international and local as well as established and up-and-coming artists.” Five works are to be shown for two weeks each, which are then replaced with five new ones.

The exhibition Dawn of the Metaverse takes place as part of Munich NFT May, a series of events and debates dedicated to non-fungible tokens and their impact on art and culture. With their exhibition, Haarich and Divov not only want to promote NFTs, but instead contribute to the discussion about the rather controversial technology. And also the partly unhealthy economy that has formed around them. “We are currently seeing the negative consequences very clearly,” Haarich says. “Early to mid-last year, almost all NFT coins were economically successful or at least stable due to the extremely rapid capital inflow. In the current bear market, declining capital is increasingly concentrated in the top projects.”

The sale of virtual land in the Bord Ape Yacht Club universe Other side traded for millions of euros. But almost all other NFT collections are currently declining in value. Also because several users sell them to invest in hyped projects. “Every coin invested there can no longer go to an up-and-coming artist so quickly,” Haarich says. “I think that is in a way unfair, because I think it is precisely the artists who have produced millions of digital works of art in countless night shifts who have been given the space in the first place. Sometimes they have to watch helplessly while their NFT space gentrifies. “ 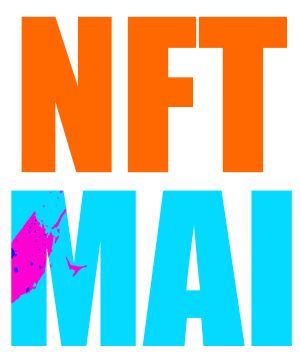 In May 2022, Germany’s largest series of events for NFTs in the fields of art, culture, politics and more will take place in Munich – organized by the Blockchain Bayern Association. The events include lectures, debates, workshops, exhibitions and shows.

1E9 is the official media partner for NFT May.

Also in other respects, says Haarich, he as an artist and curator of technology is quite ambivalent. “In my opinion, NFTs offer incredible potential in many areas, but they also pose obvious challenges for ecology, economics and society,” Haarich says. “Whenever possible, I only use NFTs on energy efficient blockchains like Tezos or Oasis. But I also very consciously use NFTs as a medium for my engagement with NFTs because it places me directly in that area of ​​society. , as my work is intended. “

For the show, Haarich explains, he and Gleb Divov have “made it a little easy for themselves”. Since the creation, sale and transfer of NFTs in particular are energy-intensive transactions, they only included NFTs in their issuance, which were already embossed was. “And we do not sell any NFTs ourselves, so we leave it up to the artists whether they give their NFT a price, wait for offers or just want to show it with no intention of selling it,” says Haarich. “Strictly speaking, this means that the exhibition itself does not produce any NFT-related CO2 at all, and therefore there was no reason for us to exclude certain NFT ecosystems.”

It’s about technologies and ideas that we can use to make the world a better place. You support constructive journalism instead of arguments and problems! As a 1E9 member, you get early access to our content, exclusive newsletters, workshops and events. Above all, you become part of a community of future optimists who learn a lot from each other.

For the pure reception of art, it makes absolutely no difference whether the displayed digital artworks are linked to an NFT or not.

Art can stand on its own

Despite the numerous debates about non-fungible tokens and pop culture phenomena such as the Bored Ape Yacht Club, a study by the digital association Bitkom showed that that 68 percent of all Germans have never heard of NFTs. According to Max Haarich and Gleb Divov, this is more of an option than a problem. “For the pure reception of art, it makes absolutely no difference whether the displayed digital works of art are linked to an NFT or not,” says Haarich. “The difference only comes into play when you want to know more about the work’s origins or are considering a purchase.”

Haarich also hopes so Dawn of the Metaverse an “educational dimension” also unfolds. “[Die Ausstellung] is located in the heart of Munich on Marienplatz 1, thus allowing us to bring the NFT world closer to random passers-by, ”he says. He hopes and believes that “people will find the pictures interesting and will know more about this world”. But first and foremost, it is about digital art, which acquires an additional dimension through the “physical space”. “The gallery allows us to specifically highlight specific works from the infinity of the blockchain,” Haarich outlines. “In the long run, I am convinced that we will see many more NFTs in the physical space when displays – whether they are LED screens or smart fabrics – become cheaper and more energy efficient.”