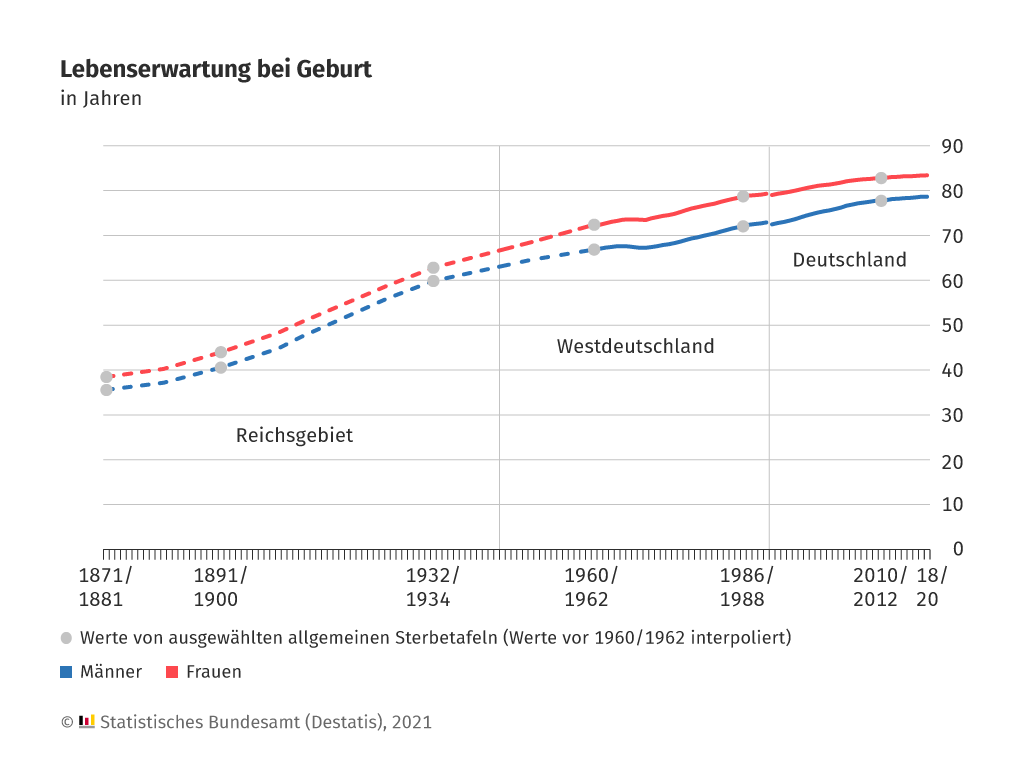 Life expectancy is stagnating, the main reason being the high number of deaths during the corona pandemic WIESBADEN – According to the results of the mortality table 2018/2020, the average life expectancy is currently 83.4 years for newborn girls and 78.6 years for newborn boys. As the Federal Statistical Office (Destatis) also reports, life expectancy for newborns has changed very little compared to the previous mortality table for 2017/2019: by +0.01 years for boys and by +0.04 years for girls. The main reason for the almost stagnant development is the unusually high number of deaths at the end of 2020 as a result of the second wave of the corona pandemic. Previously, the life expectancy of newborns for both sexes had increased by an average of 0.1 years since the calculation for the years 2007/2009.

Decline in life expectancy in Saxony

In a country comparison, according to the current mortality tables, girls in Baden-Württemberg still have the highest life expectancy at birth with 84.2 years, and boys born there at 79.9 years. As before, the lowest values ​​are recorded for girls in Saarland at 82.3 years and boys in Saxony-Anhalt at 76.5 years. The development in Saxony was striking: Compared with the previous mortality table 2017/2019, the life expectancy there decreased significantly for both sexes in the period 2018/2020. For newborn girls from 84.0 to 83.8 years, for newborn boys from 78.1 to 77.8 years. Saxony was particularly hard hit by the corona pandemic in late 2020 due to high mortality. There was also a clear decline among girls in Bremen from 82.8 to 82.6 years and among boys in Berlin from 78.6 to 78.4 years. In Schleswig-Holstein and Thuringia, life expectancy for girls has increased by 0.2 years. In most other states – as at the federal level – there have been very few changes.

With the inclusion of 2020 in the mortality table 2018/2020, a year was included for the first time in the calculation of life expectancy, where the corona pandemic had an impact on deaths. To compare mortality in 2020 with that in 2019, death rates are used that put the number of deaths relative to the population. The number of deaths per 1,000 inhabitants is the so-called general death rate, which does not take into account differences in the age structure. It has increased in both sexes. Standardized death rates, which take into account differences in age structure, also show an increase in mortality for both sexes in 2020 compared to the previous year. A look at individual age groups shows that mortality in 2020 compared to 2019 increased for both sexes, especially for over 75-year-olds.

Due to the increasing proportion of the elderly in the population, the number of deaths in Germany is currently expected to increase from year to year. From 2019 to 2020, it increased by about 46,000 cases. However, according to the final data now available, less than half of these, namely about 20,000 cases, can be explained by the higher proportion of older people.

The trend in mortality in 2020 can only be interpreted in the light of measures to curb the corona pandemic. In addition to avoiding COVID-19 deaths, the measures and behavioral changes may also have ensured that fewer deaths were caused by other infectious diseases such as influenza, which also affects the measurements taken into account here. Decreases or increases in other causes of death can also have an effect on the development in life expectancy and death rates. The final results of cause of death statistics for the year 2020 will be available in August 2021. Press release no. 327 of 8 July 2021 provides the first preliminary results from the cause of death statistics for 2020.

Methodological notes
The lifetime table for 2018/2020 for the Federal Statistical Office is a so-called period life table. It puts the number of deaths in the years 2018 to 2020 in relation to the population in the individual age years and uses this to calculate the life expectancy in several steps. It is therefore a snapshot of the mortality of the entire population in these three calendar years. The calculation does not contain any assumptions about how the expected service life will develop in the future. The life expectancy of newborns indicates how long they would live on average given the current survival conditions. Statistically, 65-year-olds live longer than newborns because the risk of death no longer has to be taken into account before the age of 65. Mortality tables and thus the results for life expectancy are always calculated for three-year periods within the framework of the official statistics in order to compensate to a certain extent for the usual fluctuations between the individual years.

The age structure effect on the number of deaths can be calculated using so-called degradation techniques. The mentioned result is based on a separate consideration of death rates for the individual years for both sexes. The extra day of the leap year was taken into account when calculating the 2020 death rates.

More info:
Detailed methodological explanations and further descriptions of results can be found in the publication “Life table 2018/20 – Methods and report on the results of the current calculation of periodic living tables for Germany and the federal states”.
contain. Current mortality tables for Germany, western and eastern Germany (excluding Berlin) and an overview of further results at the level of each federal state are available in the section “Deaths, life expectancy”.