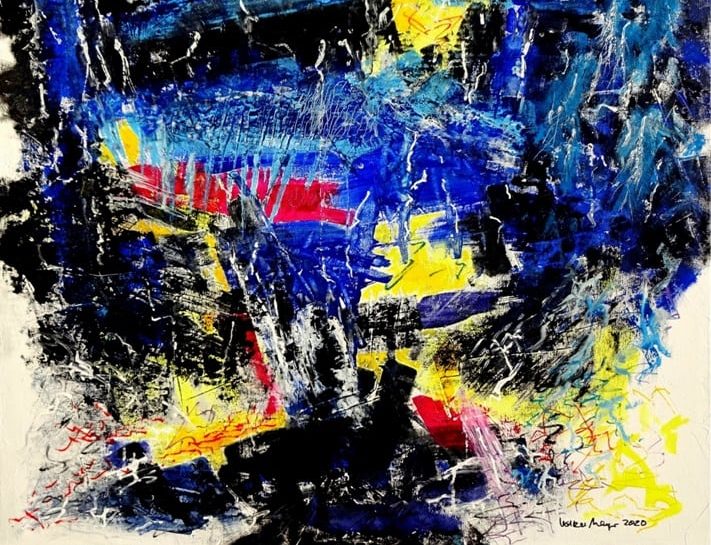 Volker Mayr had heard of Bitcoin. Now and then, in the news on NTV; that the price of digital gold has plummeted or reached new heights. It never interested the 80-year-old painter. Cryptocurrencies? NFTs? Metaverset? It’s an expression of a strange, very strange world. Suddenly he is drawn into her, against his will.

In early April 2022, his life’s work will be for sale on a crypto exchange on the Internet. Volker Mayr has a profile in the online gallery unique type, over 10,000 artists and photographers are registered there, their images stored as JPEGs. Someone offers Volker Mayr’s works as non-fungible tokens (NFT) on an NFT platform called Mintable without the artist’s knowledge. He wants to find out who is behind it. One week ago, he informed the editorial staff of BTC-ECHO about the incident, which is doing its own research. An odyssey into a Kafkaesque system begins.

Many already see NFTs as one of the greatest media revolutions of the 21st century. Any digital object can be transferred to blockchain and sold. Artists and musicians open up new sales opportunities for their digital property. Last year, the market exploded by 25,000 percent to $ 17 billion, according to NonFungible.com. Even traditional art houses like Christies got involved.

At the same time, media reports of artists whose works have been stolen from the Internet and offered illegally on NFT platforms have been on the rise for several months. The full extent of this new form of art theft is difficult to quantify, exact figures are not available. But only an online gallery, DeviantArtfound high The Guardians 80,000+ stolen works from its customers on NFT marketplaces.

“It’s much easier to create counterfeits in the blockchain space than in the traditional art world,” Tina Rivers Ryan, a New York-based curator and digital art expert, told the British news magazine. In fact, it’s so easy that bots now seem to find their way around online galleries and commit the theft completely automatically.

Theft of an NFT is hard to fight

Fighting against this is all the more difficult for the affected artists and it costs energy, time and money. Complaints online and in the media are getting louder and louder. Many victims feel alone with the problem. There is great uncertainty: Who do you turn to in such a case? How to sue anonymous crypto wallet owner? In which jurisdiction? “As a lone fighter, you can do a little,” Volker Mayr says on the phone to BTC-ECHO.

Before retiring in 2002, he was a journalist, he once built this Free Radio Berlin with on. Today he lives in Grunewald in Berlin. During the day he takes care of his wife, in the evening he paints. Beautiful, expressive images. Even his grandfather was a painter, Mayr says. He has used a brush since childhood, has organized exhibitions, sold works and won awards since the 1970s.

90 percent of his works circulate as NFT

First, he received questionable emails from an NFT stock exchange in Japan, which are also available for BTC-ECHO. It says his works were sold as NFTs for tens of thousands of US dollars. They are willing to transfer the money to him, minus a commission, but they want data from him, proof of authorship. Mayr hesitates at first, then finally cooperates, he never sees any money. The same thing happened to other German-speaking painters on the platform, they tell him when asked. A scam, he thinks today. That’s just the beginning.

If his works are already being sold in the blockchain area, he will at least make some money. So Mayr joins Mintable, an NFT marketplace with a reputable reputation. But 90 percent of his works already exist as NFTs. Some are for sale at the time, one for the equivalent of $ 1 million in ether. Mayr creates his own account, spends the next few evenings trying to understand what’s going on, by clicking through the transaction history for his photos etherscan: “I was like a blind man on the piano.”

BTC-ECHO contacted Mintable Support a week ago disagreement. An admin who explains that such cases are taken very seriously. Mayr should contact the team via his Twitter account and provide proof of ownership. He does and gets no answer. To this day, he does not know if Mintable has become active. The support administrators at Discord have not yet responded to another request from BTC-ECHO yesterday afternoon, April 11, 2022.

He stays on the injury

Some of the stolen NFTs have since disappeared, Mayr said. He could complain about others directly through the portal, often for a fee. And the process does not always work.

Sometimes a file cannot be created or the image is not displayed. A third of his works are now in his possession as NFTs, but they are worthless. No offers were received. Volker Mayr bears the costs. He spent a total of over a thousand dollars.

He hopes that at some point artists will join forces in class action lawsuits and that consumer protection will take action. Until then, he protects himself – with an absurd measure: Before Volker Mayr uploads the next picture to his artist profile, he will from now on always make an NFT of it. This is the only way he will feel safe from further theft.