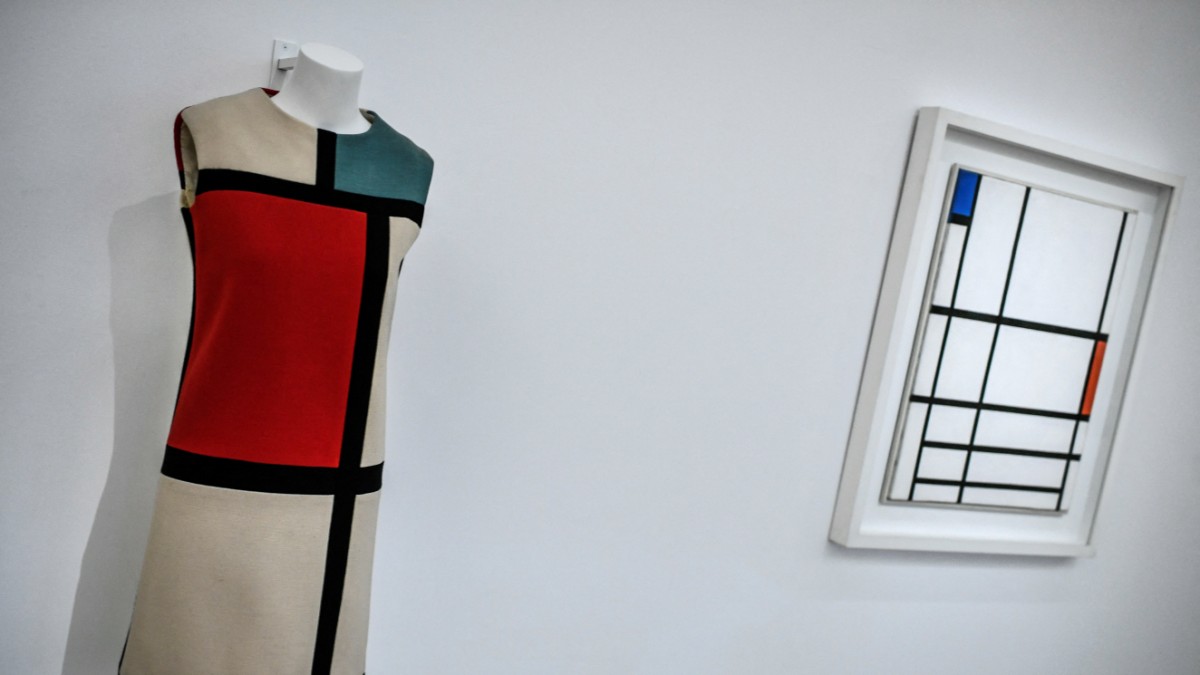 Two squares, black lattice pattern, red and blue, yellow and green. Both works are made of fabric, one is art, the other a dress. The painting is by Piet Mondrian, the stiff, hasty dress is designed by Yves Saint Laurent. It looks like the head and legs are sticking out of the stretcher and the canvas like the sandwich man on the poster.

Dress and art meet in Paris exhibitions at six museums. And because the tribute stone pays homage to the great couturier Yves Saint Laurent, and the public enthusiastically rediscovers his cultural institutions along the exhibition route, the old question arises: is a dress like this just a dress? Or even art? Maybe even the bigger art?

The trip is a great success, the whole of Paris seems to be constantly on the way to Yves Saint Laurent, this winter he comes alive at museums such as the Center Pompidou, the Musée d’Art Moderne or the Louvre, which above all is the terrain of art. In the exhibition project, fashion is not presented as a competitor to art. Even the catalog shows stark old images from the glamorous nightlife of the 1970s, which unfolded in bars and on rooftop terraces between Marrakech, Paris and New York, where Yves Saint Laurent posed with artists such as Andy Warhol or Salvador Dalí. That the question of the relationship between art and fashion arises, means first and foremost that there is something to be gained.

The pictures stay at the museum, the dress can march out

That art is more, that the formula for escalation ranges from crafts to arts and crafts, is not the fault of art. In the Renaissance, painters and sculptors did not shy away from large gestures and symbols until the idea of ​​genius also prevailed in their guild. Anyone who worked with marble, canvas, or bronze no longer had a workshop, but a studio; Signature and name guaranteed the extraordinary, sometimes also the supernatural.

This separation of arts and crafts is now well over half a millennium old. The art is still there, but the traditional craft has changed. In fashion, with industrialization, tailors and weavers were replaced by specialists who, if very successful, also used their names to vouch for special quality, for originality and authenticity – even if they were mass-produced.

The first of these names – Coco Chanel – established itself in the 1920s, when art was still trying to find the right relationship with the rapid development of technology and industry. The era was shaped by the world war, the revolution and the factory and called for more than the artistic individual, the lonely genius. The technology-loving Italian futurism was founded by a group of artists in the Soviet Union who designed the party’s grandstands, rostrums and newsagents.

The Bauhaus in Germany, meanwhile, explained that artists probably felt better in the medieval Bauhütte than in the bourgeois salon. Walter Gropius understood the task of the artistic avant-garde, that is, artists such as Paul Klee, Wassily Kandinsky or Oskar Schlemmer, above all to be to guide and inspire talented young people in the workshop. “Architects, sculptors, painters, we must all return to the craft!” This then developed into the subject of designers designing chairs, office tables, rugs, steel lamps or cloth fabrics for the machine age.

For the Bauhaus generation, the art museum was no longer the end or goal of their work. Nevertheless, the museums included their designs, sketches and prototypes in their collections – the basis of the design museums, where the fashion – from the first colorful sketch to the style-defining mantle – is preserved, researched and exhibited.

Yves Saint Laurent liked to be photographed with his seamstresses

But the design museum is clearly not enough for the huge self-confidence of the luxury industry, which sticks to proper names, even though those who wear them are long dead. It is the aura of genius, of the lonely artist, that must radiate on the label. And it’s only at the art museum. Such an extraordinary, extremely talented designer as Yves Saint Laurent, despite all his arrogance, never claimed to be an artist in his lifetime. On the contrary: He was happy to be photographed surrounded by his seamstresses. And used his wealth and his exquisite taste to put together an extraordinary collection together with his partner Pierre Bergé. Yves Saint Laurent appreciated art and drew inspiration from it – resulting in the most beautiful visual punchlines in Paris now. Like the double diamond.

But despite all the euphoria, one thing can not be overlooked: Piet Mondrian’s reduced, blueprint-flat paintings, after almost a century at the museum, still stand in the way of their neighbors from Impressionism, Fauvism, Expressionism with simple coolness. They are a new design of seeing and feeling. Mondrian knew that if this reduction was successful, the key figures would be reshuffled.

And the lines and color areas of the dress that are so similar are, after all, just a pattern. Made for shop windows, boulevards or restaurants to stand out, elegant, modern, sleek. The genius of Yves Saint Laurent’s version of black, white and red is that once his dress has had enough of the museum, it can just go out again.