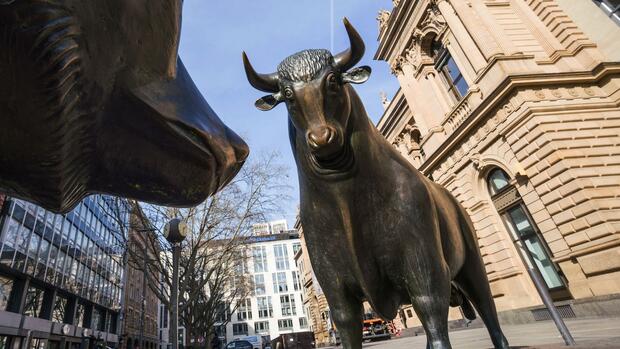 Düsseldorf There may be further turbulence in the stock market in the short term. From a perspective of a few months, it is more likely that stock buying is worthwhile.

This can be deduced from data from the Handelsblatt survey Dax-Sentiment. After evaluating the study, sentiment expert Stephan Heibel expects stock markets to be significantly higher over the next three to six months. “It has been like this at least twice before when we have had such negative emotions,” he explains.

The sentiment on equities has dropped to minus 5.8 and is therefore in the realm of extreme pessimism. This continues the historically bad mood. This value is negative for 18 consecutive weeks. This has never happened since the Handelsblatt survey started in September 2014. Even in the 16-year history of the analysis company AnimusX’s more comprehensive study with Heibel as owner, there has never been such a long phase with a depressed mood.

But why can there be turbulence in the short term? On the one hand, this is related to the increased investment rate. Many investors have used the past week’s low prices to buy shares and will therefore be absent in the coming weeks.

A comparison of investor sentiment shows why this could become a problem. Right now there is a level of pessimism like in early March, when Dax fell to around 12,500 points, ten percent lower than the leading German index during the Handelsblatt poll on Friday and over the weekend. “It makes me think,” says AnimusX CEO. 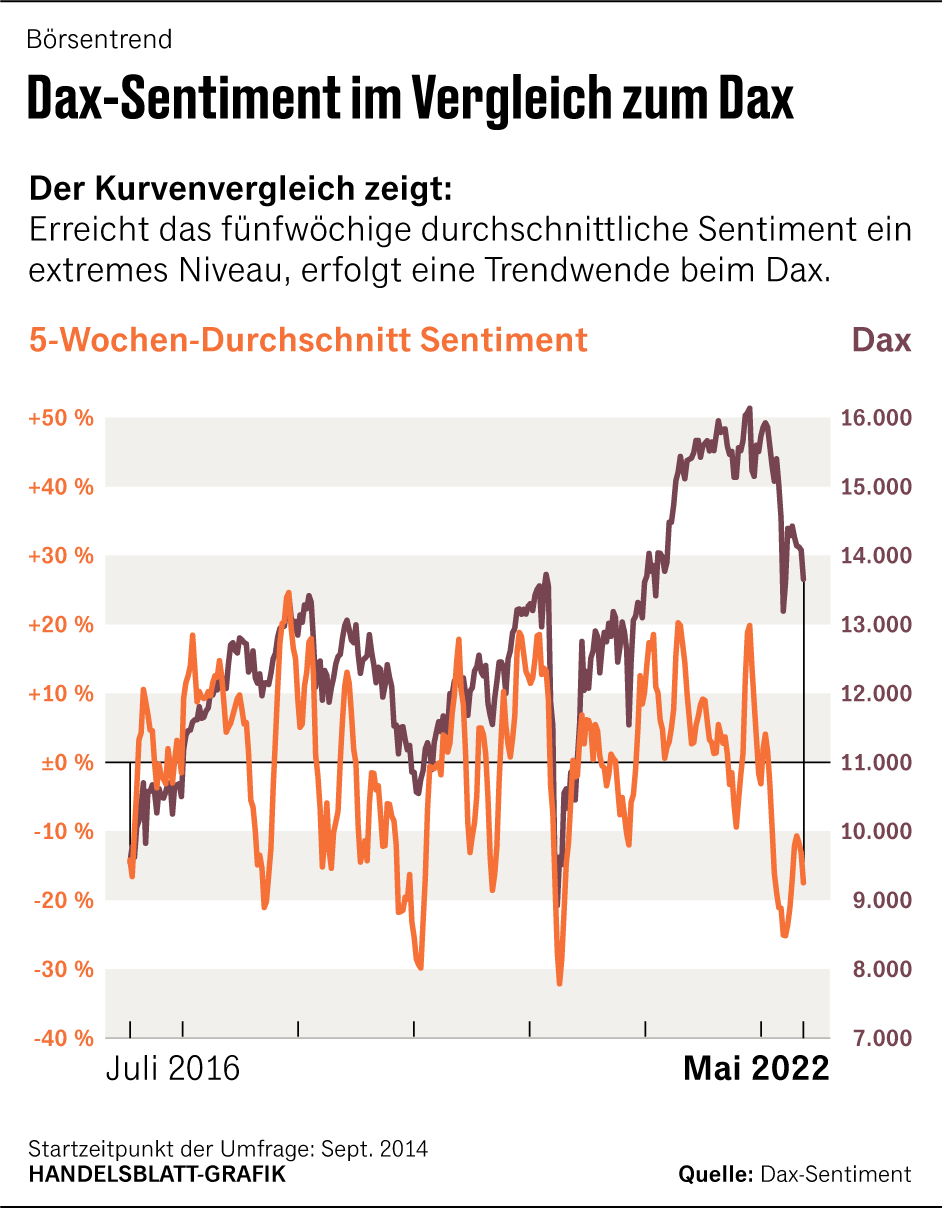 Because a constructive development would produce an opposite development. The scenario would be: Dax drops back to 12,500 points and investor sentiment collapses. However, not as strong as the first time. Emotional experts call this a habituation effect, a positive development.

But at the moment, the opposite is the case. Even a slight decline to 13,600 points led to a panic mood that may accompany the panic in early March. At the same time, many investors have bought shares, the investment rate has skyrocketed, and cash for further purchases is becoming scarce.

“Now there can be no more negative surprises, because there will be almost no support purchases,” Heibel explains. Investors hope that there will be no further escalation of the problems: war in Ukraine, inflationary pressures and corona lockdown in China.

In the absence of negative news, the technicalities of the markets are such that prices should correct simply because sales pressure is easing. But new sales pressure would now be countered by almost no purchasing power.

That the investor sentiment fell to minus 5.8 was due to the US Federal Reserve. Initially, investors were relieved when US Federal Reserve Chairman Jerome Powell said a 75 basis point rate hike was ruled out. But shortly after, the same statement caused a sell-off in the stock markets, as fears arose as to whether the central bank would be able to curb inflation at all.

The uncertainty is also spreading, the value has collapsed to minus 8.1. The last time there was so much uncertainty was at the beginning of the war in Ukraine. For Heibel, it is “astonishing that interest rate developments can have a similar impact on investors’ minds as a war”.

The future expectation remains negative with a value of minus 0.6, bears have dominated the floor for six weeks now. But the current price level in the stock markets is obviously already being seen as an access option. The willingness to invest has increased slightly to plus 2.0.

The euwax mood on the Stuttgart stock exchange, where private investors trade, has dropped to minus six. Investors obviously see no opportunities here, but continue to protect themselves against a continuation of the divestment. Negative values ​​indicate a surplus of put versus call products on Dax in private investors’ portfolios and vice versa. Institutional investors hedging via the Frankfurt futures exchange Eurex are now neutrally positioned.

The put / call ratio on the Chicago futures exchange CBOE rose last week. In the US, investors have apparently asked for clear hedging products such as put options that rise when prices fall. U.S. fund managers appear to have sensed the current divestiture correctly. Their previously low investment rate of just 46 percent rose to 57 percent last week.

The bull / bear ratio for US retail investors has fallen by 26 percent, indicating a clear overhang of the bears expecting falling prices. A share of 53 percent bears against only 27 percent bulls. However, the situation has changed somewhat compared to the week before, when some former bears joined the bulls.

The “fear and greed indicator” for the US markets, calculated from technical market data, shows moderate fear with a value of 31 percent. Extreme anxiety prevails from 25 per cent. Short-term technical indicators show an oversold market. That means: the indices have fallen too low too fast, and a counter-movement should come soon.

Do you want to participate in the survey? So let yourself be automatically informed about the start of the sentiment survey and sign up for the Dax sentiment newsletter. The survey starts every Friday morning and ends on Sunday afternoon.

More: Investors make these seven mistakes in times of volatility