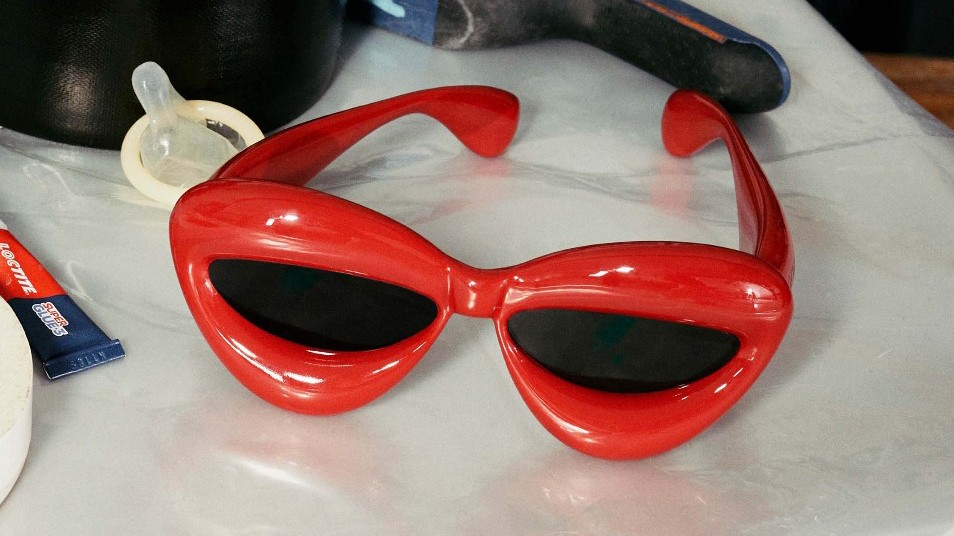 pffft! You’re hearing this noise a lot in vogue right now. Lots of air whizzes through super-sized balloon anoraks and into inflatable plastic vests that fill pneumatic Michelin Man looks. Handbags look like inflatable mattresses or armbands, and sunglasses like frames of half-inflated condoms tied together. Or like a squeaky dog ​​made of balloons sold at the fair. Apparently, fashion is really in the mood for air right now.

On the one hand, this is beautiful because the Pffft creates shapes that are voluminous yet elegant and light. Often, however, you have to make a double take to realize that it is actually fashion – and not something in the car (airbag), playground (bouncy castle) or nautical (hover boat). And do you have to wear something like that now? This brings us to the question of how seriously these designs are meant.

Very serious, at least for some. London-based designer Craig Green, for example, explained at the presentation of his men’s collection for autumn / winter 2022 that his design was inspired by a photo he had seen of a man living in an iron lung. The thought of being caught up in the head of a ventilator and kept alive is frightening, especially at a time when the coronavirus pandemic has drastically updated the fear of lung failure.

But Craig Green translates his inspiration into a look that does not look like the ICU, but rather great stupidity: His absurd sculptural plastic overalls look like an inflatable guest bed and hair dryer hood is cut apart, unfolded, laid on top of each other, then sealed again and forward became a confused model put into inflation. “I think it’s about lust and suffocation in a nice way. It probably turns into something sexual too,” the designer said quite cryptically in a Vogue-Interview.

A ventilation-fetish outfit in plastic, that is! By the way, this almost expresses the wonderful air quality: even though it is transparent and light, it still provides support and stability for all possible and impossible shapes – if you just compress them enough. Air can withstand a lot, it can act as an architectural support and support the statics.

Of course, no one would seriously go down the street with such a design. It is nothing new that there are often so-called concept designs in fashion, which are not intended to appear in stores in exactly the same way. All the ideas and thoughts that the designer dealt with in the design phase are concentrated in them in an exaggerated way. Such concept looks are usually excellent on social media, they gather hearts and likes and become viral hits. They are the best advertisement for other designs that seem like a less absurd light version of the concept and are actually sold. At Craig Green, these have been synthetic anoraks for a number of years. Rap stars Drake and Kendrick Lamar wear them, director Steve McQueen (“12 Years a Slave”) is also a fan: as if they were sewn from bicycle hoses.

“Actually, inflatable fashion should only be a short-term trend (…), but the truth is that it has not lost any of its relevance for several years. In dog years it is decades, and in fashion years? An eternity.” The magazine wrote a couple of weeks ago The face in an essay entitled “Why Are We So Obsessed With Inflatable Fashion?” (Why are we so obsessed with inflatable fashion?). The occupation is also reflected in the fact that jackets and coats with thicker and thicker padding have dominated winter fashion for years. Now they look more like portable hot air balloons or hot air balloons (even though they are still filled with down).

This is also reflected in the fact that an inflatable plastic vest that designer Virgil Abloh designed for Louis Vuitton last year (price: almost 4,000 euros) created an unparalleled hype in China. It was sold out in no time there, and while Chinese social media stars strutted around with it, others made the vest themselves – from ordinary bubble wrap, like the one you pull out of a box when unpacking, or out of an empty chip poser. It was not always clear whether these people wanted to mock the hype around the West. The magazine Women’s clothing daily got a few votes on the Chinese social media platform Xiaohongshu: “As someone who earns 1,500 yuan (about 212 euros) a month, this vest makes me question the meaning of life,” wrote one user. And another user asked, “Does that keep you warm at all?”

One could now go so far as to read airy fashion as a sign of the times. A very expensive item filled with nothing. Does it not fit into an economy whose values ​​sometimes seem almost intangible? Economists keep warning that the bubble is bursting. And some highly traded equity portfolios disappear into thin air from one day to the next. Perhaps such an interpretation is inflated in the true sense.

In sportswear, on the other hand, air damping has been so common for decades that one hardly thinks about it anymore. Especially in the luxury segment, people have benefited in recent years from taking impulses from this industry. Nike has been selling its shoes with “Air” technology since 1987, ie with encapsulated air in the sole. Reebok countered a little later with the “pump” technique; With these, the tongue and later also the shaft of a sneaker could be filled with air cushions to enclose the foot even more precisely.

Lots of air in the shoe: it’s hard to imagine sportswear without

For several years now, the “Boost” soles from Adidas have been state of the art in damping technology. They consist of expanded thermoplastic polyurethane, ie plastic particles foamed with air, which are welded together with the supply of hot steam. The high-tech material is similar to styrofoam and is almost as light. It is, among other things, in the soles of the popular Yeezy sneakers. Their design is more and more reminiscent of the air cushions that hovercraft boats sail on. On the one hand, air is used here in a very functional way, it optimizes the technology, on the other hand, it also shapes the aesthetics.

In other words: Once you get used to always walking around so soft and airy, you can clearly find it at a time when wearing comfort is contagious to other things in the wardrobe – vests, sunglasses, handbags – and they also see more out. and more pumped up.

At least the wildly successful “Padded Cassette” bag from Bottega Veneta also looks very pumped. Launched in 2019, it feels as if the brand’s distinctive intrecciato leather weave was left to artist Erwin Wurm, famous for its bulging sculptures. And as if he had made the leather straps swell up, as he usually does in his art.

French designer Simon Porte Jacquemus also spices things up. He recently unveiled his new summer collection “Le Splash” on a beach catwalk in front of Hawaii’s South Pacific panorama. Also included: Bags resembling halved air mattresses that you store under your arm. And: pockets that mimic the look of bulging swim sleeves. Maybe you can put some cash, sunscreen and a cell phone in them? It is certainly not meant to be taken seriously, nor is it really practical. But: It conveys a great desire for vacation, snorkeling, bikini stripes.

And then there’s Jonathan Anderson. The British designer put the surreal crown on the trend, if you will. In his Loewe collection for the upcoming fall / winter season, he sticks balloons in the slits of dresses or sticks them under pumps like heels. Of course, these are not real balloons, in art it would be called trompe-l’oeil, creating an optical illusion. One will almost reach out with the needle and see what happens. Jonathan Anderson says of the collection: “A balloon creates excitement. It will burst.” And you think about that when the models step on the balloon heels.

“Bang” does not do it anyway. But it is a good reminder that any fashion trend will at some point lose its breath. That is for sure.