The open structure of the “C1 Building” by Architecture 00 stands out in the stimulating, seemingly random chaos of the new creative district of Greenwich: Many of the uses were arranged in front of the thermally efficient building shell, thus enlivening the public space as well.

Architecture 00’s robust three-storey C1 building is housed in an architecturally challenging environment. The Greenwich Peninsula has not been used as a location for London’s gas refinery and production since the 1980s, and since then master plans for the area have been repeatedly drawn up. The Millennium Dome designed by Richard Rogers, now called ‘The O2’, is famous. Rogers also dived into a master plan that included concentric rings of mixed-use buildings. The plan failed, and a whole host of other urban planning ideas have been developed and rejected to this day.

When developer Knight Dragon acquired the area in 2013, its city plan, developed by architects and city planners Allies and Morrison, included rows of high-rise buildings on the east side and blocks on the west side of the peninsula.

Building C1 was built by developer Knight Dragon as the cornerstone of a completely creative district in the middle of the peninsula. However, it was initiated and run by the Greater London Authority, which also retained part of the site: Mayor Sadiq Khan took the opportunity to tackle the problem of the expulsion of small, thriving creative businesses from other parts of London.

Regardless of the neighbors

How to create a design district from scratch? The result is a “village” consisting of 16 buildings spread over five farms and offering a total of 14,000 m² of commercial space. Eight different designers, selected by architect Hannah Corbett – master planner and design coordinator for the project – each designed a few buildings. Each plot was designed blind, i.e. H. without reference to the architecture of the respective neighboring property. This is a remarkable idea and unprecedented by Western European standards. It is more reminiscent of East Asian developments such as South Korea’s Paju Book City, which opened in 2003, although it was built in stages. Most amazingly, the Greenwich Design District actually works, while at the same time being stimulating and entertaining.

Architecture 00’s C1 building is a good example of this approach, although it is not the first of its kind. It forms a transition between the O2 dome, which is a massive end to high-tech architecture, and the Design District’s detailed but all the more dynamic eclectic aesthetic. It looks like a simple building, abandoned by a structure made of galvanized steel, over which some steel cables are stretched. These, in turn, have a mesh made of stainless steel that encloses the entire structure made of reinforced concrete and glass. The steel cable and mesh frames are reminiscent of Cedric Price’s idiosyncratic aviary at London Zoo in Regent’s Park from 1965, a forerunner of the high-tech movement.

But the C1 building also has a relaxed metropolitan component: There is a basketball court on the roof whose ball net is reminiscent of the chain fence at an urban sports venue in the United States. The load-bearing structure of the metal mesh with its 12 thick, galvanized steel supports not only characterizes the building itself, but also marks the entrance to the entire Design District. In addition, she refers to the architects’ openness to changes and the unplanned during the construction process. Lynton Pepper, one of Architecture 00’s partners, explains: “The steel columns are actually quite massive because the engineering engineers said they did not know what the load would be, so they had to dimension them very heavily.”

But the massive steel construction also has an aesthetic impact that underscores the robustness of the building and provides a stark contrast to the nearby 3D-modeled luxury skyscrapers and the screaming facades of nearby Ravensbourne College (Foreign Office Architects, 2010). Instead, the C1 Building is consistently defined by the aesthetics of the steel structure, the metal mesh and the cantilevered concrete floors. The latter is also the key to this project. The designers of Architecture 00 are experts in the design of office space and have already published two reports on the design and financing of the new typology, which was also used in C1 Buildung: they have optimized the ratio between usable area and gross floor area of ​​the building to maximize rental space. . Therefore, only the rented area is thermally insulated. Exterior floors are a novelty in London office buildings, though they are common in public housing. In the C1 building, they are used to access the upper floors and to connect the individual floors with the function rooms on the south side. This solution may not be quite as comfortable in the winter, but it offers home users areas to socialize. Lynton Pepper says that Architecture 00 had long wanted to use this “cover and mesh” strategy, but it is only now that the Design District has finally implemented it. If you are in one of the outlying areas behind the net, you can easily talk to passers-by on the street below. Thanks to the mask, the glazed façade is not disturbed by a balustrade, just as the interior appears larger and moves closer to the busy public urban space.

However, the success of the project is not only due to the big decisions. Only a few smart outline modifications of the floorboards to each other z. B. ensure vertical development. The outside areas are widest up to the basketball court on the south side. Here is also the main staircase, whose impressive weight required an extra ‘strong’ steel girder between the ground floor and the first floor. On the north and east side, the outdoor areas on the upper floors are adapted to the fire safety regulations, so that the basketball court has two entrances and events can be held here.

The neighborhood instead of halved

The interior is kept simple. While the customer initially wanted the floors to be able to be divided into two areas, Architecture 00 eventually implemented them as four separately accessible and technically equipped areas based on their experience with other office projects. The south façade, where the externally accessible toilets and the kitchenette are located on each floor, is provided with solid polycarbonate panels that ensure a certain degree of shielding. In general, the materials are simple and the finishes are attractive. However, it’s a bit of a shame that the quality of the concrete on the ground floor ceiling does not quite match the rest of the building: This is the disadvantage of a prototype, because the C1 building was the first of the 16 buildings in the design district to be completed by the turnkey contractor. “We wanted it to be a place where you could use a buzz saw,” Pepper says, and the house certainly has a relaxed but also hip vibe.

The C1 building is a resounding success, serving not only alone but also as the gateway to the Design District, home to buildings by Barozzi Veiga, Selgascano, 6A Architects and other UK architectural firms. It suggests the purpose of the neighborhood as a place of creativity, not through dazzling materials or sculptural roof lines as seen on some neighboring buildings, but by presenting itself as a platform for activity. Architecture 00’s experimental approach to the construction process fits in very well with London’s new typology of creative spaces. One could wish this would work for their larger ongoing project, the £ 18m National College for Digital Skills elsewhere in London.

Translated from the English by Martin Höchst 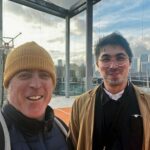 our critic Tim Abrahams (here on the left in the picture with architect Lynton Pepper at the agreement in Greenwich) convinced u. a. Opportunities for appropriation that C1 The building’s open building structure offers its users. 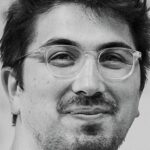 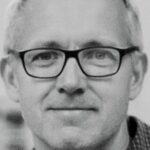 Releases e.g. for the EU, Domus, the Prince’s Fund. Publications on architecture, urban planning and design in, among others, The Economist. Special articles for ICON Magazine. Publishing advice for design studios.