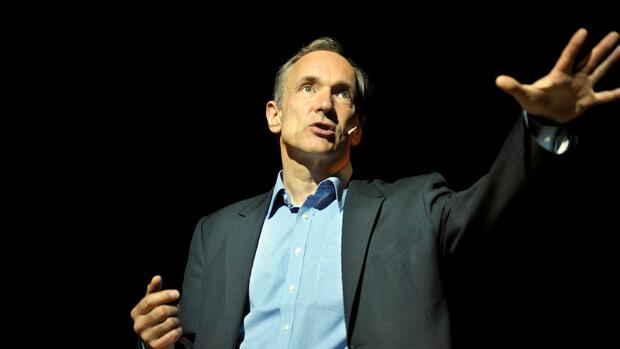 Düsseldorf, Frankfurt Tim Berners-Lee, 66, represents just another preliminary highlight of the NFT boom. These “non-fungible tokens” are a method of adding a signature to files and making them unique. The founder of the World Wide Web (WWW) gave his original program code to the web such a signature, turned it into an NFT and got it auctioned off at Sotheby’s. In the end, the lines written by Berners-Lee in 1990 were worth $ 5.435 million to a bidder Wednesday night, according to Sotheby’s.

NFTs are growing in popularity and have now grown into a multi-million dollar market. 51 bidders participated in the current Sotheby’s digital auction; the proceeds go to the initiatives that support Berners-Lee and his wife Rosemary.

For sale were the 9555 lines of code, including the implementation of the HTML (Hypertext Markup Language) programming language, also invented by Berners-Lee, and the HTTP (Hypertext Transfer Protocol) transfer protocol. Part of the package was also an HTML document with instructions for using the new software.

As world-changing as the World Wide Web was and is, as respectable as the price of this non-fungible token is: it is overshadowed by the astronomical $ 69.3 million that Instagram-Artist’s Beeple redeemed at Christie’s. Canadian artist Grimes sold digital assets for $ 5.8 million. And after all, Twitter boss Jack Dorsey was able to redeem $ 2.9 million for an NFT certificate for his first tweet.

The technology behind the NFTs comes from the world of cryptocurrencies because they are also based on the blockchain, ie the digital infrastructure that Bitcoin, Ether and Co. Like Bitcoin, NFTs are digital assets – but while one Bitcoin is like another, NFTs are based on the premise that each token is unique and immutable.

So unlike tokens, which can be created in large numbers, these are unique one-time services. Although they can be bought and sold, they are basically not changeable, eg by division.

NFTs are exciting for the creative industries

An NFT stands for a digital asset, but the digital tokens can also be seen as proof of ownership of virtual or physical assets. For example, rare sneakers or stocks in luxury goods like watches are popular.
The value of an NFT lies in its unique character. That is why it is used in digital art, for example. Another example is digital football trading cards: Users can buy and sell them or exchange them with each other. At the same time, they are unique or only available in limited editions.

From a technical point of view, NFTs are attractive because they define originals of copyable, only digitally existing works of art or, for example, pieces of music and thus can make them salable. But you can also document ownership rights to physical items electronically.

NFTs are exciting for the creative industries because digital artwork secured with NFTs does not change hands via download or on a USB stick. Instead, they are stored on the blockchain as so-called tokens, equivalent to a cryptocurrency. The owner of the token owns an original, although identical copies can also be seen outside the blockchain.

This means that digital art can also be traded online in a counterfeit-safe way – and artists who issue an NFT can do without intermediaries and platforms that would traditionally share in the profits and often even claim copyright.

And NFTs are also interesting from an investor’s point of view because they represent a whole new asset class. The market for this is growing: According to estimates by the French bank BNP Paribas, the market value of global transactions involving NFTs has almost quadrupled since 2018 and amounted to about $ 340 million in 2020. The bank describes the estimate as “conservative”, and they record amounts traded so far this year are not yet included.
NFTs became known for the first time in 2017 with the so-called “crypto kitties”, ie “crypto kittens”, where players can buy and sell different types of virtual cats, but also collect and breed them. The game was the first common use case for the Ethereum blockchain.

Mike Winkelmann alias Beeple, Claire Elise Boucher alias Grimes or Twitter founder Jack Dorsey – they all had success with their NFTs. Mike Winkelmann, who gave himself the artist name Beeple, shot the bird off.

The digital artist Beeple has auctioned off his digital diary

The NFTs rocked the art market a lot in the spring of 2021. No one had the top prize of an incredible $ 69.3 million for Beeple’s Everydays: The First 5000 Days. This means that the Instagram artist’s digital diary, whose real name is Mike Winkelmann, has become more expensive than the best gifted works by Gerhard Richter or Jeff Koons. Crypto-entrepreneur Vignesh Sundaresan, who lives in Singapore, bought the work, which is aesthetically rooted in the gamer scene, at Christie’s.

Due to the extreme increase in the value of ether, a number of people have become millionaires and billionaires in cryptocurrencies. However, the new wealth is difficult to convert into dollars. As art is also a good medium of exchange, many liquid cryptocurrencies are currently flowing into art. However, at prices well below a tenth of the Beeple record.

One of 10,000 algorithm-generated pixel figures, Larva Labs’ CryptoPunk # 7804, has been auctioned for $ 7.5 million. Originally, a few thousand of these pixelated crooked characters were given away for free. In the crypto community, however, CryptoPunks enjoy cult status and are traded as blue chips.

The hype surrounding NFTs and fast money has even gripped the old masters. The Uffizi Gallery in Florence now sells NFTs of well-known and popular masterpieces such as “Digital Art Work” together with the company Cinello. To exclude free riders, each buyer receives a certificate of authenticity, personally signed by Eike Schmidt, the director of the Uffizi.

The Canadian artist Grimes is actually named Claire Elise Boucher. The 33-year-old from Vancouver is not only a singer and songwriter, but also produces his own music, illustrates his own album covers and a large part of his music videos. Her style encompasses a wide range of approaches, combining electronic music with experimental pop, synth pop and RnB elements.

In late February, the video artwork titled “Death of the Old” raised $ 398,000 at an online auction. The Canadian, partner of Tesla CEO Elon Musk, cashed in about $ 6 million in just one weekend with various digital works of art she herself created.

She created the auctioned collection with her brother Mac Boucher under the name “War Nymphs”. This is a series of video clips, animations and digital paintings combined with their own music. The Nifty Gateway website served as a sales platform where interested parties could buy or bid on NFTs.

Grimes chose the auction format for “Death of the Old,” but she used the opportunity to sell many of the other works of art. Two animated images called “Earth” and “Mars” were offered for $ 7,500 each, and up to 9,999 copies of each image were sold, of which she sold 300 to 400 each.

She also sold a number of paintings from the Newborn series, 100 of which sold for $ 20 apiece. Two other paintings went under the hammer at a silent auction. In this format, the participants in the auction submit a bid, and the ten highest bidders are each awarded a copy. Prices up to $ 111,000 were occasionally offered.

In March, Twitter founder Jack Dorsey hosted yet another eye-catching NFT auction. The American entrepreneur, who is also the founder of the payment company Square, auctioned off a digital version of his first tweet in the form of an NFT for $ 2.9 million. Dorsey wrote the tweet “just setting up my twttr” in 2006 and it is now writing internet history again in the form of an NFT.

The buyer of NFT is Sina Estavi from Malaysia, head of blockchain company Bridge Oracle. According to the industry, he paid after the auction in the cryptocurrency Ether. The tweet was auctioned off via the digital platform Valuables by Cent.

However, Dorsey did not keep the proceeds of the auction: Shortly after the auction, Dorsey tweeted that he would exchange the proceeds for Bitcoin and donate them to the charity Givedirectly’s Africa Response, which raises money for African families financially affected by Corona. virus-Pandemic suffers. The total amount at that time was 50.8 Bitcoin. However, that only equates to 95 percent of the selling price, five percent went to the auction platform.

It was first announced in February that the Twitter boss would start a Bitcoin fund alongside musician Jay-Z, whose real name is Shawn Corey Carter. The two invested a total of 500 Bitcoin in their new fund called Btrust, which aims to contribute to the use and development of Bitcoin, initially in India and Africa.

In early June, Dorsey reiterated her enthusiasm for the digital currency Bitcoin and the technological developments behind it. As Dorsey said at a conference in the United States: “Bitcoin is changing absolutely everything.” And: “I do not think there is anything more important in my life to work on.”

More: Social tokens promise their users access to social networks or exclusive meetings with stars. What potential lies behind – and what risks lurk.