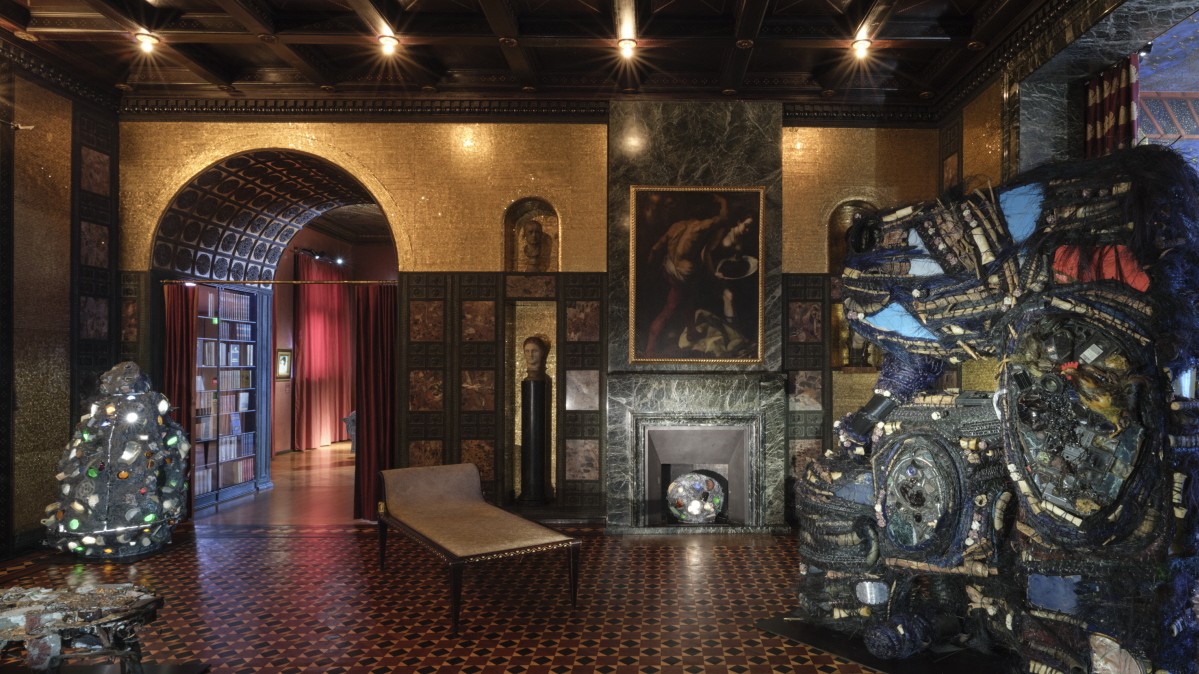 Wow, what is it about a colorful, crazy, fabulously bubbly and at the same time sociopolitically profound world that Misha Kahn kidnaps us into at Villa Stuck? Anyone who, with astonishment, rubbed their eyes over their furniture and objects made of found and transformed material at the design fair in Miami last year, where the then 32-year-old received the award for “Best of Show Contemporary Work 2021”, can now go for a bath in abundance of ideas. The monstrously funny structure that inflates the study terrace with the same naturalness that the larger copies of old statues occupy the ceiling alone is a promise that is best seen from the opposite side of the street.

The course of design pieces and works of art that Misha Kahn, with the curatorial support of Kellie Riggs, then created in the new Villa Stuck exhibition entitled “Under the Wobble Moon. Objects from the Capricious Age” is wonderfully entertaining. And is always in dialogue with the architecture, furniture and works of art by Franz von Stuck. Therefore, it was often already clear to the museum staff where the objects were to be placed when they were unpacked. For not only objects from the last seven years are displayed. Kahn created about half of the exhibits for the rooms in Villa Stuck. This is how the most comprehensive exhibition to date with works by Misha Kahn and the first in Europe emerged.

He saw a certain parallel between the landlord and himself, says Misha Kahn at the preview of the association. The painter Stuck, who also became an architect and designer during the construction of the villa. He, the designer, who now also works as a painter. And in fact: Unconventional collected works of art are inherent in both. Wearing a medieval, antique pink top made of something resembling suede and reaching down to his knees, on his feet light, bulging slippers that could have come from a 3D printer, he stands quite shyly in the middle of amazed listeners, as he tells that. Eventually he allows himself to be persuaded to lead through the show himself, opens a hidden door on a drum in the reception room, points to the revealing underside of a chair on a mirror base in the smoking room, turns one of the jewelry in the music room and its embedded gemstones, so how you shoot through the winding corridors of a pinball machine, or – the advantage of the preview – let the guests touch individual objects to experience the feel of the materials.

Which turns out to be particularly surprising with the wall objects in the smoking room, for example. The fork-shaped red tongue in the grotesque structure of the wall feels like a hot silicone bulge that makes it appear even more vibrant. But the table in the dining room with its biomorphic pendant is also annoying as it is made of plastic but feels like ceramic. Visually, Kahn creates impressive parallels, for example, by placing a figurative sculpture, which is actually a lamp, next to the Guardian of Paradise, so that both act as brothers in spirit.

Born in 1989 in Duluth, Minnesota, Kahn attended the Rhode Island School of Design and graduated in 2011 with a Bachelor of Fine Arts degree in furniture design. He is known for pushing boundaries and challenges conventional notions of design as well as manufacturing methods and reinvents himself almost constantly. He uses plastic, metal, glass, wood, textiles, ceramics, cast bronze, fiberglass and cement for his art, jewelry and design objects. The mix of materials is as varied as its effect is surprising. He combines traditional craftsmanship with the most modern techniques as a matter of course. His desire to experiment seems unlimited, but he also works with master craftsmen to learn and understand. This is how Kahn’s highly acclaimed “Woven Scrappy Series” (since 2015) was created in collaboration with Gone Rural, a group of traditional weavers from Swaziland. The motif of the tapestry on display in the old studio is extremely modern and appears to be woven from an augmented reality template. And when it comes to jewelry and watches, he also relies on fixtures in the respective disciplines in addition to design.

Placed at the interface between design and art, Kahn creates a “metavers” in which things play a major role that others throw away. He gathers, processes, and refines them, appropriately attuned to our age, which he calls a whimsical one. If you go deeper into Misha Kahn’s world of thought, you will encounter a network of relationships between humans and nature, technology, age and themselves. It is not a must, but an absolute plus, to download the so-called audio guide on the website Villa Stuck ( available in German and English). Whether it’s a waste or food problem, exploitation of nature or a climate disaster, self-optimization, industrialization or digitization – Kahn and Riggs have not designed an art history guide through the exhibition, but have designed a literary booklet in audio format that you can listen to on site , as if you were at home. And where such big terms as “particle formation” or “shaking process” occur.

In general, the overall picture is characterized by a huge dose of wit and irony, and you can hardly imagine what it is like at home with Misha Kahn, who by the way is located in Brooklyn. The exhibition itself goes through the historic rooms on the ground floor, goes through the old studio on the top floor to the former private rooms and ends in the artist’s garden where there are some sculptures and a robot, sorry “Automatic Worker” called “Røbopièrre”, which was used during the exhibition period make paintings. For the fact that the artist also defines the painting process a little more untraditionally than others, should not come as a surprise after a tour of Misha Kahn’s metavers.

Misha Kahn: “Under the Wobble Moon. Objects from the Whimsical Age”, Villa Stucco Museum, Prinzregentenstr. 60, can be seen until August 21st