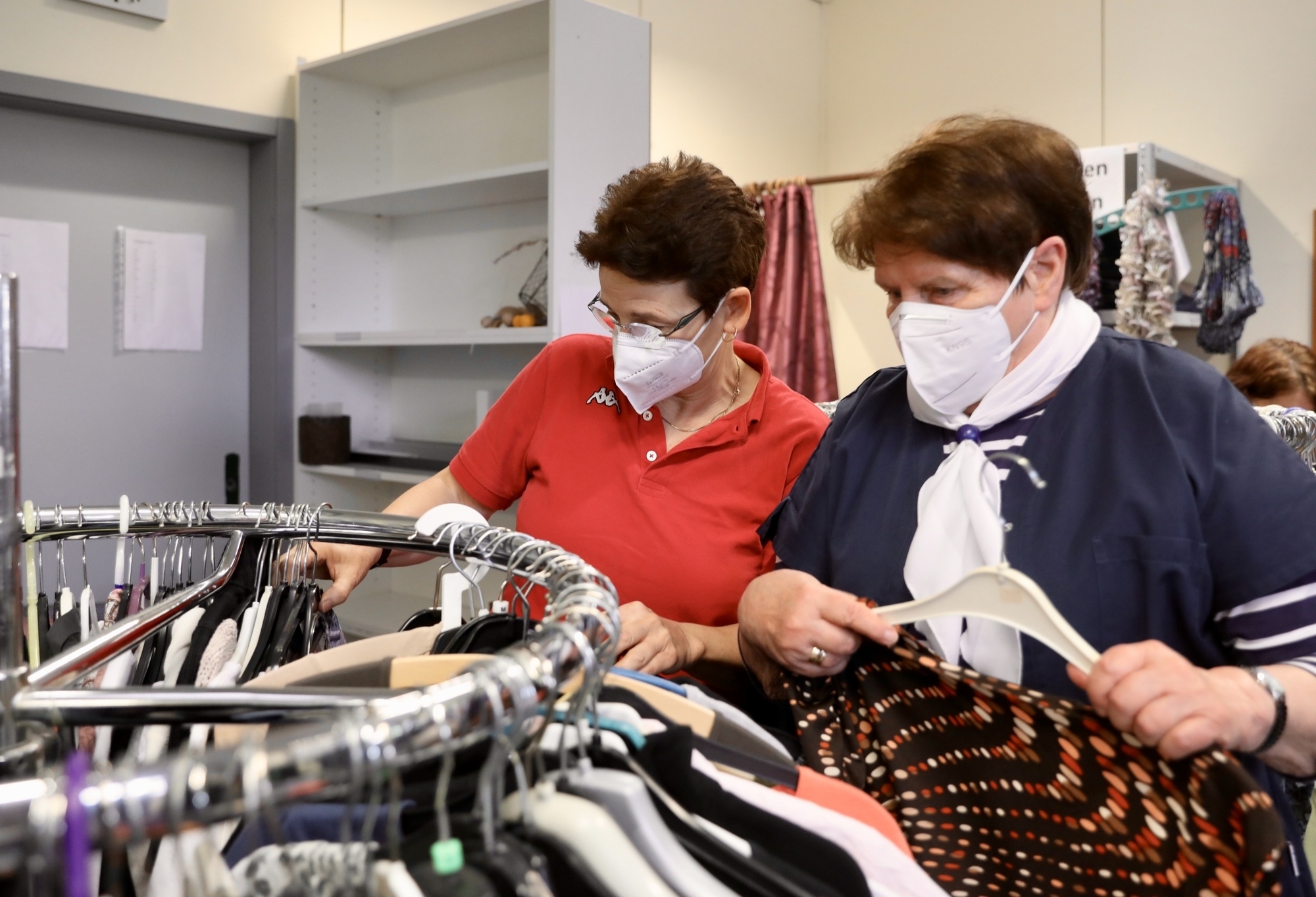 The German Red Cross (DRC) has already supplied hundreds of people fleeing the war in Ukraine with clothing in its clothing stores in Winnenden, Schorndorf and Backnang. There is a great deal of volunteer work behind this help. In Winnenden on Wiesenstraße, Gaby Sauer and her nine colleagues (at least one man is there to carry boxes, as the 56-year-old says) run the shop. The donated clothes are stacked up in several rooms – and yet it is stuck in some places.

“It would be nice if we got more children’s shoes,” says Gaby Sauer, and clothes in general for children and young people between the ages of 10 and 16. Most of what is handed over in the locker room of the former notary’s office is for adults. Children’s clothing is often sold in bazaars. But right now, with the war raging in Ukraine, many mothers with children are coming to Wiesenstrasse. On this day, for the first half hour, three Ukrainian families dressed Gaby Sauer and her team.

“Ukraine refugees very often come with the Germans who have taken them in,” says Winnender native, who has been involved with the German Red Cross since she was 14 years old. The refugees get the first equipment for free. The city, the district, volunteers help with the mediation.

Other purchases are affordable: T-shirts, sweaters and pants cost one euro, jackets cost three euros. Bed linen is weighed, 50 cents per. kg. Customers do not need a voucher, such as at the food bank. “Basically, anyone can shop here,” says Gaby Sauer. Except in special cases where a house has burned down or people in the hospital are in dire need of fresh clothes, the target group is “people who cannot afford to change clothes on a regular basis”.

Open every Monday from 9.00 to 11.00 and every first and third Wednesday

The deputy social leader in DRK, who works full time at a hospital, is an active on-call guard and is also involved not only in the clothing store, but also in the elderly movement, knows about the great need for clothes at affordable prices.

The clothing store in Wiesenstrasse is open every Monday from 9.00 to 11.00 and every first and third Wednesday of the month from 17.00 to 19.00. The volunteers send about 60 to 100 items over the counter at each appointment. While Gaby Sauer shows up, people are queuing up in the hallway in front of the clothing store. In the sales room, young women and their children look at pants, sweatshirts and the like.

Gaby Sauer is convinced that demand will not fall. She refers, among other things, to the price increases on food: “People will no longer be able to spend that much money on new goods in the future.”

In addition to the current large number of people from Ukraine – Gaby Sauer experienced the same thing with the refugees from Syria in 2015 – there have been numerous regular customers in the clothing store for years. Most of those in need, though not all of them, Gaby Sauer notes, have a migration background.

Before the ladies from DRK send the clothes over the counter, a few steps must be taken: First, the donations are received. Gaby Sauer and her team often receive large, heavy boxes if, for example, the clothes come from a household outlet. The pandemic also provided plenty of supplies: “During the Corona period, when we were all at home, it was cleared out,” the 56-year-old says. In Wiesenstraße, the clothes are sorted by type and size, winter and summer clothes.

Rule of thumb: Donate only what you would buy yourself

Many things then have to be fixed completely because they no longer live up to the quality standards. According to Gaby Sauer, the rule of thumb for clothing donations is: “You can donate what you yourself would be willing to buy.”

The DRK woman encourages the Winnender residents to do this – because what is delivered in the clothing store, in contrast to, for example, used clothing containers, benefits the locals directly. Doing good also makes donors happy, as Gaby Sauer knows. “I’m happy when I see my clothes again somewhere in Winnenden,” a customer recently told her.