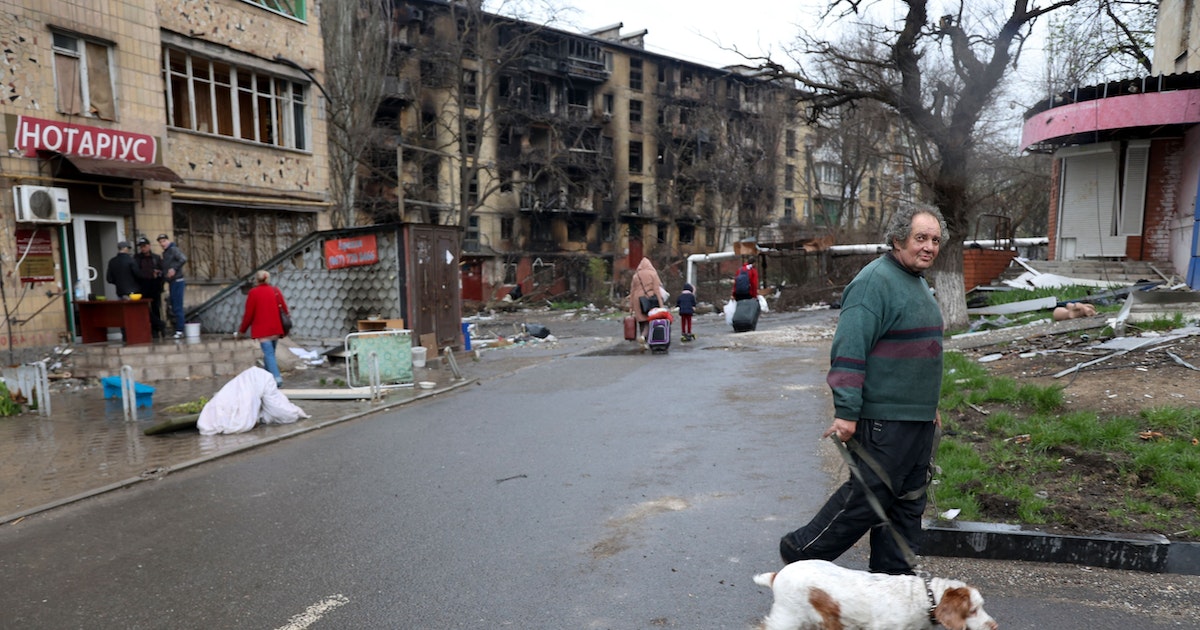 In light of the intensified Russian attacks in eastern Ukraine, the Western allies want to increase their military and economic assistance to Kiev again. This was agreed on Tuesday at a video conference by US President Joe Biden with European partners, participants said. Meanwhile, the situation in eastern Ukraine continued to deteriorate, especially in the fiercely disputed port city of Mariupol.

The Ukrainian troops still holding out there described their situation in dramatic words early Wednesday morning. “We may be facing our last days, if not hours, here,” Navy Commander Serhiy Volyna said in a Facebook video. “The enemy surpasses us with a ratio of 10: 1.”

The Ukrainian soldiers in Mariupol had entrenched themselves in a steelworks and from there offered fierce resistance to the Russian invaders. According to Regional Governor Pavlo Kyrylenko, street fighting in the city continued on Tuesday.

The Russian leadership announced a “new phase” of the military operation in the neighboring country and urged the Ukrainian troops to surrender. According to the government of Kiev, Russia has launched its long-awaited major offensive in eastern Ukraine.

During the consultations between the Western partners, it was agreed to further increase the economic pressure on Russia and provide more support to Ukraine. “We will continue to tighten our sanctions against Russia and increase our economic and security assistance to Ukraine,” EU Commission President Ursula von der Leyen wrote on Twitter.

The United States is preparing an aid package

According to US information, Ukraine has already received fighter jets. Pentagon spokesman John Kirby said Ukraine now has “more fighter jets than two weeks ago.” “They received additional aircraft and aircraft parts.” However, Kirby did not provide further information about their origin or design.

Ukrainian President Volodymyr Zelenskyy has asked NATO to supply fighter jets. In the room was the handover of Soviet MiG-29 fighter jets, on which Ukrainian pilots are trained. Several Eastern European states have MiG-29 jets.

According to the media, the United States is preparing another $ 800 million (741 million euro) military aid package to Ukraine. According to NBC News, the new supplies of aid are expected to include artillery and tens of thousands of grenades.

The Russians are appealing to the Ukrainians to give up

Following the video conference with the partners, Chancellor Olaf Scholz (SPD) announced that if Eastern European NATO partners would supply Soviet weapons from their old warehouses to Ukraine and then “provide replacements” for themselves, Germany would be “helpful”. However, he rejected calls for the delivery of tanks from Bundeswehr warehouses to Ukraine.

The Russian Defense Ministry on Tuesday appealed to the Ukrainian armed forces to surrender “immediately”. According to Russian side, they opened a corridor that would allow Ukrainian soldiers to flee Mariupol. On Tuesday night, however, the Russian army lamented that “no one” had used this escape route.

The battle for Mariupol continues

The Ukrainian commander Volyna in Mariupol, meanwhile, appealed “to all world leaders to help us”. They should get the Ukrainian soldiers out and take them to a “third country”. The Azov-Stahl plant, where the Ukrainian soldiers were encapsulated, has several underground tunnels. According to the city council, there were also more than 1,000 civilians.

Taking the strategically important port city of Mariupol would allow Russia to establish a corridor to the Crimean peninsula, annexed in 2014. Also in other parts of eastern Ukraine, Ukrainian troops fought against the Russian advance. The Ministry of Defense of Kiev said that a counterattack on Russian troops near the small town of Marijnka inflicted these losses.