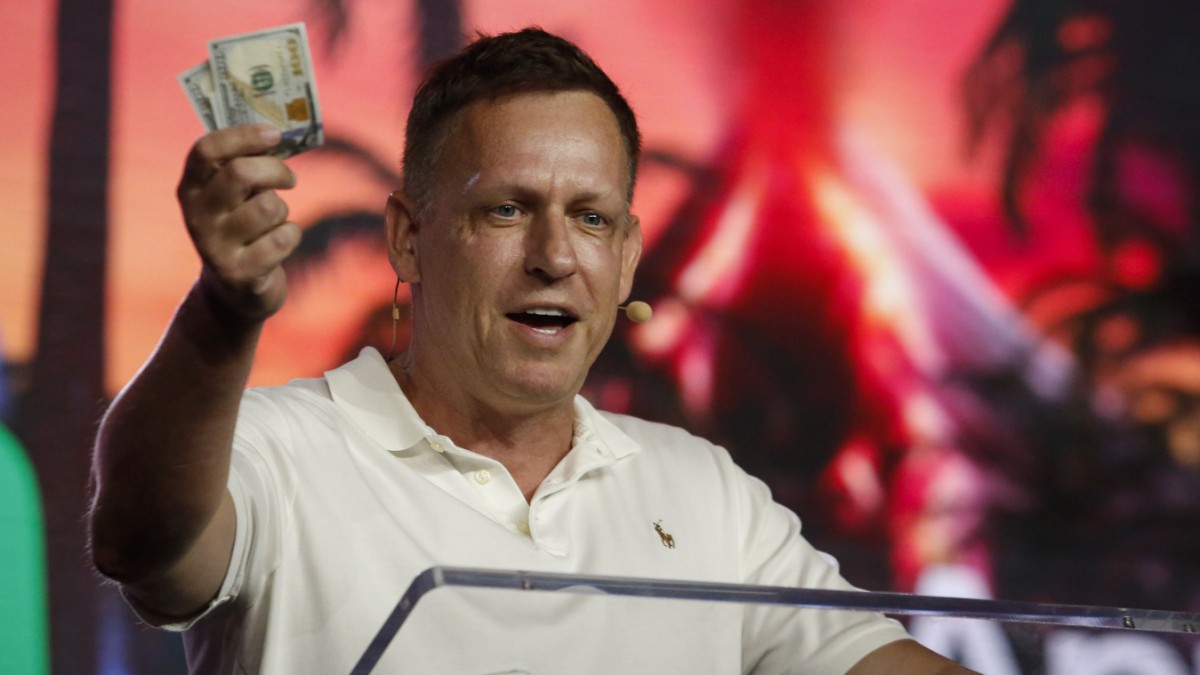 Peter Thiel brought what he called an “enemy list” when he spoke at the Bitcoin 2022 conference in Miami Beach on Thursday. “We will expose them!” the technology investor promised the assembled crypto fans.

He then faded a picture of 91-year-old investor Warren Buffet in his presentation. The “sociopathic grandfather,” as Thiel called him, has repeatedly expressed skepticism about Bitcoin and other cryptocurrencies. Also on the list were 66-year-old Jamie Dimon, head of the largest U.S. bank JP Morgan Chase, and 69-year-old Larry Fink, who runs the world’s largest asset manager Blackrock.

This “financial gerontocracy”, which refuses to move its capital to the crypto market, is to blame for the fact that Bitcoin still has not broken the $ 100,000 threshold. He called companies that invest on social and ecological terms “hate factories” against Bitcoin. Thiel also attacked the central banks because, in his view, they did not focus sufficiently on crypto-technology. Bitcoin’s rise in value over the last few years “shows us that central banks are bankrupt.” The end of the current monetary system is near.

“It’s a revolutionary moment,” Thiel said. “We have to get out of this conference and take over the world.”

Crypto has become a matter of faith

This speech by one of the most influential businessmen in the world, hovering between motivational power talk, conspiracy whispers and political agitation, will probably go down in history as one of the highlights of a cultural war that is currently building up within technology and finance. industries. Crypto yes or no, for many people it has long since ceased to be a question of what opportunities they calculate the technology to have, it is no longer a matter of weighing opportunities and risks – it has become a matter of commitment . Hence the attempt at this point to sort the fronts.

In the right corner of the ring stand people like Peter Thiel. The 45-year-old is considered a pioneer in technophile ultraliberalism: Technology must liberate the world, above all from the state. He dreams of overcoming mortality and autonomous colonies on artificial islands in the sea. Judging by various statements, he sees democracy as a danger to capitalism. One of his first means of enforcing this ideology was Mark Zuckerberg, in whose Facebook platform he early put in half a million dollars to later sell the shares for a billion. Then he supported Donald Trump’s presidential campaign. Meanwhile, in addition to his continued commitment to Republicans, he has apparently found an even more promising vehicle: the crypto-technology behind Bitcoin.

It must help to establish economic circuits and financial flows without central, controlling bodies – without banks, audit firms, possibly also without authorities. Everything flows by itself, instead of people, computer codes make sure that the rules are followed.

The whole world should become a stock exchange

In the left corner of the ring there is growing opposition to this idea – which now explains the rhetorical intensification to the right. Initially, many critics of capitalism were also enthusiastic about Bitcoin. It ended up going against the banks. Meanwhile, the idea of ​​a whole new internet, called Web3, which is less digestible for them, has triumphed, where everything, to put it simply, should function as a cryptocurrency: images, videos, music, companies, rights – whatever can be represented digital, should be registered as digital property and at the same time become marketable after being converted to digital coins. Kind of as if the internet and the world represented in it became public as a whole. An automated exchange. If rules are written by big crypto investors like Peter Thiel.

Twitter founder Jack Dorsey ventured out of the deck last December. The often repeated promise that everyone would benefit from this super-exchange listing because everyone could then buy coins is not true, he wrote on Twitter. “You do not own Web3. It belongs to venture capital companies and their partners.” That is, the people who early secured many of these coins – and now have an interest in persuading others to come on board.

YouTuber Dan Olson brought this argument up shortly after in a highly regarded video. Those who have already entered Web3 now have a “hot potato” in their hands. He or she paid money, possibly a lot of money, for a ultimately worthless piece of software code, such as a link to a digital image – and now, according to Greater Fool theory, must find an even bigger fool who will pay more to make the investment worthwhile. to calculate.

Whether true or not, many of the often young Web3 small investors use certain codes, such as laser eyes in their profile picture, to identify themselves as part of the conspiracy crypto community. They cheer on each other there. Once you join, there is no going back. “Crypto Bros”, as they are called derogatory, is frowned upon in many online communities. On the Tumblr platform, a dispute erupted within a blog about funny pictures when it emerged that its founder had been involved in a crypto project with so-called NFTs (digital property rights), and the blog was shut down. Fans of the computer game “Stalker” ran storm, when the manufacturer announced that it wanted to work with NFTs. Organize English football fans transparent against “tokenization” (cryptocurrency) of their clubs by the company Socios.

So is it, as he claims, the revolution of the young savages that Peter Thiel is leading? Youtuber Dan Olson has another theory: he says they are critics of capitalism – those for whom capitalism has not gone far enough.