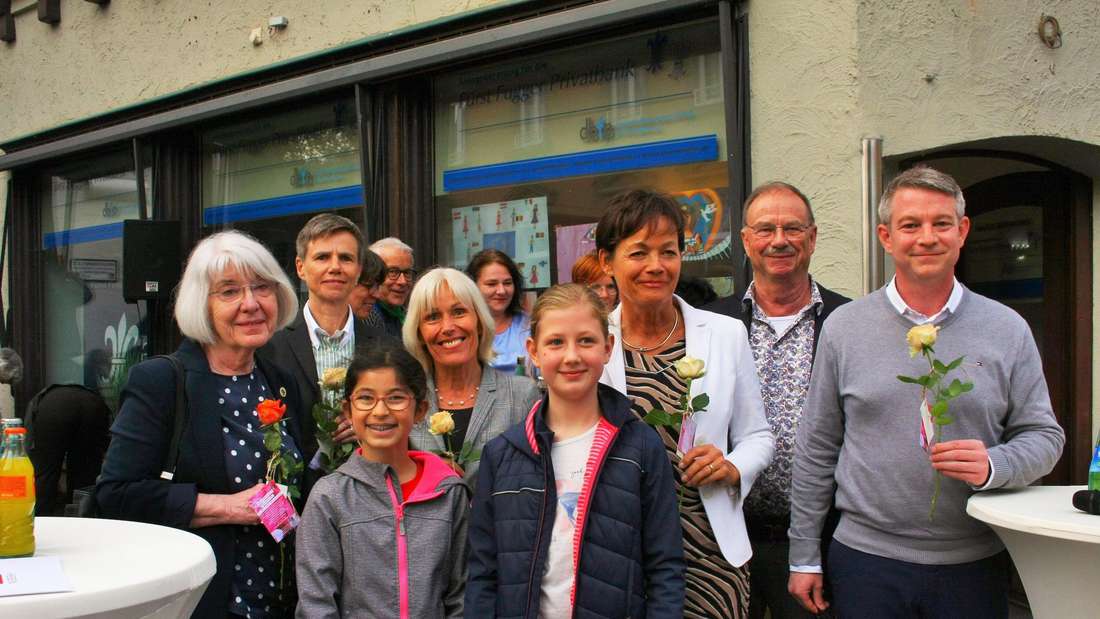 Europe has many faces. A remarkable exhibition in the Büdingen suburb shows how children and young people view the continent, especially now, in wartime.

About 30 paintings and drawings of children and young people from Büdinger Wolfgang-Ernst-Gymnasium and Wölfersheimer Singbergschule and from twin towns in the two municipalities are now available in a pop-up gallery under the motto “Children and young people present their image of Europe” House suburb 25 to visit. On the one hand, they are part of the diverse initiatives that are taking place this summer to put art and culture against vacancies – spontaneously and temporarily, that is, ‘appearing’ and disappearing again.

On the other hand, the works of young people, which impressively testify to the longing for peace, freedom and effective protection of the land, are part of a collaboration between the friendship and partnership associations in the region and Europa-Union Wetterau, led by Dr. John Finished. Sieglinde Huxhorn-Engler, president of the affiliated Büdinger Association, Sieglinde Huxhorn-Engler, and numerous other representatives of politics and culture, were now able to take him and the Hessian Minister of Federal and European Affairs, Lucia Puttrich (CDU) and the member. by the Bundestag Bettina Müller (SPD), to the vernissage at the entrance welcome to the suburbs during the Europe Week in Büdingen.

In his speech, Huxhorn-Engler especially thanked the young artists between the ages of 11 and 18, who included not only high school students from the two municipalities of Büdingen and Wölfersheim, but also representatives from Romania, France and Slovakia, who had submitted their works. with the mail. At the same time, she praised the cooperation with the European Union and the friendly partnership association in Wölfersheim and emphasized: “Especially in the light of the war in Ukraine, these images give courage for a generation growing up here that really wants a Europe of equality, unity in diversity, longing for cohesion and opportunity, believing in it, wanting to work on it and making all of us responsible as a generation of adults.If this Europe gets its chance, I do not fear for the future.

Minister for Europe Lucia Puttrich emphasized in her keynote speech how important it is, especially in times of crisis, to recall the image of Europe as the largest peace project in the world, which after the horrors of World War II was initially founded as a coal and steel union to combine viable mutual economic, cultural, political and social relations in order to lay a lasting foundation for a peaceful Europe. “While in the past Europe was often associated with bureaucracy and remote and cumbersome apparatus in Brussels and Strasbourg, which tend to make life difficult for ordinary people with numerous rules, the impressive works of art of these children and young people are reminiscent of original source and justification. for the European idea: partnership and exchange instead of armed conflict. ”In the world that has changed since Russia invaded Ukraine, she always has full concentration, direct dismay, sometimes fear, but always with her many visits to schools and conversations with young people felt the will to be active for Europe and peace, which personally impressed her a lot.The Minister strongly recommended to visit the exhibition, which lasts until 15 May, and enter into dialogue with children and young people.

Bettina Müller, a member of the Bundestag, was also impressed by the importance of the presentation, which in addition to paintings also included a video performance about the formation of a peace sign at Singberg School and a poetic and programmatic elaboration under the motto “We move to peace” for it advanced German course showing Q2. Further greetings followed from Johannes Fertig, who pointed to similar perspectives for cooperation in the future, and Mayor Benjamin Harris (CDU), who stressed that politicians should be role models and beacons of hope for the next generation in their commitment to peace on a little. and large scale. First City Councilor Katja Euler (SPD) described art and culture and those who support them, from the youngest to the oldest, as “the largest peace movement in the world” with great charisma.

The music and art school’s (Muks) wind quintet under the direction of Thomas Charly Appel, who is also part of the orchestra for the voluntary fire brigade in the city of Büdingen. designed the reception for the opening on the corner of Pferdsbacher Weg and Vorstadt with the Eurovision melody and the European anthem based on Beethoven. The musicians set impressive accents that underscored the concerns of the week and the show.