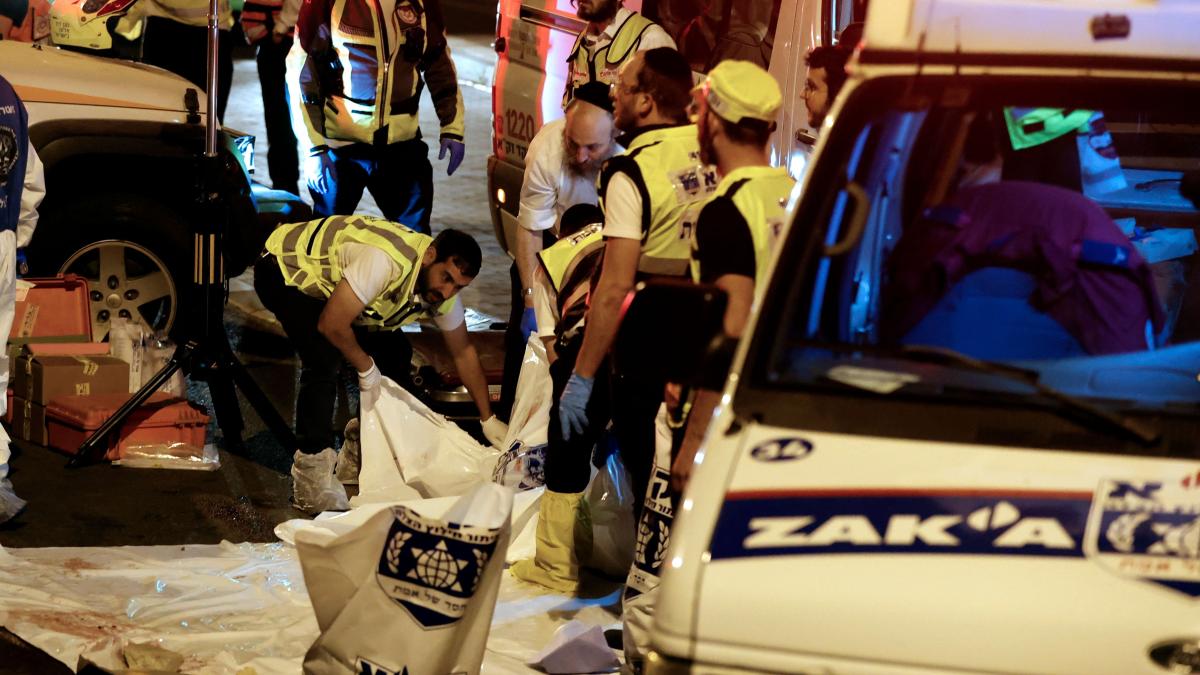 At least three people died in an attack in Israel and four others were injured. Police are looking for a 19-year-old and a 20-year-old Palestinian man who allegedly used a gun and an ax to attack passers-by in the strictly religious city of Elad.

DIsraeli police are searching for the two suspected Palestinian attackers after a deadly knife attack near Tel Aviv. Police said Friday they were looking for a 19-year-old and a 20-year-old from the West Bank city of Jenin.

Three people were killed in the attack Thursday night in the strictly religious city of Elad. One of the perpetrators shot, another attacked passers-by with an ax. According to a rescue service, four people were injured in the attack. Schiba Hospital announced Friday morning that one of the injured was still in critical condition.

According to the Israeli newspaper Haaretz, the victims are three ultra-Orthodox men in their 40s who were the fathers of a total of 16 children.

“We will arrest the terrorists and their supporters and they will pay the price,” Israeli Prime Minister Naftali Bennett said in a statement. Defense Secretary Benny Gantz announced measures to prevent the attackers from “fleeing” to the occupied West Bank.

US Secretary of State Antony Blinken tweeted that the United States “strongly condemns today’s terrorist attack in Israel.” Palestinian President Mahmoud Abbas condemned the “killing of Israeli civilians” in Elad and warned that it could lead to a spiral of violence.

The radical Islamist Hamas, which controls the Gaza Strip, welcomed the alleged attack. “This operation shows the anger of our people over the occupiers’ attacks on holy sites,” said Hamas spokesman Hazem Qassem. “The storming of the Al-Aqsa Mosque must not go unpunished.”

Tensions between Israel and the Palestinians have risen sharply in recent weeks. Only on Thursday was there another clash between Palestinians and Israeli security forces on Temple Mount near the Al-Aqsa Mosque. There have been regular riots there since April, leaving hundreds injured.

Israel has also been rocked by a series of anti-Israel attacks for weeks. From March 22 to Thursday, 15 people were killed. During operations by the Israeli security forces in the occupied West Bank, 27 Palestinians and three Arab Israelis, among others, were killed, including several suspected assassins.