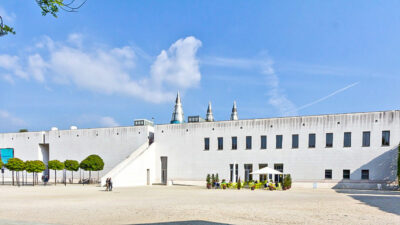 The Federal Republic’s art collection should reflect current developments in the visual arts. From Saturday, the Bundeskunsthalle in Bonn will present new acquisitions from the past five years, a time of political and social change.

A woman hangs in the air: The African migrant, drawn by Bussaraporn Thongchai in black pastel, remains seated without a chair. Her hands are crossed on her lap as if she were bound. The drawing of the Thai woman living in Berlin is the cover image of the presentation of new acquisitions in the federal art collection. The exhibition “Identity not proven. Collection of Modern Art from the Federal Republic of Germany “shows about 170 current works acquired between 2017 and 2021 from Saturday to October 3. One can see installations, drawings, paintings, sculptures, photographs and video works.

The title “Identity not proven”, which Thongchai gave his drawing in 2018, represents the main concern of the exhibition, explains curator Susanne Kleine. “In a time of political and thus social change, nothing is safe anymore, and one’s own identity is not self-evident or even verifiable.” Thongchai’s painting is part of a series of works in which the artist processed the experiences of migrant women in Berlin. The East African woman pictured on the drawing failed to open a bank account because she only had a permit and no passport. Your application was rejected with the remark “Identity not proven”.

Search for individual and social identity

The search for individual and social identity is a topic that artists have been particularly interested in in recent years, says Kleine. This is reflected in the purchases for the federal art collection, which is to represent the current developments in the visual arts. The new acquisitions of the art collection founded in 1970 are now being presented to the public for the fifth time in the Bundeskunsthalle. The works are selected by a commission of five people, which is renewed every five years.

The experts from the most recent commission had a total of 2.5 million euros available, for which they acquired 120 works over the past five years. In addition, two million euros were available from the special program “Neustart Kultur” in 2020, of which 240 works have been purchased so far. The collection now includes a total of 2,150 works from all areas of contemporary art.

Changes in Germany as a country of immigration

A theme that runs as a common thread through the exhibition is the question of the political, cultural and social changes in the immigration country of Germany, says Kleine. “Especially as a result of migration, identities are more multiple and no longer fixed, and that is changing us and our society.”

It is also about the Berlin artist Sung Tieu, who was born in Vietnam. She used a nine-page application form for the naturalization of a minor in the Federal Republic of Germany as the background for her drawings depicting chess moves: a confrontation with German bureaucracy in which applicants may feel as helpless as chess pieces.

The relationship to xenophobia, right-wing extremism and solidarity

With her neon writing “Die Deutsche Population”, Silke Wagner visualizes the relationship between xenophobia, right-wing extremism, solidarity and indifference in the German population. Each of the positions is represented by a different color. Pink letters, which stand for solidarity, are least represented.

A marked development in art production in recent years is that artists are increasingly embarking on a historical, often very personal search for traces, says Kleine. An example is the work of Ayala Shoshana Guy. The Jerusalem-born artist belongs to the second generation of a family of Holocaust survivors. Her artfully produced video “I Will Take Your Shadow” tells the story of her grandfather and his brothers’ escape from the National Socialists from their hometown of Vienna with hundreds of monotypes and black-and-white drawings. (epd / me)