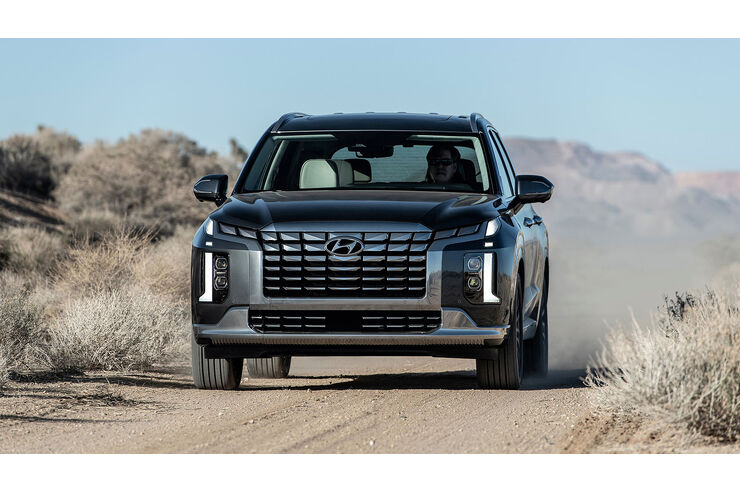 Hyundai is equipping its flagship SUV for the second half of its life. Palisade sold in the United States received many innovations during its facelift.

Hyundai is also participating in the SUV parade called the New York International Auto Show. At the auto show, which runs until April 24, the Koreans present the facelift to the Palisade, which should be in the middle of its modeling cycle. This brings the usual optical retouching, some updates in the interior and in technology as well as a new model variant for the flagship SUV, which is only offered in the US and starts with the changes in the 2023 model year.

The front redesign is particularly extensive. Here, Palisade gets a new bumper, different headlights with newly designed LED daytime running lights signature, now vertically adjusted, and an even larger grille. We also see a modified apron on the back; like the front counterpart, this also shows a clearly shown underrun protection. In the side picture, the newly designed 20-inch alloy wheels and modified side mirrors, which can now also dampen automatically, are striking. Incidentally, not only the optics but also the aerodynamics should benefit from the measures.

There is also a lot of new in the interior: compared to the pre-facelift model, the dashboard has a more modern design – including slimmer air nozzles – and also has a differently designed digital instrument cluster and a new infotainment interface. The steering wheel design is just as new as the seats, which are also upholstered in different materials. According to Hyundai, the driver’s seat should have been shaped more ergonomically. 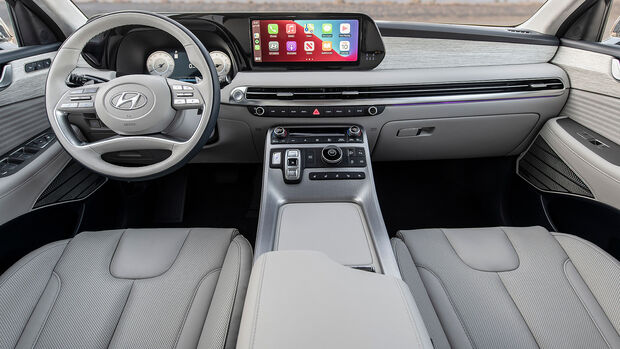 Inside, Hyundai is extensively upgrading the palisade for the facelift.

If the Palisade has the configuration with eight seats, the second row has adjustable armrests on board. However, folding headrests and seat ventilation are also available for the 7-seater configuration, which has particularly comfortable captain’s chairs in the second row. In the future, the third row can be equipped with seat heating. In the top-of-the-line Calligraphy version, the rear side windows have an acoustic coating.

When it comes to the screens, Hyundai has not only upgraded the central touch screen to twelve inches and 720 pixel resolution, but also replaced the classic interior mirror with a screen that displays a camera image. Instead of USB-A, USB-C connections will be available from now on, and Hyundai will also have optimized speech recognition. In addition, the palisade can now be used as a WLAN hotspot and can be opened, closed and started with the mobile phone as a car key. Smartphones can be charged with more power, and the connectivity features, summarized by Hyundai under the keyword Bluelink, also have additional features.

New assistant systems come in the form of an automatic emergency braking system, which also recognizes cyclists and oncoming drivers, and a motorway assistant with navigation-based cruise control. Palisade can also be parked remotely in the future and avoids collisions when maneuvering backwards. Passive safety is aided by new side airbags in the rear seat row; the total number of airbags increases to nine.

Hyundai is using the facelift to provide the Palisade with new off-road equipment called the XRT. Here, the underrun protection elements appear even more robust, the doors are covered with plastic in the lower area and the 20-inch wheels, which are always black, have their own design. There are also other basic black design details in the form of the radiator grille and the roof rails. Inside there is always a conventional sunroof and black faux leather upholstery for the seats. 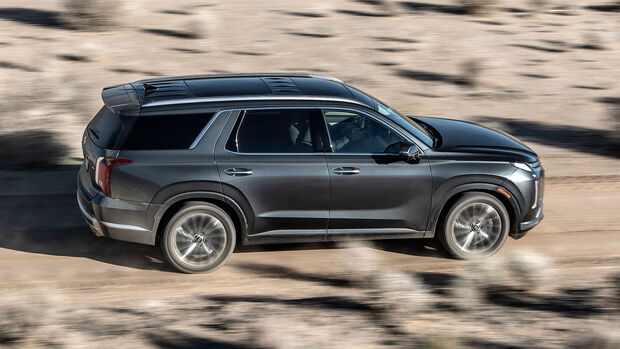 All the same when it comes to driving: the 3.8-liter V6 distributes its power variably to all wheels.

As for the drive, everything remains the same for both the standard Palisade and the new XRT version. The only engine available is a 3.8-liter V6 petrol engine that operates on the Atkinson combustion principle. It provides 295 hp and a maximum of 355 Newton meters of torque. The eight-speed dual-clutch transmission transmits power variably to the rear wheels or all wheels. In addition to various modes, the four-wheel drive now also offers a towing function, where the lower gears are turned more out to make better use of the engine’s torque.

The 2023 model Palisade will be available at North American Hyundai dealers this summer. Prices are still unknown. The SUV currently starts at $ 33,350, which is equivalent to almost 31,000 euros.

Yes. A large SUV with a thick internal combustion engine and a comfortable orientation would fit well with the brand.

no SUV series is big enough and without electrification we absolutely do not need the model.

These are the usual but relatively profound changes that Hyundai USA is making in Palisade’s facelift. The look is fresher both outside and inside, the technology benefits in terms of security and connectivity. Nothing happens to the drive, which means there are no signs of electrification.