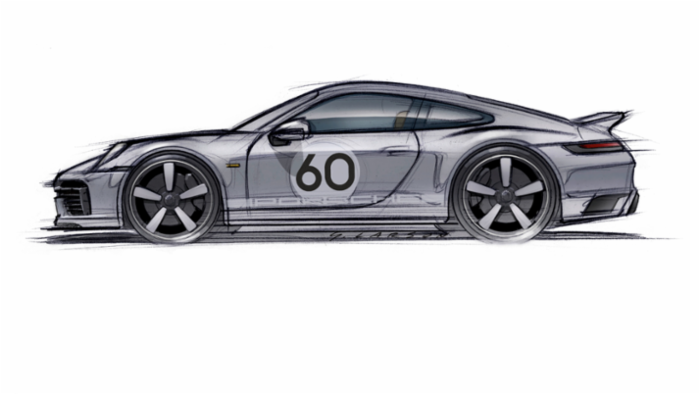 How did the story of Sport Classic really start?

Apenbrink: “In 2009, we revived complex vehicle projects with the Sport Classic in Porsche Exclusive Manufacturing, then still called Porsche Exclusive. In fact, everyone was convinced – and this has been the case with all Exclusive small series – that any reason for a vehicle is a stand-alone one. For that was the strategy: There is an occasion – exactly once. And next time, we’ll come up with a new topic. But we have often heard the question from customers: ‘When are you going to make another Sport Classic?’ ”

Larson: “Even though only 250 of the first Sport Classic were built, the vehicle still has an incredible presence and is in the minds of an extremely large number of people – not only on Instagram or Facebook – but also for Porsche meetings and the like.”

Apenbrink: “Yes, it’s the kind of vehicle you hear over and over again: ‘It turns your head’.”

New Porsche 911 Sport Classic: Back to the future

With the new 911 Sport Classic, Porsche presents the second of a total of four collectibles from the Heritage Design Strategy.

What does the name “Sport Classic” mean? Is there a story about it, or may we not tell it?

Apenbrink: “In the beginning, there was a working title. At that time, we worked out three concepts for the first small series in a workshop – one of them was a ‘Classic Coupé’. The exact wording was ‘a classic coupe with the most important design elements from Porsche’s history’. When we said ‘classic’, we meant a pure kind of Porsche sports car. But adopting the working title would have been too easy, so we went through the history of Porsche car names. We stuck with the SC, which at the time was called the Super Carrera, because it fit perfectly with the vehicle’s product fabric. The shorter a name is on the boot lid, the better and so we dreamed of 911 SC. In the end, however, the naming rights to the ‘SC’ had already been granted and our vehicle was not a 1: 1 successor to the 911 Porsche SC at the time. So we kept looking and went from Super Carrera to Sport Classic. A classic sports car with a manual gearbox, rear-wheel drive, an improved engine and typical Gran Turismo equipment – in fact a Sport Classic. ”

When you decided on a new Sport Classic, were there any difficulties or special obstacles that needed to be overcome? Or did the idea stand, everyone was excited and we went?

Larson: “I do not want to call it a difficulty – the biggest challenge was clearly the rear fenders. We really wanted the wide jaws, but without the air intake. But there were no tools for that, so we had to fool around a bit with the experimental tool. May we say that? ”

Apenbrink: (laughs) “Yes, we can say that. As Grant just suggested, we really want the sculptural form, the broad body with nice curves. But we can not demand millions in development costs, we always need good ideas. And that was when we got the idea to further develop and use the method tool, which is actually used for pre-series, for actual production as a small series tool.An unusual approach that actually made the impossible possible.But basically one can say: None of These cars are home-based.There is a lot to do before the day when the vehicles are at the fair and many decision makers need to be convinced.Care series vehicles always polarize something – very deliberately.They are often not self-explanatory either.That’s it, that makes it so appealing.It takes a lot of passion and persuasiveness to bring these vehicles from idea to decision and development to goal.It requires a small, committed team that believes in it, fights for it and does not want to be deterred. “

And yet it is here now, the new 911 Sport Classic, with duck tail and all accessories. Are there elements that have their own development history, or is the back end the most distinctive?

Larson: “In addition to the duck tail, we also included the design of Fuchsfelge®. There have always been different interpretations of the past, but with the Sport Classic we are closer to the original than ever before. The recesses in the roof are also unusual. They prevented the 2009 original from becoming sold in the United States at the time. ”

Apenbrink: “Oh yes, good point. Let’s talk about the roof. It did not exist at Porsche until the first Sport Classic.”

Apenbrink: “There are now a few who have managed to import a 997 Sport Classic and who proudly present them at the various car shows and Concours d’Elegance events. But now the ‘double bubble’ of the new 911 Sport Classic is available for the first time. time in the US – it’s a huge step. “

Milosevic: Another huge step: Both the first Sport Classic and now the new one have a striped design that matches ‘Double Bubbles’, very subtle, tone in tone. With the 997 it was a relatively light shade of gray with darker stripes, now it’s just the opposite: the exterior color is darker and more modern, the stripes are a little lighter. But – and that’s the point – no longer attached to the vehicle as a sticker as last, but painted. It’s a big leap compared to its predecessor. If you run your fingers over the two strips, you will immediately notice the beautiful, smooth surface. This has been made much more complex and very noble. “

Let’s talk about the interior. There are also some special features – the interior package Paldao for example. Is there more to it than pure optics?

Holzinger: “From 1964 to 1967, we offered mahogany veneers in a natural matte finish on the dashboard and steering wheel in the Porsche models. It was the historical template. We wanted natural materials In addition to leather, wood is also used in vehicle interiors as a high-quality and renewable natural product. The components of the interior have been improved by the processing of high quality materials. “

Apenbrink: We built the millionth 911 at the time, as a nod to Ferry Porsche’s company car ‘. Irish green on the outside, houndstooth pattern on the seats and classic wood on the inside. Customers still associate it with the early 911s today. Wood is very rarely chosen for modern 911s, and much more frequently for four-door models like the Macan, as customers compare these models much more closely with vehicles from other manufacturers. It’s usually there, but quite rarely in 911. Paldao has – this’s how I perceive it at least – for our customers for the first time this coolness, so when they look into the interior they say: ‘Oh, now I’re seriously considering taking a 911 with wooden interior for the first time. “

Holzinger: “It is also because it is a device with open pores. This open pore gives the whole thing a modern look with a natural feel that makes it modern. At the same time, it is a tribute to the sixties. ”

Speaking of tribute. Next keywords are: Pepita. This was also taken up again for historical reasons, right?

Holzinger: “Yes, it comes straight from Porsche’s history. Pepita was originally offered as an option in the final stages of the 356’s. But very occasionally, only on request. It was officially mentioned for the first time in 1965 in the equipment catalog of the original 911. “

Apenbrink: “Pepita is still one of the most coveted patterns today when customers ask for special options that are not listed in the regular catalog because the drug is associated with Porsche by many.”

Let’s talk about the instrument group. As with the Targa, the tachometer is based on the 356’s. These parallels and the green color – what is the point?

Larson: “The numbers were already green in the 356s and in the 911s until 1967. After that they were no more. The technology was simple then: there was a shift between the chrome ring, the glass and the dial in the instruments. The instruments were of course illuminated from the outside through this “The hands were treated with green phosphorus, as you see on the glowing toy.”

Apenbrink: “Or like the second hand in a classic watch.”

Holzinger: “Back then, technology was simply not advanced enough to provide backlighting with your own light source, and phosphorus was used for afterglow.”

Apenbrink: “I remember sitting in historic Porsches thinking, ‘You can barely see your hands.’ But logically, when the phosphorus is no longer effective, nothing glows anymore.”

Larson: “These green elements can also often be found in the instruments of the newer models. This has become a classic, although of course phosphorus has not been used for a long time. “

Thank you for the interview.